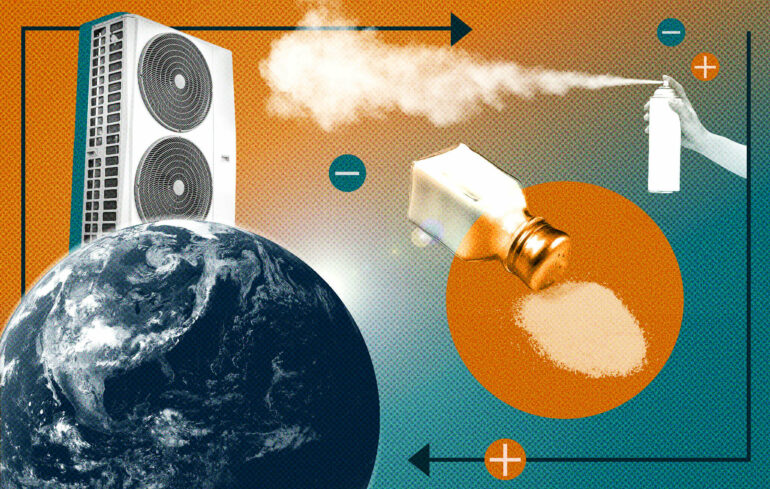 Adding salt to a road before a winter storm changes when ice will form. Researchers at the Department of Energy’s Lawrence Berkeley National Laboratory (Berkeley Lab) have applied this basic concept to develop a new method of heating and cooling. The technique, which they have named “ionocaloric cooling,” is described in a paper published Dec. 23 in the journal Science.

Ionocaloric cooling takes advantage of how energy, or heat, is stored or released when a material changes phase—such as changing from solid ice to liquid water. Melting a material absorbs heat from the surroundings, while solidifying it releases heat. The ionocaloric cycle causes this phase and temperature change through the flow of ions (electrically charged atoms or molecules) which come from a salt.

Researchers hope that the method could one day provide efficient heating and cooling, which accounts for more than half of the energy used in homes, and help phase out current “vapor compression” systems, which use gases with high global warming potential as refrigerants. Ionocaloric refrigeration would eliminate the risk of such gases escaping into the atmosphere by replacing them with solid and liquid components.

“The landscape of refrigerants is an unsolved problem: No one has successfully developed an alternative solution that makes stuff cold, works efficiently, is safe, and doesn’t hurt the environment,” said Drew Lilley, a graduate research assistant at Berkeley Lab and Ph.D. candidate at UC Berkeley who led the study. “We think the ionocaloric cycle has the potential to meet all those goals if realized appropriately.”

Finding a solution that replaces current refrigerants is essential for countries to meet climate change goals, such as those in the Kigali Amendment (accepted by 145 parties, including the United States in October 2022). The agreement commits signatories to reduce production and consumption of hydrofluorocarbons (HFCs) by at least 80% over the next 25 years. HFCs are powerful greenhouse gases commonly found in refrigerators and air conditioning systems, and can trap heat thousands of times as effectively as carbon dioxide.

The new ionocaloric cycle joins several other kinds of “caloric” cooling in development. Those techniques use different methods—including magnetism, pressure, stretching, and electric fields—to manipulate solid materials so that they absorb or release heat. Ionocaloric cooling differs by using ions to drive solid-to-liquid phase changes. Using a liquid has the added benefit of making the material pumpable, making it easier to get heat in or out of the system—something solid-state cooling has struggled with.

Lilley and corresponding author Ravi Prasher, a research affiliate in Berkeley Lab’s Energy Technologies Area and adjunct professor in mechanical engineering at UC Berkeley, laid out the theory underlying the ionocaloric cycle. They calculated that it has the potential to compete with or even exceed the efficiency of gaseous refrigerants found in the majority of systems today.

They also demonstrated the technique experimentally. Lilley used a salt made with iodine and sodium, alongside ethylene carbonate, a common organic solvent used in lithium-ion batteries.

“There’s potential to have refrigerants that are not just GWP [global warming potential]-zero, but GWP-negative,” Lilley said. “Using a material like ethylene carbonate could actually be carbon-negative, because you produce it by using carbon dioxide as an input. This could give us a place to use CO2 from carbon capture.”

Running current through the system moves the ions, changing the material’s melting point. When it melts, the material absorbs heat from the surroundings, and when the ions are removed and the material solidifies, it gives heat back. The first experiment showed a temperature change of 25 degrees Celsius using less than one volt, a greater temperature lift than demonstrated by other caloric technologies.

“There are three things we’re trying to balance: the GWP of the refrigerant, energy efficiency, and the cost of the equipment itself,” Prasher said. “From the first try, our data looks very promising on all three of these aspects.”

While caloric methods are often discussed in terms of their cooling power, the cycles can also be harnessed for applications such as water heating or industrial heating. The ionocaloric team is continuing work on prototypes to determine how the technique might scale to support large amounts of cooling, improve the amount of temperature change the system can support, and improve the efficiency.

“We have this brand-new thermodynamic cycle and framework that brings together elements from different fields, and we’ve shown that it can work,” Prasher said. “Now, it’s time for experimentation to test different combinations of materials and techniques to meet the engineering challenges.”

Lilley and Prasher have received a provisional patent for the ionocaloric refrigeration cycle, and the technology is now available for licensing.