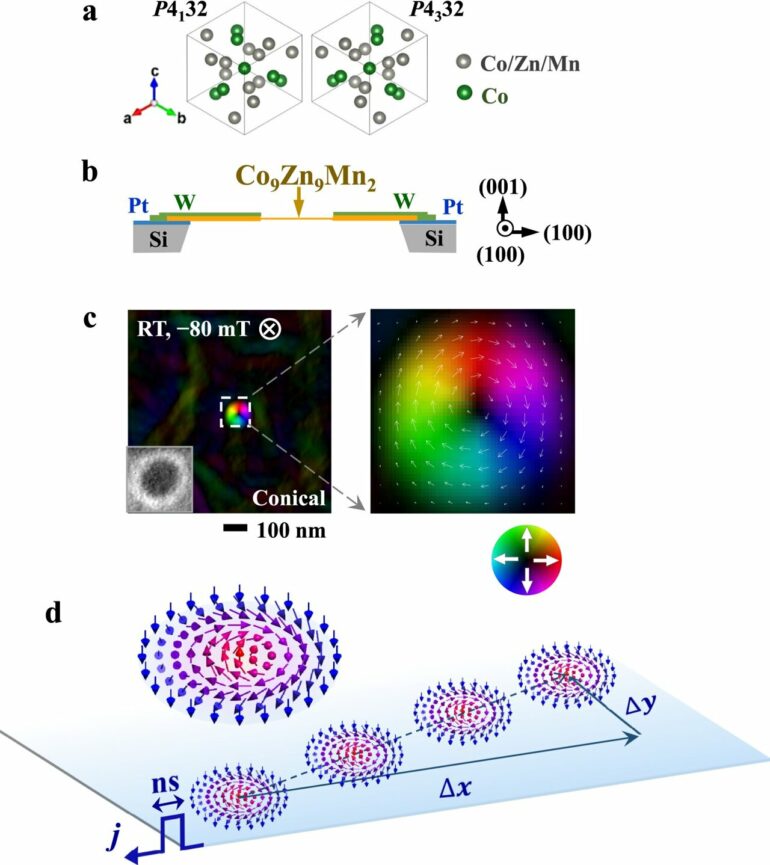 Scientists from the RIKEN Center for Emergent Matter Science and collaborators have shown that they can manipulate single skyrmions—tiny magnetic vortices that could be used as computing bits in future ultra-dense information storage devices—using pulses of electric current, at room temperature.

Skyrmions—tiny particles that can be moved under small electric currents several orders lower than those used for driving magnetic domain walls—are being studied in the hope of developing promising applications in data storage devices with low energy consumption. The key to creating spintronics devices is the ability to effectively manipulate, and measure, a single tiny vortex.

Most research to date has focused on the dynamics for skyrmions a micrometer or more in size or skyrmion clusters stabilized below room temperature. For the current research, published in Nature Communications, the researchers used a thin magnetic plate made up of a compound of cobalt, zinc, and manganese, Co9Zn9Mn2, which is known as a chiral-lattice magnet. They directly observed the dynamics of a single skyrmion, with a size of 100 nanometers, at room temperature using Lorentz transmission electron microscopy. They were able to track the motions of the skyrmion and control its Hall motion directions by flipping the magnetic field, when they subjected it to ultrafast pulses of electric current—on the scale of nanoseconds. The group found that the skyrmion’s motion demonstrated a dynamic transition from a pinned static state to a flow motion by way of creep motion under the stimulus of electric current, and quantified the relatively fast velocity of the skyrmion, over 3 meters per second.

According to first author Licong Peng, a special postdoctoral researcher at RIKEN CEMS, “This is very exciting, because for the first time, we have been able to use electrical currents to manipulate single skyrmions at room temperature in chiral-lattice magnets.”

According to Xiuzhen Yu, the leader of the research group, “This research will lead to further studies of dynamics of various topological spin textures, leading to the development of skyrmion-based devices.”