Strobe light for 5G: NIST imaging system spotlights the tiny mechanical hearts at the core of every cellphone 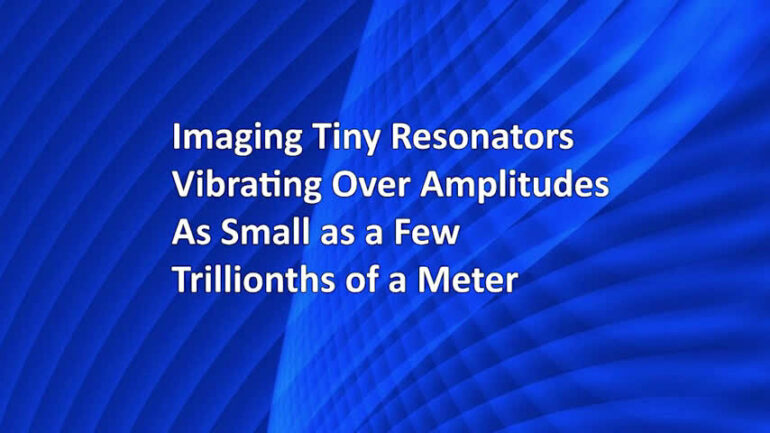 Inside every cellphone lies a tiny mechanical heart, beating several billion times a second. These micromechanical resonators play an essential role in cellphone communication. Buffeted by the cacophony of radio frequencies in the airwaves, these resonators select just the right frequencies for transmitting and receiving signals between mobile devices.

With the growing importance of these resonators, scientists need a reliable and efficient way to make sure the devices are working properly. That’s best accomplished by carefully studying the acoustic waves that the resonators generate.

Now, researchers at the National Institute of Standards and Technology (NIST) and their colleagues have developed an instrument to image these acoustic waves over a wide range of frequencies and produce “movies” of them with unprecedented detail.

The researchers measured acoustic vibrations as rapid as 12 gigahertz (GHz, or billions of cycles per second) and may be able to extend those measurements to 25 GHz, providing the necessary frequency coverage for 5G communications as well as for potentially powerful future applications in quantum information.

The challenge of measuring these acoustic vibrations is likely to increase as 5G networks dominate wireless communications, generating even tinier acoustic waves.

The new NIST instrument captures these waves in action by relying on a device known as an optical interferometer. The illumination source for this interferometer, ordinarily a steady beam of laser light, is in this case a laser that pulses 50 million times a second, which is significantly slower than the vibrations being measured.

The laser interferometer compares two pulses of laser light that travel along different paths. One pulse travels through a microscope that focuses the laser light on a vibrating micromechanical resonator and is then reflected back. The other pulse acts as a reference, traveling along a path that is continually adjusted so that its length is within a micrometer (one millionth of a meter) of the distance traveled by the first pulse.

When the two pulses meet, the light waves from each pulse overlap, creating an interference pattern—a set of dark and light fringes where the waves cancel or reinforce one another. As subsequent laser pulses enter the interferometer, the interference pattern changes as the microresonator vibrates up and down. From the changing pattern of the fringes, researchers can measure the height (amplitude) and phase of the vibrations at the location of the laser spot on the micromechanical resonator.

NIST researcher Jason Gorman and his colleagues deliberately chose a reference laser that pulses between 20 and 250 times more slowly than the frequency at which the micromechanical resonator vibrates. That strategy enabled the laser pulses illuminating the resonator to, in effect, slow down the acoustic vibrations, similar to the way that a strobe light appears to slow down dancers in a nightclub.

The slowdown, which converts acoustic vibrations that oscillate at GHz frequencies to megahertz (MHz, millions of cycles per second), is important because the light detectors used by the NIST team operate much more precisely, with less noise, at these lower frequencies.

“Moving to lower frequencies removes interference from communication signals typically found at microwave frequencies and allows us to use photodetectors with lower electrical noise,” said Gorman.

Each pulse lasts only 120 femtoseconds (quadrillionths of a second), providing highly precise moment-to-moment information on the vibrations. The laser scans across the micromechanical resonator so that the amplitude and phase of the vibrations can be sampled across the entire surface of the vibrating device, producing high-resolution images over a wide range of microwave frequencies.

By combining these measurements, averaged over many samples, the researchers can create three-dimensional movies of a microresonator’s vibrational modes. Two types of microresonators were used in the study; one had dimensions of 12 micrometers (millionths of a meter) by 65 micrometers; the other measured 75 micrometers on a side—about the width of a human hair.

Not only can the images and movies reveal whether a micromechanical resonator is operating as expected, they can also indicate problem areas, such as places where acoustic energy is leaking out of the resonator. The leaks make resonators less efficient and lead to loss of information in quantum acoustic systems. By pinpointing problematic areas, the technique gives scientists the information they need to improve resonator design.

In the Feb. 4, 2022, edition of Nature Communications, the researchers reported that they could image acoustic vibrations that have an amplitude (height) as small as 55 femtometers (quadrillionths of a meter), about one-five-hundredth the diameter of a hydrogen atom.

Over the past decade, physicists have suggested that micromechanical resonators in this frequency range may also serve to store fragile quantum information and to transfer the data from one part of a quantum computer to another.

Establishing an imaging system that can routinely measure micromechanical resonators for these applications will require further research. But the current study is already a milestone in assessing the ability of micromechanical resonators to accurately perform at the high frequencies that will be required for effective communication and for quantum computing in the near future, Gorman said.

Citation:
Strobe light for 5G: NIST imaging system spotlights the tiny mechanical hearts at the core of every cellphone (2022, February 5)