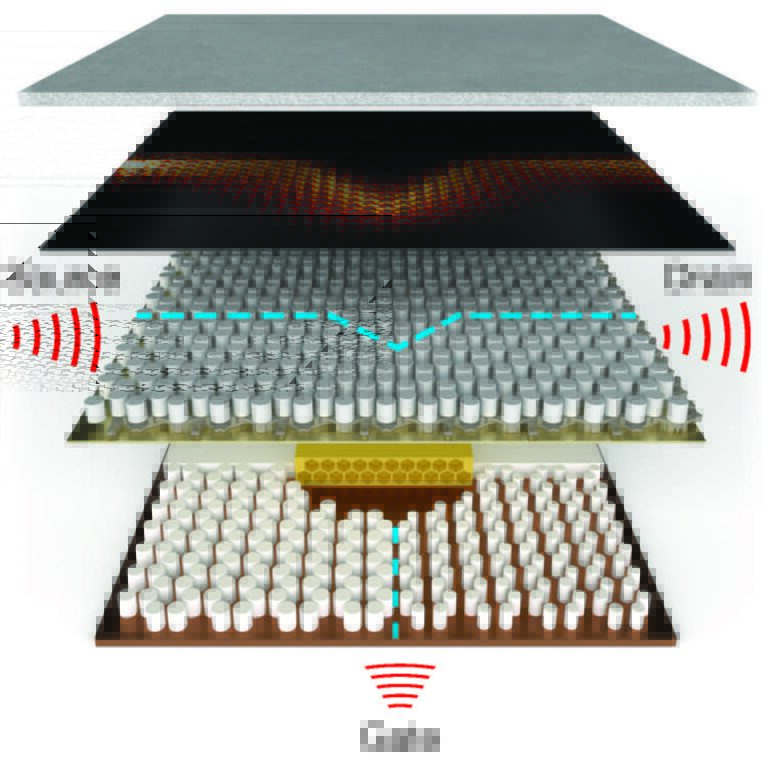 Now, Harvard University researchers have designed and simulated the first topological acoustic transistors—with sound waves instead of electrons—and proposed a connection architecture to form a universal logic gate that can switch the flow of sound on and off.

“Since the advent of topological materials around 2007, there has been a lot of interest in developing a topological electronic transistor,” said Jenny Hoffman, the Clowes Professor of Science at the Harvard John A. Paulson School of Engineering and Applied Sciences (SEAS) and the Department of Physics. “Although the materials we used won’t yield an electronic topological transistor, our general design process applies to both quantum materials and photonic crystals, raising hopes that electronic and optical equivalents may not be far behind.”

The research is published in Physical Review Letters.

“The equations for sound waves are exactly solvable, which allowed us to numerically find just the right combination of materials to design a topological acoustic waveguide that turns on when heated, and off when cooled,” said Harris Pirie, a former graduate student in the Department of Physics and first author of the paper.

The researchers used a honeycomb lattice of steel pillars anchored to a high-thermal-expansion plate, sealed in an air-tight box. The lattice has slightly larger pillars on one half, and slightly smaller pillars on the other half. These differences in size and spacing of the pillars determine the topology of the lattice, whether sound waves can travel along a designated channel or not. The researchers then designed a second device that converts ultrasound into heat.

The heat expands the pillar lattice and changes the topology of the waveguide. When coupled together, these two devices allow the output of one waveguide to control the state of the next, just as the electrons flowing in a conventional transistor can toggle other transistors.

These acoustic topological switches are scalable, meaning the same design used with ultrasonic frequencies at the centimeter scale could also work at sub-millimeter sizes and frequencies commonly used to transmit surface acoustic waves, which may help to overcome limitations in integrated phononic circuits.

These acoustic metamaterials could also be used as a teaching tool.

“Unlike quantum-mechanical systems, acoustic metamaterials are straightforward, tangible, and intuitive. They serve as an accessible entry point to cutting edge topics in condensed matter physics, including topological insulators,” said Hoffman.

The team plans to make a public-facing demonstration of these devices that students or museum visitors can touch, toggle, and hear.