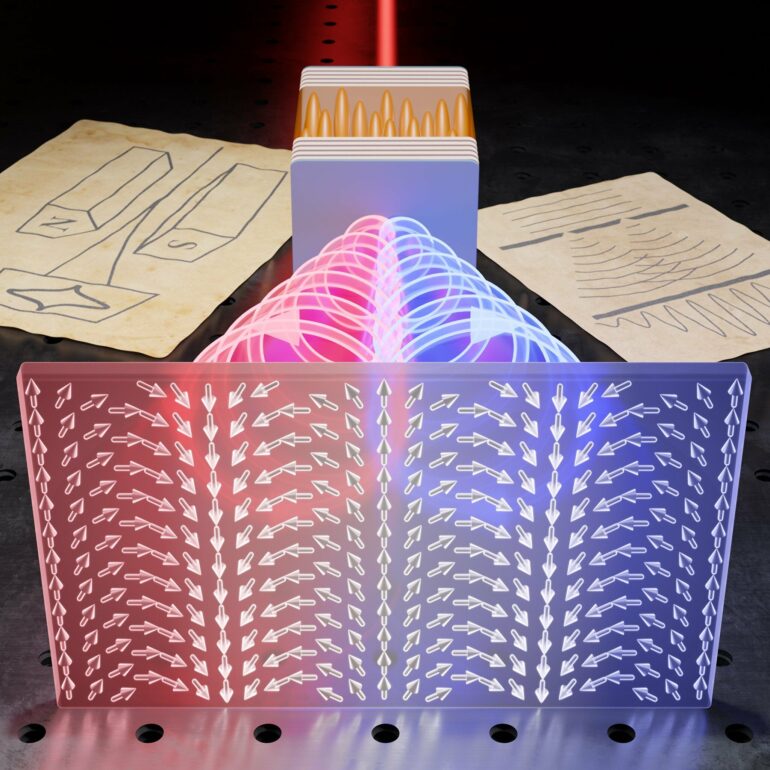 Scientists have, for the first time, demonstrated Young’s experiment for photons in the reciprocal space. Spin patterns corresponding to the persistent spin helix and the Stern-Gerlach experiment are realized in an optically anisotropic liquid crystal microcavity. By applying electric voltage across the microcavity, the liquid crystal molecules inside could be rotated in such a way that the light passing through the cavity was forced to change its internal state into right- and left-handed circular polarized components.

Young’s experiment from almost 220 years ago shows that when light waves pass through two slits in a plate they undergo diffraction that creates an image composed of many fringes (the so-called interference image). The closer the slits are to each other, the further the interference fringes are separated. In this way, the two slits transform information about the light from position space into the so-called “reciprocal space”—the space of directions. Changing the distance between the slits changes the angle (and thus direction) at which the light is diffracted. From 1801, Young’s experiment has been carried out not only on light, but also on electrons, atoms and even large molecules.

It turns out that a similar experiment can be performed in reciprocal space where light beams emitted in two directions should also lead to a periodic pattern in position space.

In an article published in Physical Review Letters, scientists from the University of Warsaw, the Military University of Technology in Warsaw, Institute of Physics Polish Academy of Sciences and the University of Southampton demonstrated Young’s experiment for photons in the reciprocal space. For this purpose, a special optical microcavity filled with a liquid crystal was prepared. The microcavity consists of two perfect mirrors located so close to each other that a standing electromagnetic wave is formed inside. By applying electric voltage across the microcavity, the liquid crystal molecules inside could be rotated in such a way that linearly polarized plane wave light passing through the cavity was forced to change its internal state into right- and left-handed circular polarized components that deflected in opposite directions from the original beam path.

It was similar to the situation of Young’s experiment—this time, however, the role of slits was played by two distinguished directions of light in the “reciprocal space.” On the sample surface—that is, on the “position space”—an interference pattern of light polarization was observed, composed of linearly polarized stripes. Previously, a similar phenomenon was observed for electrons—modulation of the polarization of spins of electrons in position space led to the formation of the so-called persistent spin helix. It turned out that the liquid crystal microcavity led to the same mathematical description of such a helix for the electron spin and for the polarization of light. Scientists interpreted this phenomenon as a classic entanglement of two degrees of freedom—the direction and polarization of light.

The observation that the optical microcavity with a liquid crystal, in a way, separates the “spin” of light—with the circular polarization playing the role of the spin—almost coincided with the 100th anniversary of the discovery of spin in the famous experiment of Stern and Gerlach in 1922. Thus, in one work, an optical analogy of two fundamental experiments of quantum mechanics were observed. The work is published in Physical Review Letters.

Controlling electrons and vibrations in a crystal with polarized light