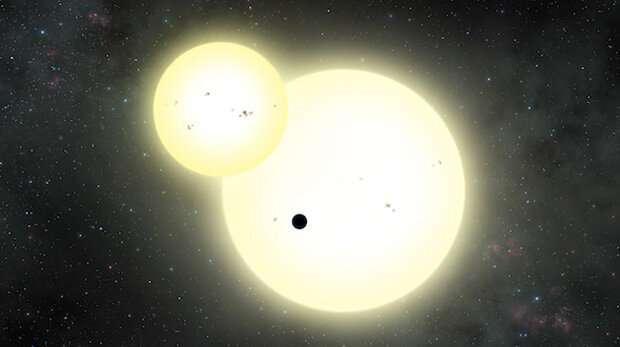 A new technique developed in part by University of Hawaiʻi astronomer Nader Haghighipour has allowed scientists to quickly detect a transiting planet with two suns.

Termed circumbinary planets, these objects orbit around a pair of stars. For years, these planets were merely the subject of science fiction, like Tatooine in Star Wars. However, thanks to NASA’s successful planet-hunting Kepler and Transiting Exoplanet Survey Satellite (TESS) missions, a team of astronomers, including Haghighipour, have found 14 such bodies so far.

Kepler and TESS detect planets via the transit method, where astronomers measure the tiny dimming of a star as a planet passes in front of its host star, blocking some of the starlight. Usually, astronomers need to see at least three of these transits to pin down the planet’s orbit. This becomes challenging when there are two host stars.

“Detecting circumbinary planets is much more complicated than finding planets orbiting single stars. When a planet orbits a double-star system, transits of the same star don’t occur at consistent intervals,” explained Haghighipour. “The planet might transit one star, and then transit the other, before transiting the first star again, and so on.”

Adding to the challenge, the orbital periods of circumbinary planets are always much longer than the orbital period of the binary star. That means, in order to observe three transits, scientists need to observe the binary for a long time. While that was not a problem with the Kepler space telescope (this telescope observed only one region of the sky for 3.5 years), it makes it challenging to use the TESS telescope to detect circumbinary planets, because TESS observes one portion (or sector) of the sky for only 27 days before pointing someplace else, making it impossible to observe three transits of a planet with TESS.

In 2020, Haghighipour and his team found a way around this limitation. In an article published in The Astronomical Journal, they described a novel technique that would enable them to detect circumbinary planets using TESS, as long as the planet transited both of its host stars within the 27-day observing window.

Now, that same team of astronomers has actually found the first such circumbinary planet in TESS data, demonstrating that their technique works. The target binary is known by its catalog designation, TIC 172900988, and was observed in a single sector by TESS, where its lightcurve showed signs of two transits, one across each star, separated by just five days—during the same conjunction.

“This planet’s orbit takes almost 200 days—with the traditional transit method, we would have needed to wait over a year to detect two additional transits. Our new technique reduced that time to just five days, showing that despite its short window of observation, TESS can be used to detect circumbinary planets. The new planet is the proof of the validity, applicability and success of our invented technique,” said Haghighipour, founder of the TESS Circumbinary Planet Working Group. “This discovery demonstrates that our new technique works and will be able to find many more planets.”

Searching for traces of dark matter with neutron spin clocks