The physics of a singing saw 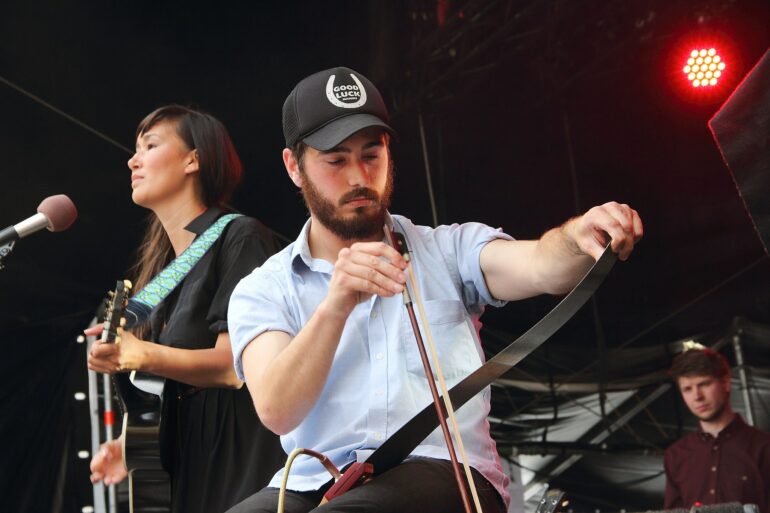 The eerie, ethereal sound of the singing saw has been a part of folk music traditions around the globe, from China to Appalachia, since the proliferation of cheap, flexible steel in the early 19th century. Made from bending a metal hand saw and bowing it like a cello, the instrument reached its heyday on the vaudeville stages of the early 20th century and has seen a resurgence thanks, in part, to social media.

As it turns out, the unique mathematical physics of the singing saw may hold the key to designing high quality resonators for a range of applications.

In a new paper, a team of researchers from the Harvard John A. Paulson School of Engineering and Applied Sciences (SEAS) and the Department of Physics used the singing saw to demonstrate how the geometry of a curved sheet, like curved metal, could be tuned to create high-quality, long-lasting oscillations for applications in sensing, nanoelectronics, photonics and more.

“Our research offers a robust principle to design high-quality resonators independent of scale and material, from macroscopic musical instruments to nanoscale devices, simply through a combination of geometry and topology,” said L Mahadevan, the Lola England de Valpine Professor of Applied Mathematics, of Organismic and Evolutionary Biology, and of Physics and senior author of the study.

The research is published in The Proceedings of the National Academy of Sciences (PNAS).

While all musical instruments are acoustic resonators of a kind, none work quite like the singing saw.

“How the singing saw sings is based on a surprising effect,” said Petur Bryde, a graduate student at SEAS and co-first author of the paper. “When you strike a flat elastic sheet, such as a sheet of metal, the entire structure vibrates. The energy is quickly lost through the boundary where it is held, resulting in a dull sound that dissipates quickly. The same result is observed if you curve it into a J-shape. But, if you bend the sheet into an S-shape, you can make it vibrate in a very small area, which produces a clear, long-lasting tone.”

The geometry of the curved saw creates what musicians call the sweet spot and what physicists call localized vibrational modes—a confined area on the sheet which resonates without losing energy at the edges.

Importantly, the specific geometry of the S-curve doesn’t matter. It could be an S with a big curve at the top and a small curve at the bottom or visa versa.

“Musicians and researchers have known about this robust effect of geometry for some time, but the underlying mechanisms have remained a mystery,” said Suraj Shankar, a Harvard Junior Fellow in Physics and SEAS and co-first author of the study. “We found a mathematical argument that explains how and why this robust effect exists with any shape within this class, so that the details of the shape are unimportant, and the only fact that matters is that there is a reversal of curvature along the saw.”

Shankar, Bryde and Mahadevan found that explanation via an analogy to very different class of physical systems—topological insulators. Most often associated with quantum physics, topological insulators are materials that conduct electricity in their surface or edge but not in the middle and no matter how you cut these materials, they will always conduct on their edges.

“In this work, we drew a mathematical analogy between the acoustics of bent sheets and these quantum and electronic systems,” said Shankar.

By using the mathematics of topological systems, the researchers found that the localized vibrational modes in the sweet spot of singing saw were governed by a topological parameter that can be computed and which relies on nothing more than the existence of two opposite curves in the material. The sweet spot then behaves like an internal “edge” in the saw.

“By using experiments, theoretical and numerical analysis, we showed that the S-curvature in a thin shell can localize topologically-protected modes at the ‘sweet spot’ or inflection line, similar to exotic edge states in topological insulators,” said Bryde. “This phenomenon is material independent, meaning it will appear in steel, glass or even graphene.”

The researchers also found that they could tune the localization of the mode by changing the shape of the S-curve, which is important in applications such as sensing, where you need a resonator that is tuned to very specific frequencies.

Next, the researchers aim to explore localized modes in doubly curved structures, such as bells and other shapes.