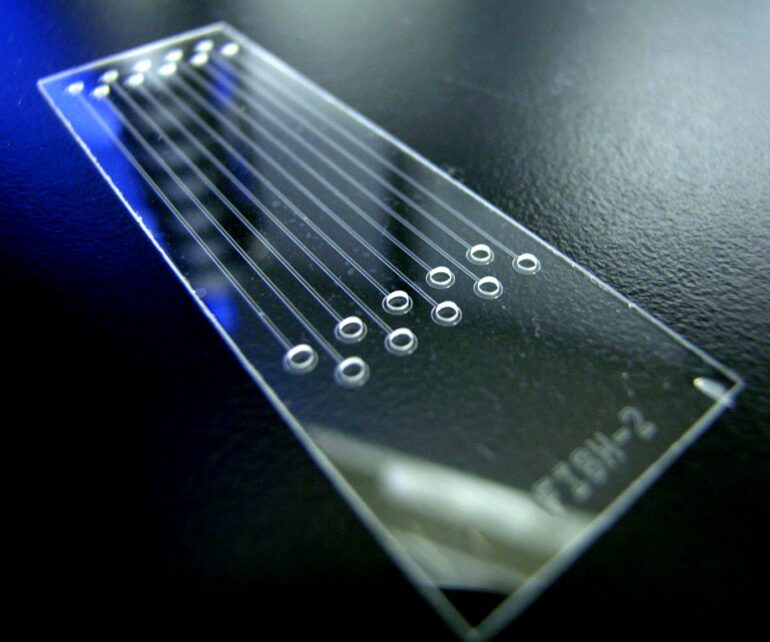 Scientists from the Institute of Laser Engineering at Osaka University created a prototype terahertz optical spectroscopy system with a sensing area equivalent to the cross-sectional area of just five human hairs. By measuring the shift in peak transmittance wavelength of a terahertz radiation source, the concentration of even trace dissolved contaminants in a tiny drop of water can be measured. This work may lead to portable sensors for applications such as the early detection of diseases, drug development, and water pollution monitoring.

Lab-on-a-chip technology is an exciting area of research. The ability to test patient samples at the bedside, or monitor water quality out in the field, with a portable monitoring device is very attractive. However, achieving strong sensitivity to the concentration of target analytes of interest can be difficult, especially when samples consist of very tiny volumes of liquid.

Now, a team of researchers at Osaka University has used a proprietary terahertz radiation source in a microfluidic chip containing a metamaterial structure to quantify the amount of trace contamination in water. “Using this lab-on-a chip system, we could detect minute changes in the concentration of trace amounts of ethanol, glucose, or minerals in water by measuring the shift in the resonance frequencies,” first author Kazunori Serita says.

The I-design consists of a metallic strip with a micrometer-sized gap sandwiched by other metallic strips. It is periodically arrayed in a row of five units, which formed a kind of “meta-atom,” in which peak optical transmittance varied based on the presence of trace contamination by dissolved molecules. This device is an application of the point terahertz source technology previously developed at Osaka University. A tiny source of terahertz light was generated by the irradiation spot of a femtosecond-pulse laser beam that induces a tightly confined electric-field mode at the gap regions. It then modifies the resonance frequency when a microchannel fabricated in the space between the metallic strips is filled with the sample solution.

“We succeeded in detecting just 472 attomoles of solutes in solutions with volumes of less than 100 picoliters, which is an order of magnitude better than existing microfluidic chips,” senior author Masayoshi Tonouchi says. This work can lead to significant improvements in portable sensing, both in terms of sensitivity and the amount of liquid required.

The study is published in the Journal of Physics: Photonics.