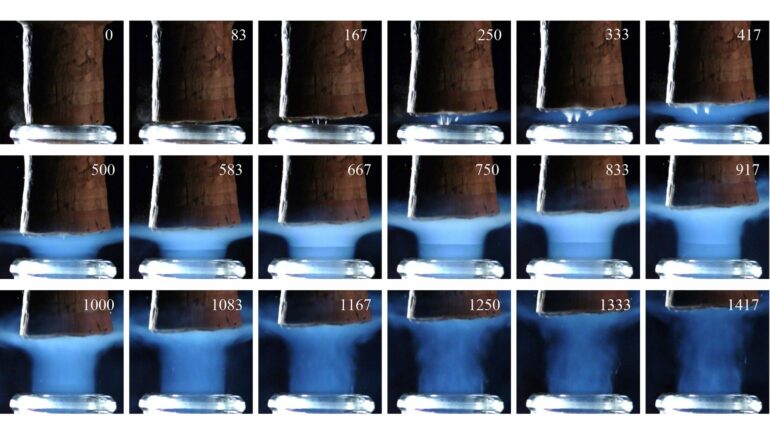 Opening a bottle of champagne traditionally marks the beginning of a festive celebration. Following the fun pop of the cork, a fizz of bubbles releases into the air, and finally, there is the pleasant tingle on the tongue.

But there is much more that comes out of the pop than meets the senses, according to researchers in France and India. In Physics of Fluids, computational fluid dynamics simulations revealed the formation, evolution, and dissipation of shock wave patterns as the carbon dioxide mixture shoots through the bottleneck in the first millisecond after cork popping.

The findings could provide insight into the complex and transient behavior of supersonic flow in applications ranging from rocket launchers, ballistic missiles, and wind turbines to electronics manufacturing and underwater vehicles. The simulations build on experimental research in 2019 that showed, for the first time, the formation of shock waves during cork popping.

“We wanted to better characterize the unexpected phenomenon of a supersonic flow that takes place during champagne bottle uncorking,” said co-author Robert Georges, from the Université de Rennes 1. “We hope our simulations will offer some interesting leads to researchers, and they might consider the typical bottle of champagne as a mini-laboratory.”

In the initial uncorking phase, the gas mixture is partially blocked by the cork, preventing the ejecting champagne from reaching the speed of sound. But as the cork further releases, the gas mixture escapes radially at supersonic speed, balancing its pressure through a succession of normal and oblique shock waves.

The waves combine to form shock diamonds, patterns of rings typically seen in rocket exhaust plumes. The bottle symmetry leads to a crown-shaped supersonic expansion. Eventually, the pressure becomes too low to maintain an appropriate nozzle pressure ratio for supersonic speed at the bottleneck and cork’s edge.

“Our paper unravels the unexpected and beautiful flow patterns that are hidden right under our nose each time a bottle of bubbly is uncorked,” said co-author Gérard Liger-Belair, from Université de Reims Champagne-Ardenne. “Who could have imagined the complex and aesthetic phenomena hidden behind such a common situation experienced by any one of us?”

The researchers plan to explore other parameters, such as temperature, volume, and bottleneck diameter, along with the physicochemical processes that accompany champagne bottle uncorking. For instance, they are interested in how supersonic flow is affected by ice particle formation caused by the drastic temperature drop as the fizz ejects from the bottle.

Sunlight could be used to power lasers