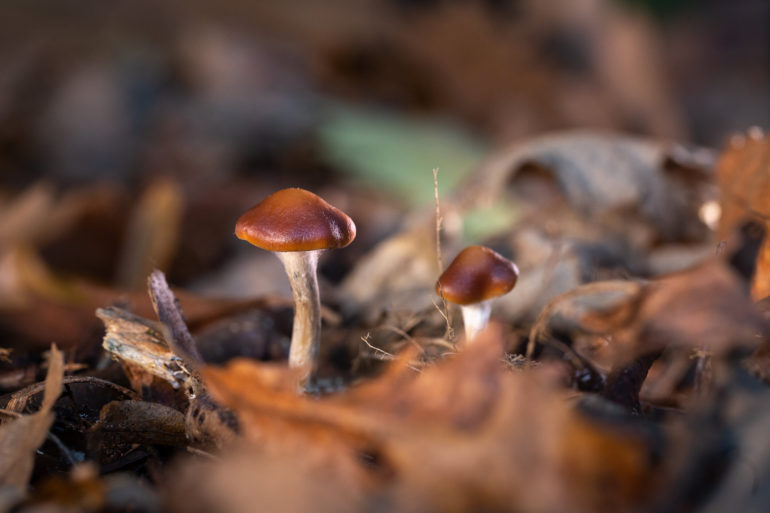 Psilocybin, the active compound in magic mushrooms, may be at least as effective as a leading antidepressant medication in a therapeutic setting.

This is the finding of a study carried out by researchers at the Centre for Psychedelic Research at Imperial College London.

In the most rigorous trial to date assessing the therapeutic potential of a ‘psychedelic’ compound, researchers compared two sessions of psilocybin therapy with a six-week course of a leading antidepressant (a selective serotonin uptake inhibitor called escitalopram) in 59 people with moderate-to-severe depression.

The results, published today in the New England Journal of Medicine, show that while depression scores were reduced in both groups, the reductions occurred more quickly in the psilocybin group and were greater in magnitude.

However, the researchers caution that the main comparison between psilocybin and the antidepressant was not statistically significant. They add that larger trials with more patients over a longer period are needed to show if psilocybin can perform as well as, or more effectively than an established antidepressant.

For the psilocybin dosing sessions, volunteers received an oral dose of the drug in a specialist clinical setting, while they listened to a curated music playlist and were guided through their experiences by a psychological support team, which included registered psychiatrists. All volunteers on the study received the same level of psychological support.

People treated with psilocybin—named ‘COMP360’ by its developers, COMPASS Pathways PLC—showed marked improvements across a range of subjective measures, including in their ability to feel pleasure, and express emotions, greater reductions in anxiety and suicidal ideation, and increased feelings of wellbeing.

Dr. Robin Carhart-Harris, head of the Centre for Psychedelic Research at Imperial, who designed and led the study, said: “These results comparing two doses of psilocybin therapy with 43 daily doses of one of the best performing SSRI antidepressants help contextualise psilocybin’s promise as a potential mental health treatment. Remission rates were twice as high in the psilocybin group than the escitalopram group.

“One of the most important aspects of this work is that people can clearly see the promise of properly delivered psilocybin therapy by viewing it compared with a more familiar, established treatment in the same study. Psilocybin performed very favourably in this head-to-head.”

All participants were assessed using standardised scales of depressive symptom severity. The main measure, the QIDS-SR-16, was used to gauge depressive symptoms on a continuous scale ranging from 0-27, where higher scores indicate greater depression. At the start of the trial, the mean score was 14.5 for the psilocybin group. But after six weeks, scores reduced by an average of 8.0 points.

Response, defined as a reduction in depression scores from baseline of at least 50%, was seen in 70% of people in the psilocybin group, compared with 48% in the escitalopram group. In addition, remission of symptoms—measured as a score of 0-5 at week six—was seen in 57% of the psilocybin group, compared with just 28% in the escitalopram group.

The team highlights that while the findings are generally positive, the absence of a straight placebo group and the small number of participants limits conclusions about the effect of either treatment alone. They add that the trial sample was comprised of largely white, majority male, and relatively well-educated individuals, which limits extrapolations to more diverse populations.

The psilocybin group reported fewer cases of dry mouth, anxiety, drowsiness and sexual dysfunction than the escitalopram group, and a similar rate of adverse events overall. Headaches experienced one day after dosing sessions were the most common side effect of psilocybin.

Dr. Rosalind Watts, clinical lead of the trial and formerly based at the Centre for Psychedelic Research, said: “Context is crucial for these studies and all volunteers received therapy during and after their psilocybin sessions. Our team of therapists were on hand to offer full support through sometimes difficult emotional experiences.”

Professor David Nutt, principal investigator on the study and the Edmond J Safra Chair in Neuropsychopharmacology at Imperial, said: “These findings provide further support for the growing evidence base that shows that in people with depression, psilocybin offers an alternative treatment to traditional antidepressants.

“In our study, psilocybin worked faster than escitalopram and was well tolerated, with a very different adverse effects profile. We look forward to further trials, which if positive should lead to psilocybin becoming a licensed medicine.”

The authors warn that while the initial findings are encouraging, patients with depression should not attempt to self-medicate with psilocybin, as the team provided a special clinical and therapeutic context for the drug experience and a regulated dose formulated in laboratory conditions. They stress that taking magic mushrooms or psilocybin in the absence of these careful safeguards might not have a positive outcome.

Dr. Carhart-Harris, added: “These latest finding build on our previous research testing psilocybin therapy for treatment resistant depression, and offer the most compelling evidence yet to support efforts towards licensing psilocybin therapy as a regulated mental health intervention. I’m deeply grateful for the philanthropic support that made this trial possible.”

“I strongly encourage both researchers and the public to delve deeply into our results, including those available as a published appendix to the main report.”