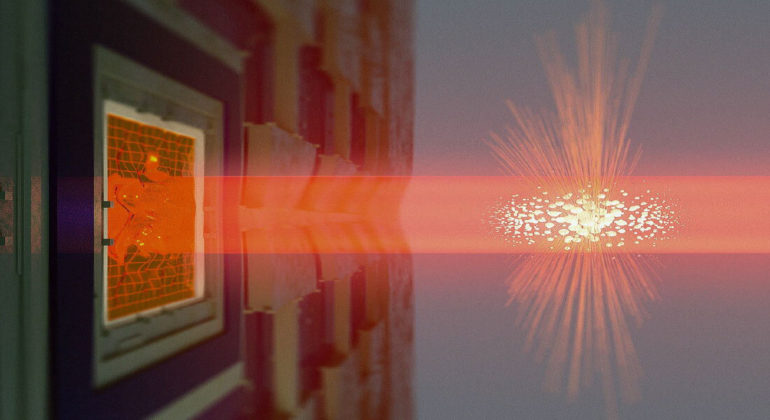 A team of researchers at the Niels Bohr Institute, University of Copenhagen, have succeeded in entangling two very different quantum objects. The result has several potential applications in ultra-precise sensing and quantum communication and is now published in Nature Physics.

Entanglement is the basis for quantum communication and quantum sensing. It can be understood as a quantum link between two objects which makes them behave as a single quantum object.

Researchers succeeded in making entanglement between a mechanical oscillator—a vibrating dielectric membrane—and a cloud of atoms, each acting as a tiny magnet, or what physicists call “spin.” These very different entities were possible to entangle by connecting them with photons, particles of light. Atoms can be useful in processing quantum information and the membrane—or mechanical quantum systems in general—can be useful for storage of quantum information.

Professor Eugene Polzik, who led the effort, states that: “With this new technique, we are on route to pushing the boundaries of the possibilities of entanglement. The bigger the objects, the further apart they are, the more disparate they are, the more interesting entanglement becomes from both fundamental and applied perspectives. With the new result, entanglement between very different objects has become possible.”

To understand entanglement, sticking to the example of spins entangled with a mechanical membrane, imagine the position of the vibrating membrane and the tilt of the total spin of all atoms, akin to a spinning top. If both objects move randomly, but if observed moving right or left at the same time, that is called a correlation. Such correlated motion is normally limited to the so-called zero-point motion—the residual, uncorrelated motion of all matter that occurs even at absolute zero temperature. This limits knowledge about any of the systems.

In their experiment, Eugene Polzik’s team entangled the systems, which means that they move in a correlated way with a precision better than the zero-point motion. “Quantum mechanics is like a double-edged sword—it gives us wonderful new technologies, but also limits precision of measurements which would seem just easy from a classical point of view,” says a team member, Michał Parniak. Entangled systems can remain perfectly correlated even if they are at a distance from each other—a feature that has puzzled researchers from the very birth of quantum mechanics more than 100 years ago.

Ph.D. student Christoffer Østfeldt explains further: “Imagine the different ways of realizing quantum states as a kind of zoo of different realities or situations with very different qualities and potentials. If, for example, we wish to build a device of some sort, in order to exploit the different qualities they all possess and in which they perform different functions and solve a different task, it will be necessary to invent a language they are all able to speak. The quantum states need to be able to communicate, for us to use the full potential of the device. That’s what this entanglement between two elements in the zoo has shown we are now capable of.”

A specific example of perspectives of entangling different quantum objects is quantum sensing. Different objects possess sensitivity to different external forces. For example, mechanical oscillators are used as accelerometers and force sensors, whereas atomic spins are used in magnetometers. When only one of the two different entangled objects is subject to external perturbation, entanglement allows it to be measured with a sensitivity not limited by the object’s zero-point fluctuations.

There is a fairly immediate possibility for application of the technique in sensing both for tiny oscillators and big ones. One of the biggest scientific pieces of news in recent years was the first detection of gravity waves, made by the Laser Interferometer Gravitational-wave Observatory (LIGO). LIGO senses and measures extremely faint waves caused by astronomical events in deep space, such as black hole mergers or neutron star mergers. The waves can be observed because they shake the mirrors of the interferometer. But even LIGO’s sensitivity is limited by quantum mechanics because the mirrors of the laser interferometer are also shaken by the zero-point fluctuations. Those fluctuations lead to noise preventing observation of the tiny motion of the mirrors caused by gravitational waves.

It is, in principle, possible to generate entanglement of the LIGO mirrors with an atomic cloud and thus cancel the zero-point noise of the mirrors in the same way as it does for the membrane noise in the present experiment. The perfect correlation between the mirrors and the atomic spins due to their entanglement can be used in such sensors to virtually erase uncertainty. It simply requires taking information from one system and applying the knowledge to the other. In such a way, one could learn both about the position and the momentum of LIGO’s mirrors at the same time, entering a so-called quantum-mechanics-free subspace and taking a step towards limitless precision of measurements of motion. A model experiment demonstrating this principle is on the way at Eugene Polzik’s laboratory.