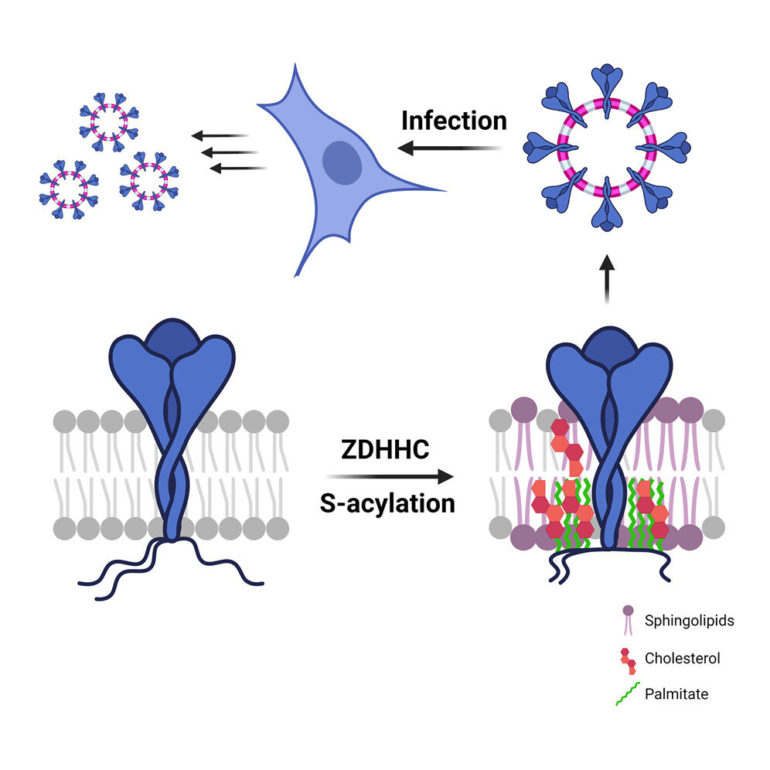 Like many viruses, SARS-CoV-2 relies on lipid modifications carried by host enzymes to organize their membrane structure and coordinate the function of virulence proteins. Scientists at EPFL have discovered the enzymes that transfer fatty acids to one of the main components of SARS-CoV-2, its fusion protein Spike. The findings reveal that such fatty acids are important for the production of infectious SARS-CoV-2 particles, and can help develop new drugs for treating coronaviruses and other viruses like herpes and influenza.

Developing new pharmaceutical strategies against viral infections, critically depends on our understanding of the structures and proliferation mechanisms of the pathogens involved. A team of researchers from EPFL’s School of Life Sciences has made a breakthrough study on SARS-CoV-2 that opens up the way for new anti-viral targets. The work is published in Developmental Cell.

“We have known for decades that membrane proteins of enveloped viruses undergo lipidation, and more specifically S-acylation—also known as palmitoylation,” says Professor Gisou van der Goot, who led the study. S-acylation, her lab’s expertise, is one of the many chemical modifications that proteins undergo in cells, helping them carry out their functions.

S-acylation is performed by a family of enzymes named zDHHC-acetyltransferases, who attach fatty acids to proteins at specific amino acid sites. These “lipid anchors” act as on/off switches that finetune proteins on multiple levels: function, association with membranes, distribution within cells and degradation.

Because it frequently involves the fatty acid palmitate, S-acylation is often referred to as palmitoylation, which plays essential roles in human biology, such as controlling cell growth and proliferation, propagating neurological signals, or engaging specific immune responses.

Among the first proteins identified as targets of palmitoylation, were the fusion proteins of viruses. These include Spike, which forms the “corona” of coronaviruses and the haemagglutinin (H) of flu viruses. Spike proteins establish the first contact between the virus and the cell that gets infected, and enable the virus to enter the cell through membrane fusion. Little is known about why and how such Spike proteins are palmitoylated.

“The Spike protein of SARS-CoV-2 is actually the most palmitoylated protein known to date,” says van der Goot. “It contains ten palmitoylation sites, and that within a sequence of just twenty amino acids. For comparison, mammalian membrane proteins generally have only two or three sites. As experts in S-acylation, we sought to understand why a protein would need so many sites, and how do they benefit the virus.”

The team quickly acquired the skills to work in high-containment laboratories with dangerous infectious pathogens, and collaborated with multiple labs from EPFL, combining computational, lipidomics, cell biology, and biochemical approaches.

The study revealed that, during infection, the enzyme ZDHHC20, was the main “culprit” for the modification of Spike, with palmitoylation occurring very rapidly, a step that was found to be crucial to protect Spike from degradation by the host cell.

The authors concluded that S-acylation of Spike is crucial for the formation of highly infectious viruses. Accordingly, the researchers could show that lipid-modifying drugs that interfere with the palmitoylation of Spike effectively prevented SARS-coV-2 from infecting cells.

The mysteries of the iPhone charging chimes

In CompaniesSmartphones
on 8 May 20212 min read

“Our study points towards S-acylating enzymes and lipid biosynthesis enzymes as novel therapeutic anti-viral targets,” says van der Goot. “These findings are likely relevant to other enveloped viruses, such as influenza and herpes.”

New coronavirus variant: What is the spike protein and why are mutations on it important?