Unleashing a flood of neutralizing antibodies against HIV 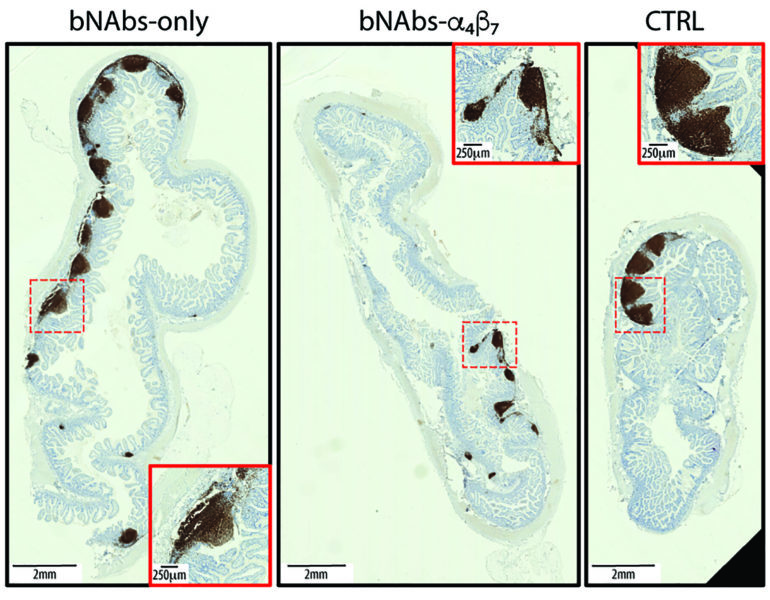 For more than 40 years a goal that too often has proved elusive is a pharmaceutical defeat of the human immunodeficiency virus—HIV. And the thrust in recent years has emphasized bringing newer, stealthier weapons to the fight.

While scientists keep inching closer to delivering a knockout punch to the virus, they’re still not close enough send HIV down for the count.

Groundbreaking vaccine technology—the mRNA immunizations—were developed in record time to harness a globe-circling pandemic. But an mRNA inoculation against HIV is just now being studied. Moderna Inc., the U.S. biotechnology company that produced an mRNA vaccine to address SARS-CoV-2, is in early phase studies of an mRNA vaccine to prevent infection with HIV.

But there are other approaches on the drawing board that some scientists say may deliver a knockout blow to a virus that has been at center of global pandemic since the early 1980s.

A collaborative group of medical scientists, led by a team in New York, has launched a series of animal studies that are approaching HIV infection by using a multifaceted army of antibodies. Some of the antibodies are neutralizing, administered to test animals as monoclonal antibodies. Another type of monoclonal antibody, engineered to have a different job, forms a blockade, preventing a critical factor in the HIV infection process from proceeding with its role of facilitating viral replication.

Dr. Ines Frank of the Population Council’s Center for Biomedical Research at Rockefeller University in New York City is the lead author of a study that examined the monoclonal antibody approach. The treatment that Frank and colleagues developed delays the rebound of an HIV-like virus in a large animal model. The researchers studied the antibodies’ impact on the simian cousins of the human immunodeficiency virus.

Using broadly neutralizing antibodies— bNAbs— along with another antibody class that targets certain cell receptors, the team discovered it’s possible to delay the rebound of the virus in infected animals for multiple weeks at a time. For some of the test animals, the one-two punch delivered by a combination of the antibodies knocks out the virus indefinitely, a finding that lays a foundation toward a cure.

Although more testing is required for clinical translation—bringing the research from the laboratory to the clinic—the new results are a giant step toward a monoclonal antibody method of controlling HIV.

Currently, the experimental antibody therapy is being tested only in rhesus macaques. And Frank and the New York City team are collaborating with scientists at Tulane University’s National Primate Research Center in Covington, Louisiana, as well as with another group of investigators at the Vaccine Research Center, a division of the National Institute of Allergy and Infectious Diseases in Bethesda, Maryland.

The multicenter group of scientists has shown that transferring broadly neutralizing antibodies to the animals can target the virus and lower viral counts while stimulating antiviral immunity. These results suggest that this type of antibody therapy could play an important role in any eventual curative therapy for HIV. However, the researchers strongly caution that more research is needed to improve the antibodies’ protective effects before they can be tested in human clinical trials.

“Anti-HIV broadly neutralizing antibodies— bNAbs—may favor development of antiviral immunity by engaging the immune system during immunotherapy,” Frank asserted in Science Translational Medicine, underscoring that the antibodies prompt the immune system to participate in controlling the virus. “These findings need to be recapitulated in larger studies with a focus on determining the mechanisms and the duration of virologic control before they can be translated into clinical settings.”

As Frank and her collaborators continue their research, the number of advances that have been translated into practical treatments for HIV patients in recent years has been extraordinarily impressive. Within the past decade, medical scientists have added an array of new tools to the armamentarium directed against the virus. Most recently, research has yielded pre- and post-exposure prevention, but these tools join multiple drug combinations and single-pill therapies.

Currently, most people who test positive for the virus rely on antiretroviral therapy, which can reduce viral loads to undetectable levels in the blood, a feat that some medical investigators refer to as a functional cure.

Antiretroviral therapy works by controlling the replication of HIV, and when replication is controlled, the viral load in the blood dramatically diminishes. But HIV can hide in the body, persisting in a stubborn latent state that’s impervious to treatment. The virus also can rebound prolifically when patients stop taking their medications.

Frank and colleagues, meanwhile, are working toward monoclonal antibody treatments that could have a more long-lasting effect, keeping the virus at bay without the need for a daily dose of medication. Achieving that goal will require long hours in the laboratory.

So far, the team has studied broadly neutralizing antibodies— bNAbs— either alone or in combination with an antibody that targets a tiny protein called integrin α4β7. As a family, integrins regulate cell growth and proliferation; they’re also involved in cell migration, signaling and cytokine activation. Other studies have shown that integrin α4β7 and its natural ligand, MAdCAM-1, direct infected CD4+ T cells into the gut mucosa. This action, scientists say, may aid HIV-1’s ability to seed new viruses by replicating in the mucosa during the early stages of infection.

The task confronting Frank and collaborators in Louisiana and Maryland has been finding a way to block α4β7. By doing so with a monoclonal antibody they have been able to stop the replication of a virus known to vigorously multiply in an ongoing assault against a host incapable of mounting a robust defense.

“Targeting integrin α4β7 with an anti-α4β7 monoclonal antibody—Rh-α4β7—affects immune responses in SIV/SHIV-infected macaques,” Frank and the team of investigators wrote in the journal. “To explore the therapeutic potential of combining bNAbs with an α4β7 integrin blockade, SHIV-infected, viremic rhesus macaques were treated with bNAbs only, or a combination of bNAbs and Rh-α4β7 or were left untreated as a control.”

Frank and colleagues found that the lab animals receiving broadly neutralizing antibodies alone showed a sharp decline in viral counts, but the infection quickly rebounded after a median of 3 weeks. But animals that received both broadly neutralizing antibodies and the anti-α4β7 antibody didn’t show viral rebound until 6 weeks, and half of that group of macaques hadn’t rebounded by the study’s conclusion at 21 weeks.

“Our study suggests that α4β7 integrin blockade may prolong virologic control by bNAbs in SHIV-infected macaques,” Frank concluded, noting that additional studies will determine the next chapters in the quest to exert more control over HIV.

Citation:
A page from the COVID therapy playbook: Unleashing a flood of neutralizing antibodies against HIV (2021, October 25)
retrieved 25 October 2021
from https://medicalxpress.com/news/2021-10-page-covid-therapy-playbook-unleashing.html