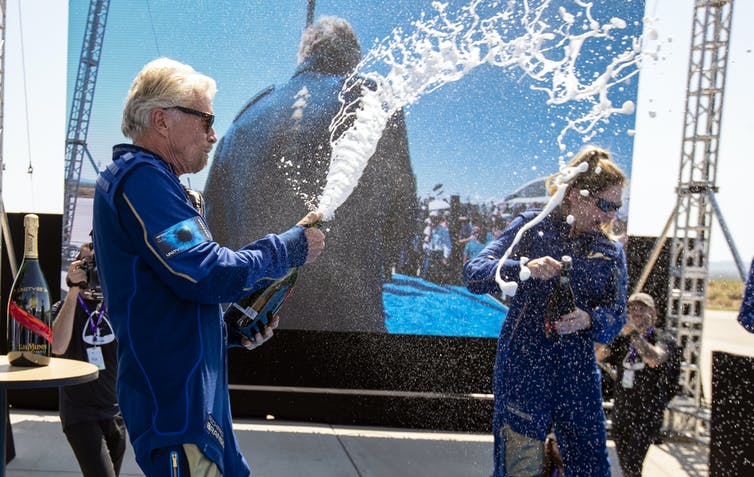 With Jeff Bezos and Richard Branson both flying to space in craft made by their own private companies, July 2021 was perhaps the highest-profile month for space in years. But these events have been met with a mix of opinion.

I am an associate professor of public relations and study how opinions on topics like politics, entertainment and even space launches vary between different groups of people. I worked with colleagues at The Harris Poll to find out what U.S. residents think of these launches and the broader topic of private spaceflight.

The poll found that most U.S. residents are interested in and have a positive attitude toward the private space industry. One outlier was younger people, who are less hopeful about the benefits of galactic journeys. Overall though – and rather interestingly – these positive feelings are widely held across political and demographic lines. It’s rare to see such agreement on any issue these days, so the results suggest space may be a unifying topic in future years.

Good for everyone but best for the rich

A total of 2,011 U.S. residents responded to the survey questions between July 23 and July 25, 2021, just a couple weeks after Branson and Bezos went to space. The survey asked people to agree or disagree with a number of statements about the potential value of these launches, the motivation behind the launches and who will have access to space. In response to every question, people were supportive of space travel and the technological developments that come from it. Yet, respondents also viewed these events as ego trips generally limited to rich people.

To understand whether people think these endeavors are important, one statement was: “Space travel and research are important for the future development of humanity.” Seventy-four percent of respondents agreed, with similar results across all political parties. Similarly, over two–thirds of people agreed with the idea “The recent space launches by Blue Origin and Virgin Galactic are important for the future development of space travel and technology.”

Finally, about 3 in 4 felt “Money spent on space could better be spent addressing today’s issues on Earth,” though partisan divides were a bit higher here.

According to Rob Jekielek, managing director at The Harris Poll, “Space travel has captured our imagination about the future of humanity,” but people are concerned about “taking resources away from addressing today’s pressing challenges.” This feeling was mirrored across most demographics and political parties – a rare thing in an age when partisanship on most issues is quite high.

While the survey found a lot of agreement across partisan lines, there were higher levels of disagreement between age groups – young people in particular stood out.

Respondents 18 to 24 years old were less supportive when it came to believing that spending money on space – or on Earth – would have as much of a positive effect.

Another demographic difference of note was between those willing to get a COVID-19 vaccine versus those who were not. Of people interested in vaccines, 79% think space travel is important versus 60% of those opposed to vaccines. While both groups still agree that space travel is important, the gap was one of the largest in the sample. I believe this could reflect differing views on science in general.

Despite the mix of headlines and tweets alternatively bashing or praising Bezos, Branson and Elon Musk, this survey shows that, for now, U.S. residents are generally in agreement that space is still an exciting frontier. The future of space includes satellite internet, missions to Mars and space tourism, but it also involves high costs, the problems of space junk and climate concerns.

It will be interesting to see if this broad support continues or if partisanship and the less optimistic views of the younger generations take hold.