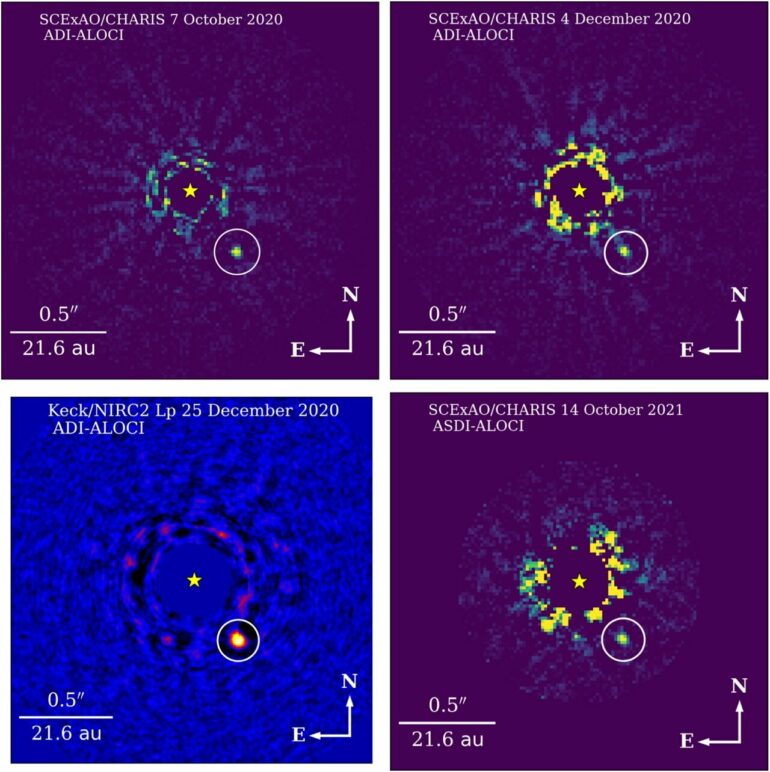 Located just 150 light-years away, Hyades is the closest star cluster to Earth in the constellation Taurus; its V-shaped pattern can be seen with the unaided eye. Because this group of young stars were born at almost the same time, the Hyades Cluster has attracted astronomers’ attention as an important research target for studying the evolution of stars and planets.

The newly found brown dwarf in this cluster, called HIP 21152 B, is the first confirmed substellar companion of a main sequence star in Hyades discovered via direct imaging. Its mass is similar to a giant planet—between 22–36 Jupiter masses.

“This result can provide an important clue to understand the atmospheres of giant planets and brown dwarfs based on how and when they show atmospheric characteristics similar to those seen in the planets of the HR 8799 system and HIP 21152 B,” said Masayuki Kuzuhara, a project assistant professor at the Astrobiology Center and lead author of the study. “It is expected that HIP 21152 B will play an important role as a benchmark for future progress in astronomy and planetary science.”

The study, led by the Astrobiology Center of the National Institutes of Natural Sciences (NINS) and National Astronomical Observatory of Japan (NAOJ), is published in The Astrophysical Journal Letters.

Brown dwarfs have masses that fall in between a planet and a star; they’re more massive than planets but not as massive as stars. These substellar objects are useful for studying the evolution and atmospheres of giant planets because Jupiter-like planets and lighter brown dwarfs are expected to have similar characteristics.

Brown dwarfs drift alone in space or orbit around stars. While thousands of brown dwarfs have been found since the first discovery in 1995, companion-type brown dwarfs are rare, with a frequency of only a few per 100 stars. For this reason, astronomers have tried to establish an efficient way to find companion brown dwarfs.

The researchers also obtained spectra of the brown dwarf showing HIP 21152 B’s atmosphere is transitioning between a “Type L” to a “Type T” brown dwarf, which means it is getting cooler, with a temperature of 1200–1300K.

Interestingly, the brown dwarf has a similar spectrum to the famed HR 8799 system, which is the first exoplanetary system to have its photo taken using two Maunakea Observatories—Keck Observatory and Gemini Observatory.