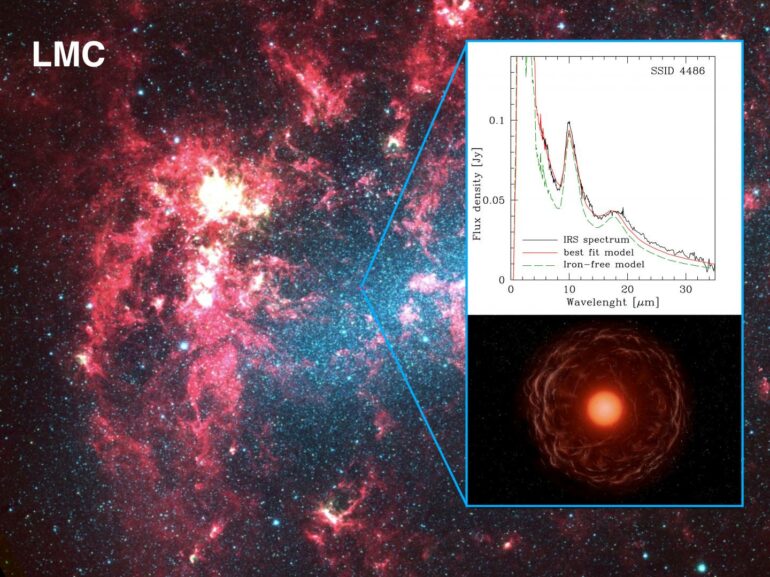 A thorough understanding of galaxy evolution depends in part on an accurate measurement of the abundance of metals in the intergalactic medium—the space between stars—but dust can impede observations in optical wavelengths. An international team of astronomers at the University of California, Irvine, Oxford University in England, and other institutions uncovered evidence of heavier elements in local galaxies—found to be deficient in earlier studies—by analyzing infrared data gathered during a multiyear campaign.

For a paper published recently in Nature Astronomy, the researchers examined five galaxies that are dim in visible wavelengths but trillions of times more luminous than the sun in the infrared. Interactions between these galaxies and neighboring star systems cause gas to shift around and collapse, setting up conditions for prodigious star formation.

“Studying the gas content of these galaxies with optical instruments, astronomers were convinced that they were significantly metal-poor when compared with other galaxies of similar mass,” said lead author Nima Chartab, UCI postdoctoral scholar in physics & astronomy. “But when we observed emission lines of these dusty galaxies in infrared wavelengths, we were afforded a clear view of them and found no significant metal deficiency.”

To determine the abundance of gas-phase metals in the intergalactic medium, the astronomers sought to acquire data on the ratios of proxies, oxygen and nitrogen, because infrared emissions from these elements are less obscured by galactic dust.

“We are looking for evidence of baryon cycling in which stars process elements like hydrogen and helium to produce carbon, nitrogen and oxygen,” said co-author Asantha Cooray, UCI professor of physics & astronomy. “The stars eventually go supernovae and blow up and then all of that gas in the outskirts of the stars gets turned into clouds that get thrown around. The material in them is loose and diffuse but eventually through gravitational perturbations caused by other stars moving around, the gas will start to clump and collapse, leading to the formation of new stars.”

Observing this process in infrared wavelengths is a challenge for astronomers because water vapor in Earth’s atmosphere blocks radiation on this part of the electromagnetic spectrum, making measurements from even the highest-altitude ground telescopes—like those at the Keck Observatory in Hawaii—insufficient.

Part of the dataset used by the team came from the now-retired Herschel Space Telescope, but Herschel was not equipped with a spectrometer capable of reading a specific emission line that the UCI-led team needed for its study. The researchers’ solution was to take to the skies—reaching more than 45,000 feet above sea level—in the Stratospheric Observatory for Infrared Astronomy, NASA’s Boeing 747 equipped with a 2.5-meter telescope.

“It took us nearly three years to collect all the data in using NASA’s SOFIA observatory, because these flights don’t last all night; they’re more in the range of 45 minutes of observing time, so the study took a lot of flight planning and coordination,” said Cooray.

By analyzing infrared emissions, the researchers were able to compare the metallicity of their target ultraluminous infrared galaxies with less dusty galaxies with similar mass and star formation rates. Chartab explained that these new data show that ultraluminous infrared galaxies are in line with the fundamental metallicity relation determined by stellar mass, metal abundance and star formation rate.

The new data further show that the underabundance of metals derived from optical emission lines is likely due to “heavy dust obscuration associated with starburst,” according to the paper.

“This study is one example where it was critical for us to use this infrared wavelength to get a full understanding of what’s going on in some of these galaxies,” said Cooray. “When the optical observations initially came out suggesting that these galaxies had low metals, theorists went and wrote papers, there were a lot of simulations trying to explain what was going on. People thought, ‘Maybe they really are low-metal galaxies,’ but we found that not to be the case. Having a full view of the universe across the whole electromagnetic spectrum is really crucial, I think.”