Cosmic ‘spider’ found to be source of powerful gamma-rays 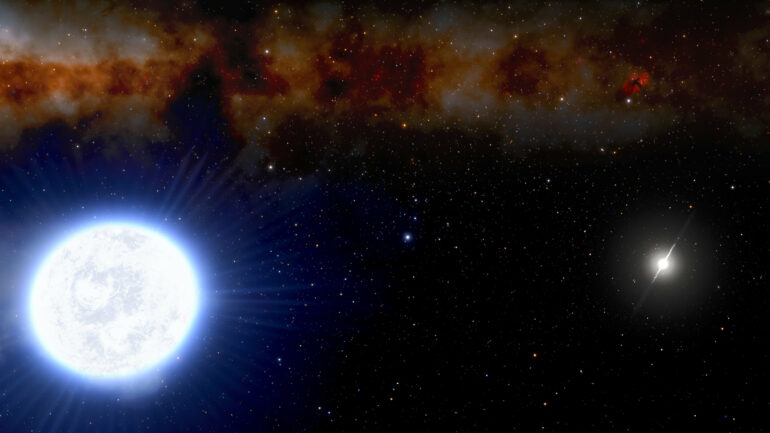 Using the 4.1-meter SOAR Telescope in Chile, astronomers have discovered the first example of a binary system where a star in the process of becoming a white dwarf is orbiting a neutron star that has just finished turning into a rapidly spinning pulsar. The pair, originally detected by the Fermi Gamma-ray Space Telescope, is a “missing link” in the evolution of such binary systems.

A bright, mysterious source of gamma rays has been found to be a rapidly spinning neutron star—dubbed a millisecond pulsar—that is orbiting a star in the process of evolving into an extremely-low-mass white dwarf. These types of binary systems are referred to by astronomers as “spiders” because the pulsar tends to “eat” the outer parts of the companion star as it turns into a white dwarf.

The duo was detected by astronomers using the 4.1-meter SOAR Telescope on Cerro Pachón in Chile, part of Cerro Tololo Inter-American Observatory (CTIO), a Program of NSF’s NOIRLab.

NASA’s Fermi Gamma-ray Space Telescope has been cataloging objects in the universe that produce copious gamma rays since its launch in 2008, but not all of the sources of gamma rays that it detects have been classified. One such source, called 4FGL J1120.0-2204 by astronomers, was the second brightest gamma-ray source in the entire sky that had gone unidentified, until now.

Astronomers from the United States and Canada, led by Samuel Swihart of the US Naval Research Laboratory in Washington, D.C., used the Goodman Spectrograph on the SOAR Telescope to determine the true identity of 4FGL J1120.0-2204. The gamma-ray source, which also emits X-rays, as observed by NASA’s Swift and ESA’s XMM-Newton space telescopes, has been shown to be a binary system consisting of a “millisecond pulsar” that spins hundreds of times per second, and the precursor to an extremely-low-mass white dwarf. The pair are located over 2600 light-years away.

“Michigan State University’s dedicated time on the SOAR Telescope, its location in the southern hemisphere and the precision and stability of the Goodman spectrograph were all important aspects of this discovery,” says Swihart.

“This is a great example of how mid-sized telescopes in general, and SOAR in particular, can be used to help characterize unusual discoveries made with other ground and space-based facilities,” notes Chris Davis, NOIRLab Program Director at US National Science Foundation. “We anticipate that SOAR will play a crucial role in the follow-up of many other time-variable and multi-messenger sources over the coming decade.”

The optical spectrum of the binary system measured by the Goodman spectrograph showed that light from the proto-white dwarf companion is Doppler shifted—alternately shifted to the red and the blue—indicating that it orbits a compact, massive neutron star every 15 hours.

“The spectra also allowed us to constrain the approximate temperature and surface gravity of the companion star,” says Swihart, whose team was able to take these properties and apply them to models describing how binary star systems evolve. This allowed them to determine that the companion is the precursor to an extremely-low-mass white dwarf, with a surface temperature of 8200 °C (15,000 °F), and a mass of just 17% that of the sun.

When a star with a mass similar to that of the sun or less reaches the end of its life, it will run out of the hydrogen used to fuel the nuclear fusion processes in its core. For a time, helium takes over and powers the star, causing it to contract and heat up, and prompting its expansion and evolution into a red giant that is hundreds of millions of kilometers in size. Eventually, the outer layers of this swollen star can be accreted onto a binary companion and nuclear fusion halts, leaving behind a white dwarf about the size of Earth and sizzling at temperatures exceeding 100,000 °C (180,000 °F).

The proto-white dwarf in the 4FGL J1120.0-2204 system hasn’t finished evolving yet. “Currently it’s bloated, and is about five times larger in radius than normal white dwarfs with similar masses,” says Swihart. “It will continue cooling and contracting, and in about two billion years, it will look identical to many of the extremely low mass white dwarfs that we already know about.”

Millisecond pulsars twirl hundreds of times every second. They are spun up by accreting matter from a companion, in this case from the star that became the white dwarf. Most millisecond pulsars emit gamma rays and X-rays, often when the pulsar wind, which is a stream of charged particles emanating from the rotating neutron star, collides with material emitted from a companion star.

The magnetic field in the Milky Way filamentary bone G47

“Follow-up spectroscopy with the SOAR Telescope, targeting unassociated Fermi gamma-ray sources, allowed us to see that the companion was orbiting something,” says Swihart. “Without those observations, we couldn’t have found this exciting system.”

This research was presented in a paper “4FGL J1120.0–2204: A Unique Gamma-ray Bright Neutron Star Binary with an Extremely Low Mass Proto-White Dwarf,” to appear in The Astrophysical Journal.

Provided by
Association of Universities for Research in Astronomy (AURA)