Racial, ethnic minorities and low-income groups in US exposed to higher levels of air pollution 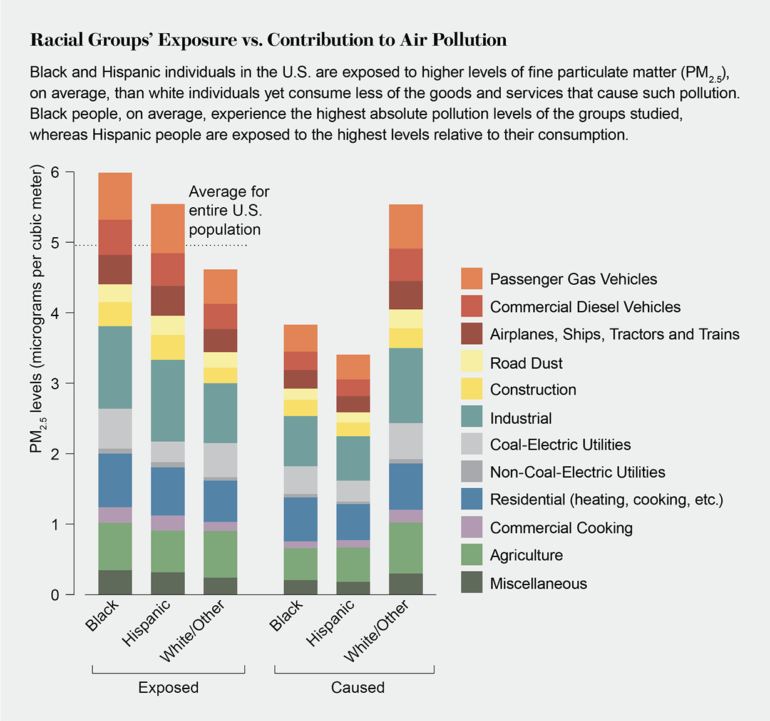 Certain groups in the U.S.—Blacks, Asians, Hispanics, Latinos, and low-income populations—are being exposed to higher levels of dangerous fine particulate air pollution (PM2.5) than other groups, according to new research from Harvard T.H. Chan School of Public Health.

In collaboration with the Environmental Systems Research Institute, the study authors developed a new platform linking 17 years’ worth of demographic data with data on fine particulate pollution from across the U.S., and created unique visualizations, that shine a light on the stark disparities in air pollution exposure among racial/ethnic and income groups in America.

The study will be published on January 12, 2022, in the journal Nature.

“Our study, which highlights the relative disparities in PM2.5 exposure in the U.S., is particularly timely given current crises the country is facing, such as a reckoning with racism as well as disparities in COVID-19 outcomes,” said Francesca Dominici, Clarence James Gamble Professor of Biostatistics, Population and Data Science at the Harvard Chan School and senior author of the study.

The new study took a deeper dive into the issue of exposure by focusing on relative disparities across income groups and racial/ethnic groups. The researchers linked demographic data from the U.S. Census Bureau and American Community Survey for the years 2000 through 2016 with U.S.-wide PM2.5 data estimated from machine learning models based on satellite observations and atmospheric chemistry models. The data was analyzed for the nation’s 32,000 zip code tabulation areas (ZCTA).

But the findings showed that, despite reductions in PM2.5 levels over the years, disparities in exposure have persisted.

The researchers also found that, from 2004 to 2016, areas of the U.S. with lower income groups have been exposed to higher average PM2.5 levels than areas with higher income groups. In addition, relative disparities in exposure to PM2.5 in relation to safety standards set by the U.S. Environmental Protection Agency and the World Health Organization have been increasing over time among racial/ethnic groups, according to the study.

“Our findings regarding relative disparities indicate the importance of strong, targeted air-pollution-reduction strategies, not only to reduce overall air-pollution levels but also to move closer toward the EPA’s aim to provide all people with the same degree of protection from environmental hazards,” said Abdulrahman Jbaily, a former postdoctoral researcher at Harvard Chan School and first author of the study.