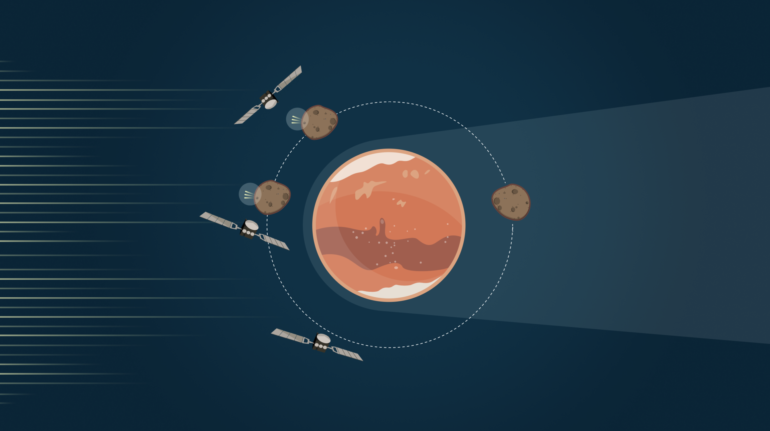 By performing a series of real and ‘fake’ flybys, ESA’s Mars Express has revealed how Mars’ largest moon, Phobos, interacts with the solar wind of charged particles thrown out by the Sun—and spotted an elusive process that has only been seen at Phobos once before.

The solar wind streams out from our star, filling the Solar System with energetic particles. Earth’s Moon reflects these particles continuously, and the same ‘backscattering’ is expected at Mars’ moon Phobos given the similarities between the two (both are rocky, lack a magnetic field and atmosphere, and orbit terrestrial planets in the inner Solar System). However, ESA’s Mars Express has only seen this backscattering once (in 2008), despite coming close to Phobos many times.

Researchers now report the second successful detection of reflected solar wind particles at Phobos, spotted during a flyby of the moon in January 2016.

“Phobos’ relationship with the solar wind has long been an enigma,” says Yoshifumi Futaana of the Swedish Institute of Space Physics (IRF), and lead author of the new paper on the 2016 flyby. “We know that Phobos must be interacting with these particles, but we’re not seeing them—why? Why is Phobos behaving so differently to the Moon when the two appear to be quite similar?

“For the first time in eight years of flybys, we’re excited to again see signs of these reflected particles at Mars’ largest moon.”

However, as this backscattering is so intermittent and seldom seen at Phobos, scientists wondered if the phenomenon could have been caused by Mars Express itself reflecting solar wind particles. During the 2008 flyby, the spacecraft moved its solar array and shifted to point its instruments at Phobos—a maneuver that may have affected the behavior of surrounding particles.

“The same criticism remained for the 2016 flyby: how do we know this detection is actually reflection from Phobos, and not from Mars Express itself?” adds Yoshifumi.

To explore this possibility, the researchers performed three unprecedented special operations, dubbed ‘fake’ flybys, with the spacecraft in 2017. Using the exact same operation sequence, control maneuvers and solar array adjustments, Mars Express flew in a patch of space filled with solar wind but without the presence of Phobos, essentially performing a flyby—only without its target.

“In essence, we were completing a kind of laboratory experiment at Mars,” says co-author Mats Holmström, also of IRF and Principal Investigator for Mars Express’ ASPERA-3 instrument, which observed the reflected particles. “The ‘fake’ flybys let us explore how Mars Express influences the solar wind in a more controlled environment, so we could search for signs of the spacecraft itself being the cause of the particle reflection.”

The ‘fake’ flybys revealed no such signs that Mars Express produced or scattered any incoming particles, suggesting that Phobos did indeed reflect the detected particles back into space during the 2008 and 2016 flybys.

Despite this, backscattered particles have only been spotted in two of over a dozen Phobos flybys, and even then, signals are sporadic and intermittent. This is entirely different to what we see at the Moon, another body that lacks both an atmosphere and magnetic field, and so would be expected to behave similarly. Why this difference?

Yoshifumi and colleagues consider a number of possibilities, from processes perhaps taking place on different spatial or temporal scales than those captured by Mars Express, to possible magnetism on Phobos, to differences in the surface compositions of Phobos and the Moon—and more.

“Overall, the intermittent particles are likely being reflected from the Phobos’ surface, but we can’t rule out another mysterious origin,” adds Yoshifumi. “However, the ‘fake’ flybys helped us understand the situation significantly better, explicitly showing that Mars Express was not the source.

“To know more, we need more Mars Express flybys of Phobos in various configurations. Even if no reflected particles are seen during those flybys, even a lack of signal will provide valuable statistics.”

The solar wind behaving differently at Phobos and the Moon implies that the surfaces of each have evolved differently, raising intriguing questions about how the Mars system differs from our own.

As one of only three moons in the inner Solar System, Phobos is of great interest for space exploration—past, present and future.

From the Soviet Phobos program of the 1980s through to future missions such as the Japanese Space Agency (JAXA)’s Martian Moons eXploration (MMX) mission planned for launch in the mid-2020s, there have been many dedicated efforts to explore the origin, environment, behavior and evolution of Mars’ largest moon.

ESA is partnering with JAXA on the MMX mission, providing communications equipment, support in spacecraft tracking and control, and opportunities for scientists to join the mission’s science team. MMX will characterize both martian moons, Phobos and Deimos, deploy a rover to Phobos’ surface, and return a sample of Phobos to Earth for analysis. A key aim of MMX is to determine if the moons are asteroids captured by Mars’ gravity, or debris remaining in orbit after a giant impact on Mars.

Beyond our knowledge of Phobos—and other rocky or icy bodies exhibiting similar physics that ESA plans to explore, from Mercury to asteroids to the Galilean moons of Jupiter—understanding how charged particles behave in space is critical to space exploration.

For example, astronauts on the Moon are exposed to the solar wind, a key consideration for ESA’s forthcoming plans for human expeditions to space. Surface interactions on planets and moons are also a core component of surface chemistry, possibly including how bodies form and store water.

“The study also shows the value of our operations colleagues and data archives in enabling new discovery and knowledge and making important work such as this possible. We must understand the space environment to explore it with either satellite or astronaut, and so revealing the dynamics at play in the martian system is an important step forward.”