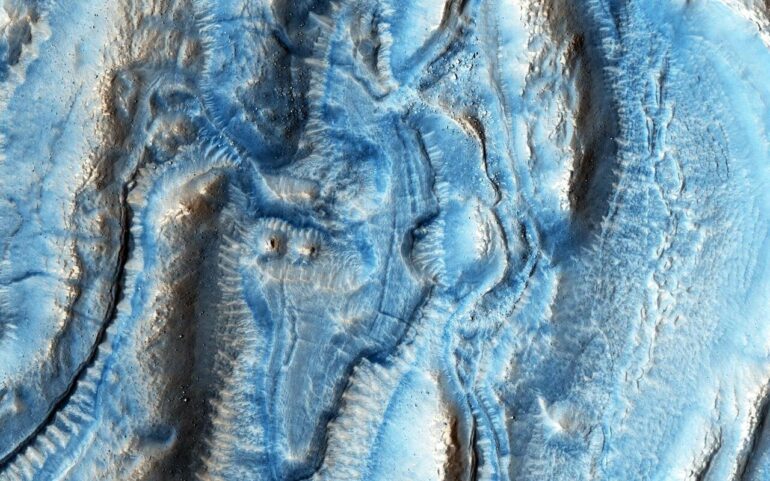 The weight and grinding movement of glaciers has carved distinctive valleys and fjords into Earth’s surface. Because Mars lacks similar landscapes, researchers believed ancient ice masses on the Red Planet must have been frozen firmly to the ground. New research suggests they were not stuck in place, but just moved very slowly.

Motion is part of the definition of a glacier. On Earth, meltwater gathers below glaciers and ice sheets, lubricating the downhill slide of these rivers of ice. The new study modeled how Mars’ low gravity would affect the feedback between how fast an ice sheet slides and how water drains below the ice, finding under-ice channels would be likely to form and persist. Fast water drainage would increase friction at the interface of rock and ice.

This means ice sheets on Mars likely moved, and eroded the ground under them, at exceedingly slow rates, even when water accumulated under the ice, the authors said. The new study was published in Geophysical Research Letters.

Although Mars does not have the obvious U-shaped valleys that mark Earth’s glacial landscapes, Grau Galofre said, researchers have found other geologic traces suggesting glacier-like ice masses in Mars’ past, including gravel ridges called eskers and potential subglacial channels.

“Whereas on Earth you would get drumlins, lineations, scouring marks and moraines, on Mars you would tend to get channels and esker ridges under an ice sheet of exactly the same characteristics,” Grau Galofre said.

Grau Galofre and her co-authors modeled the dynamics of two equivalent ice sheets on Earth and Mars with the same thickness, temperature and subglacial water availability. They adapted the existing physical framework that describes the drainage of water accumulated under Earth’s ice sheets, coupled with ice motion dynamics, to model Martian conditions and learn whether the subglacial drainage would evolve toward efficient or inefficient drainage configurations, and what effect this configuration would have on glacial sliding velocity and erosion.

“Going from an early Mars with presence of surface liquid water, extensive ice sheets and volcanism into the global cryosphere that Mars currently is, the interaction between ice masses and basal water must have occurred at some point,” Grau Galofre said. “It is just very hard to believe that throughout 4 billion years of planetary history, Mars never developed the conditions to grow ice sheets with presence of subglacial water, since it is a planet with extensive water inventory, large topographic variations, presence of both liquid and frozen water, volcanism, [and is] situated further from the Sun than Earth.”

The findings of this modeling effort demonstrate how glacial ice masses would drain their basal meltwater much more efficiently on Mars than Earth, largely preventing any lubrication of the base of ice sheets that would lead to fast sliding rates and enhanced glacial erosion. Indeed, typical lineated landforms found on Earth would not have time to develop on Mars, according to this study.

The work also has implications for the survival of possible ancient life forms on Mars, according to the authors. An ice sheet could provide a steady supply of water, protection and stability to any subglacial water bodies like lakes, shelter from solar radiation in the absence of a magnetic field, and insulation against extreme temperature variations.