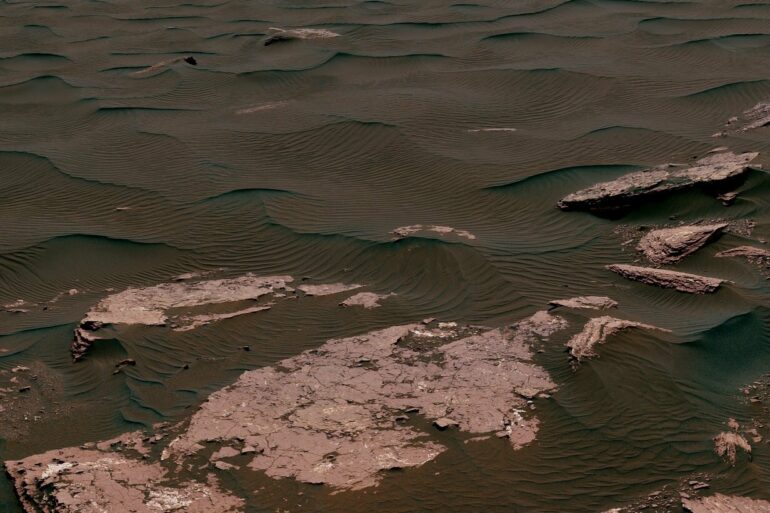 Among the mountainous dunes and small, undulating ripples of Mars’ desert-like surface are sand structures, intermediate in size, that are not quite like anything on Earth.

Stanford University scientists have now used an AI model to analyze a million Martian dunes and uncover how these sandy waves form on our sister planet at a scale—roughly 1 meter between crests—that previously seemed incompatible with the physics of how ripples and dunes arise on Earth.

The results, published Nov. 22 in Nature Communications, suggest scholars going forward can use fossilized versions of these structures to reconstruct the atmospheric history of Mars. That’s because there is a precise and consistent mathematical relationship between atmospheric density and the size of windblown ripples and dunes at all but the smallest scales.

“This is particularly important because it is thought that Mars used to have a thicker atmosphere in the past, perhaps sustaining Earth-like surface conditions,” said senior study author Mathieu Lapôtre, an assistant professor of geological sciences in the Stanford Doerr School of Sustainability. “However, it lost most of it, and we don’t really know when, how fast, and why.”

A product of air flow, or tiny torpedoes?

On Earth and Mars alike, windblown sand grains pile up into mounds of different shapes and sizes, ranging from dunes that extend for miles to tiny ridges barely high enough to hide a hermit crab. On Earth, the crests of these smaller ripples are typically spaced a few inches apart. They’re common in deserts, on beaches, and in sandstones, preserved like fingerprints of ancient winds. Scientists call them “impact ripples” because they result from windblown grains splashing into sand mounds like tiny torpedoes.

In 2015, NASA’s Curiosity rover returned images of similar patterns on the surface of Mars. In addition to giant dunes, the images showed smaller waves at two distinct scales: Some were close to the size of impact ripples familiar in similarly sized grains on Earth; others were about 10 times bigger—yet still smaller than dunes, which are shaped more by airflow than sand impacts.

How these two distinct ripple scales came to coexist and coevolve on Mars has been puzzling scientists ever since. Under one proposed explanation, the middle-sized structures result from the continuous growth of impact ripples, enabled by very low air pressure on Mars. Contrary to the idea of a continuum, however, scientists had observed an inexplicable absence of ripples with crests spaced between 8 and 30 inches apart.

Lapôtre and other scientists have suggested that the shapes could result from a hydrodynamic instability already known to produce windblown dunes in deserts and similar undulating mounds in sandy riverbeds on Earth.

Researchers have also speculated that the size of larger Martian ripples and dunes, and ripples that form underwater on our own planet, could all be controlled by the same shift, or anomaly, in the flow of air or water. This shift, which arises only after mounds grow past a certain size, would result from interplay among global atmospheric properties like density and local factors like topography and wind shear velocity.

But until now, scientists had only hypothesized the existence of the anomaly from tightly controlled experiments. It had not been observed in the complex environment of natural dunes.

Together with lead author Lior Rubanenko, Lapôtre and colleagues set out to test these theories with data from Mars, building on Lapôtre’s previous work connecting ripple size to atmospheric density through statistical analysis. This is the first time that scientists have used real data from the red planet to test—and, as it turns out, confirm—the prediction in hydrodynamic theory that the size of Mars’ smallest dunes, just like its ripples, should decrease where the air is thicker.

The authors used more than 130,000 high-resolution images of Mars captured by spacecraft and an AI-based computer vision model first developed to pick out distinct instances of different types of objects from a background—the outlines, for example, of three people, a bus, and two cars present in a photo of a city street. The Stanford team manually labeled dunes in a small subset of images, then used those examples to train the model to detect dune contours and estimate dune sizes across most of the Martian surface.

The authors analyzed this vast new dataset, along with calculations of atmospheric density across Mars. What they found was that the curiously middle-sized waves are not impact ripples at all. Instead, the distinct structures on Mars are more like miniature dunes that stop growing at a certain point because the predicted anomaly or shift in the fluid-like flow of air arises in the very thin, turbulent atmosphere close to Mars’ surface.

“Impact ripples form on Mars exactly like they do on Earth, and have more or less the same size,” said Rubanenko, who worked on the study as a postdoctoral scholar in geological sciences at Stanford. “This makes sense, since the mechanism that forms impact ripples has less to do with the properties of the atmosphere and more with the mechanics of sand transport.”

“Now that we know how the size of these ripples varies with atmospheric density and why, we can use the size of fossilized ripples in very old rocks to reconstruct the history of Mars’ atmosphere,” Lapôtre said.