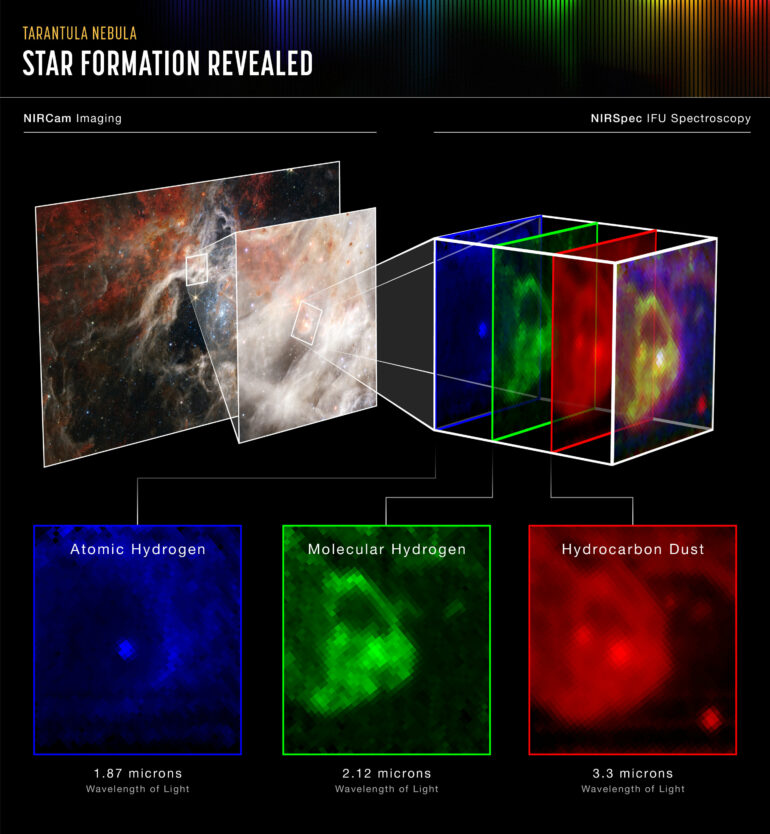 Astronomy is driven by big questions, and they don’t come much bigger than wondering how the first stars and galaxies began to form—eventually giving rise to our own existence.

The answers lie buried in the far distant universe, so distant that the light traveled billions of years to reach us, carrying the images of the first galaxies forming. This early period, just 200 million years after the Big Bang, lies beyond the already impressive reach of previous telescopes. Thanks to the NASA/ESA/CSA James Webb Space Telescope it is now coming into view.

But even the greatest space telescope is only as good as the instruments attached to it, and that is where the NIRSpec instrument comes in, one of the European contributions to the Webb mission.

“At the beginning of any instrument design is the ambition of the scientists. Exploring the formation of the first stars and galaxies really shaped NIRSpec,” says Pierre Ferruit, former Webb Project Scientist for ESA.

NIRSpec is Webb’s Near-InfraRed Spectrograph. Its job is to split the infrared light collected by Webb into its constituent wavelengths to form a spectrum. By measuring how the brightness varies across different wavelengths for an object in space, astronomers can extract a wealth of information about its physical characteristics and chemical composition. Before Webb and NIRSpec, it was impossible to do this for these most distant galaxies.

“Now that we can do this, a huge avenue is opening for us. We can now study far-away galaxies in the same way that we study closer objects,” says ESA astronomer Giovanna Giardino.

The data will allow astronomers to chart how galaxies evolved from the very early stages of the cosmos into the objects we see around us today.

NIRSpec was developed under ESA leadership with Airbus Defense and Space Germany as the prime contractor. Airbus assembled a team of seventy people across its sites in Ottobrunn and Friedrichshafen, Germany, and Toulouse, France. In addition, they were supported by NASA and 17 European subcontractors.

Early on, the team decided that the best way to achieve success was to not over complicate anything. “When you look at the design of NIRSpec, it’s pretty simple,” says Ralf Ehrenwinkler, Head of the NIRSpec Program at Airbus.

Keeping things simple in the way that light is routed through the instrument allowed the team to concentrate on the revolutionary aspects of the instrument. Chief among these was the need to efficiently record spectra from many objects at the same time—something that had never been done in space before.

This unique capability was directly necessitated by the desire to study the distant universe, where the galaxies are so faint. We would need to observe thousands of them to assemble a comprehensive picture of our early origins.

Our first glimpses of this realm came in 1995 with the historic Hubble Deep Field. Taking advantage of its undisturbed view of the cosmos, Hubble peered at a single patch of sky for ten consecutive days, starting on 18 December. The selected patch was little more than a tiny speck, about one 24-millionth of the whole sky. Yet Hubble revealed around 3000 previously unknown objects, most of them young galaxies billions of light-years away.

Thanks to Webb’s large 6.5-meter mirror, similar deep field images can now be taken in hours rather than days, and NIRSpec can record their spectra. But there are so many galaxies to be recorded that it would be completely impractical if NIRSpec could only take one spectrum at a time. So the team had to find a way to do it for many objects simultaneously.

“We’re able to collect spectra for up to 200 objects at a time, it’s a game changer,” says Maurice Te Plate, NIRSpec Systems Engineer for ESA.

To achieve this remarkable feat of multi-tasking, NIRSpec uses a ground-breaking device called a micro-shutter array. Manufactured and supplied by NASA’s Goddard Space Flight Center in Greenbelt, Maryland, U.S., it consists of around a quarter of a million tiny autonomous shutters. Each one is just 80 by 180 micrometers in size. They can be individually controlled to open or close as needed.

This solves one of the biggest problems of getting spectra from the distant universe: the spectra of closer objects, stars and less distant galaxies for example, get in the way of the fainter ones if they are not masked.

“We only leave open the ones that are over interesting objects, and the others are all closed. As such, only the light coming from the selected targets gets into the spectrograph optics to be analyzed,” says Maurice.

As well as the distant universe, NIRSpec is designed to look at celestial objects much closer to home: exoplanets. The atmospheres of these worlds absorb some of their parent star’s infrared light that passes through them. By collecting the star’s light and splitting it into a spectrum, NIRSpec allows astronomers to look for the tiny amounts of light that are missing at specific wavelengths. They can then identify which chemicals are present in the planet’s atmosphere as well as extract other information on physical conditions.

“We can now see the signatures of many crucial molecules in the atmosphere of exoplanets that are not possible to see from the ground, or with space instrumentation that existed before NIRSpec,” says Giovanna.

NIRSpec offers astronomers more capabilities. Most notably, it can divide larger objects like galaxies and nebulae into 30 slices and observe a spectrum for each slice, all in one shot. The resulting maps of physical conditions and chemistry are key to understanding the birth and death of stars and the workings of galaxies.

To work in the near infrared, NIRSpec, and most of the rest of Webb, must operate at just 40 Kelvin (–233°C), kept cold by Webb’s iconic sun shield. This presents a great challenge when making precise scientific instruments. Different materials shrink at different rates when cooled down, and this produces slight distortions in the instrument that affect its accuracy.

Webb begins hunt for the first stars and habitable worlds

“This was the most challenging thing and it is why Airbus decided to make this instrument mainly in silicon carbide. The base plate, most of the structures and the mirrors are all made out of silicon carbide,” says Ralf.

Silicon carbide is a ceramic material that, although difficult to work with, is extremely stable at low temperatures. By making most of the instrument out of it, thermal distortions could be all but eliminated. But it meant being completely certain of the design before manufacture started.

NIRSpec began as a block of silicon carbide in the so-called green-state, where the material is soft and can be worked. NIRSpec was then machined into shape in the same way as an artist works stone into a sculpture. All the holes and channels were drilled and once everything was ready, it was placed into a furnace to be ‘sintered.” This hardens the material, making it extremely hard to machine. So the team had to be completely certain of the design before they began manufacture.

“Working in silicon carbide was definitely a challenge, and I’m very proud that we succeeded in building it,” says Maurice. Partly as a result of their success, working with the material has now become something of a European specialty.

The success of NIRSpec was brought into sharp focus for the team when the first images and data started to flow back to Earth. “I’m not a scientist, I’m an engineer. So, I’m very happy to see that all the telemetry is green and NIRSpec is working. But I will share that I was in Baltimore with about 200 other people when the first images were released. We all had tears in our eyes,” says Ralf.

And now that data is rolling in continuously, there are a lot of others feeling the same.

“I am quite amazed at the quality of the spectra that we are getting. I can see that the observers are very happy also with the data. And for me, that’s what we built NIRSpec for. I think the whole team feel this. Now that NIRSpec is delivering, it feels great,” says Pierre.

Once the painstaking data analyses are completed, we will have new answers to those extraordinary questions so important to understanding our own existence: how the first galaxies and stars formed in our universe, and how frequently planets orbiting other stars offer conditions that would allow life as we know it to exist.

It is what NIRSpec was built to do: open many windows to look at big questions.


Citation:
How Webb’s NIRSpec instrument opened up 200 windows to our origins (2022, November 18)