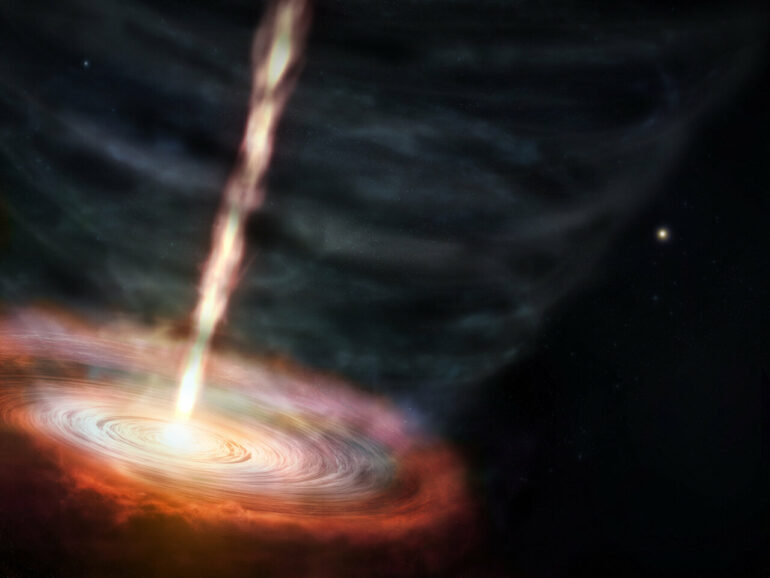 While using the Atacama Large Millimeter/submillimeter Array (ALMA) to study the masers around oddball star MWC 349A scientists discovered something unexpected: a previously unseen jet of material launching from the star’s gas disk at impossibly high speeds. What’s more, they believe the jet is caused by strong magnetic forces surrounding the star.

The discovery could help researchers to understand the nature and evolution of massive stars and how hydrogen masers are formed in space. The new observations were presented today (January 9) in a press conference at the 241st meeting of the American Astronomical Society (AAS) in Seattle, Washington.

Located roughly 3,900 light-years away from Earth in the constellation Cygnus, MWC 349A’s unique features make it a hot spot for scientific research in optical, infrared, and radio wavelengths. The massive star—roughly 30 times the mass of the sun—is one of the brightest radio sources in the sky, and one of only a handful of objects known to have hydrogen masers. These masers amplify microwave radio emissions, making it easier to study processes that are typically too small to see. It is this unique feature that allowed scientists to map MWC 349A’s disk in detail for the first time.

“A maser is like a naturally occurring laser,” said Sirina Prasad, an undergraduate research assistant at the Center for Astrophysics | Harvard & Smithsonian (CfA), and the primary author of the paper. “It’s an area in outer space that emits a really bright kind of light. We can see this light and trace it back to where it came from, bringing us one step closer to figuring out what’s really going on.”

Leveraging the resolving power of ALMA’s Band 6, developed by the U.S. National Science Foundation’s National Radio Astronomy Observatory (NRAO), the team was able to use the masers to uncover the previously unseen structures in the star’s immediate environment. Qizhou Zhang, a senior astrophysicist at CfA, and the project’s principal investigator added, “We used masers generated by hydrogen to probe the physical and dynamic structures in the gas surrounding MWC 349A and revealed a flattened gas disk with a diameter of 50 au, approximately the size of the Solar System, confirming the near-horizontal disk structure of the star. We also found a fast-moving jet component hidden within the winds flowing away from the star.”

The observed jet is ejecting material away from the star at a blistering 500 km per second. That’s akin to traveling the distance between San Diego, California, and Phoenix, Arizona, in the literal blink of an eye. According to researchers, it is probable that a jet moving this fast is being launched by a magnetic force. In the case of MWC 349A, that force could be a magnetohydrodynamic wind—a type of wind whose movement is dictated by the interplay between the star’s magnetic field and gases present in its surrounding disk.

“Our previous understanding of MWC 349A was that the star was surrounded by a rotating disk and photo-evaporating wind. Strong evidence for an additional collimated jet had not yet been seen in this system. Although we don’t yet know for certain where it comes from or how it is made, it could be that a magnetohydrodynamic wind is producing the jet, in which case the magnetic field is responsible for launching rotating material from the system,” said Prasad. “This could help us to better understand the disk-wind dynamics of MWC 349A, and the interplay between circumstellar disks, winds, and jets in other star systems.”

More information:
These results will be presented during a press conference at the 241st proceedings of the American Astronomical Society on Monday, January 9th at 2:15pm Pacific Standard Time (PST).