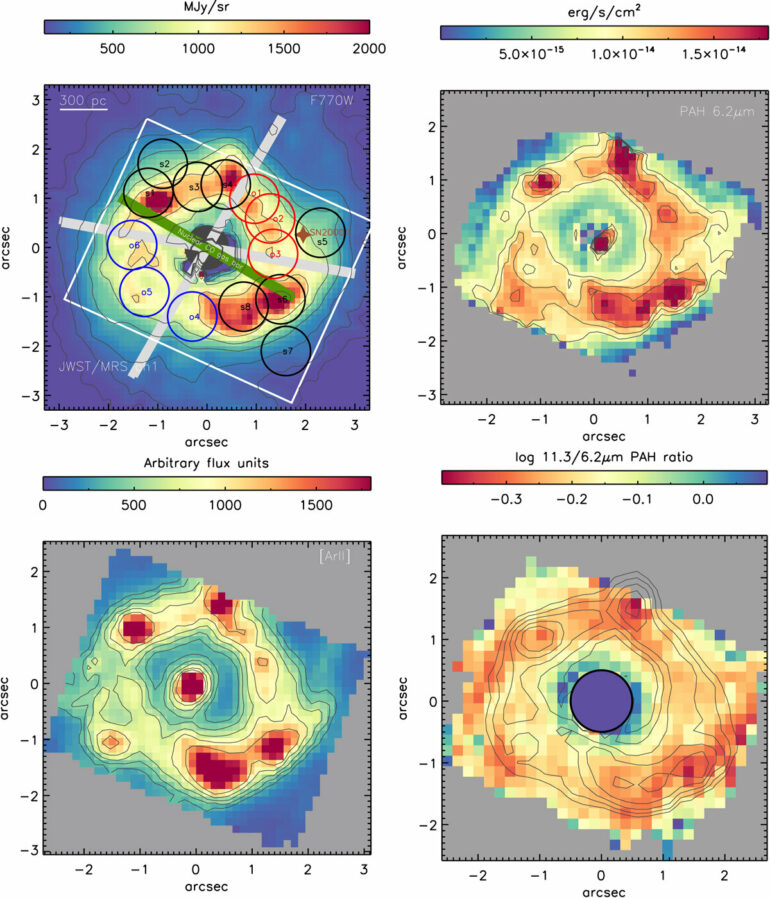 Research led by Oxford University is the first of its kind to study tiny dust molecules in the nuclear region of active galaxies using early observations from the James Webb Space Telescope (JWST). The study is the first U.K.-led paper to use spectroscopic data from the JWST’s Mid-Infrared Instrument (MIRI) and addresses one of the biggest challenges in modern astrophysics: understanding how galaxies form and evolve.

Tiny dust molecules known as polycyclic aromatic hydrocarbons (PAHs) are among the most widespread organic molecules in the universe and important astronomical tools. For instance, they are considered to be fundamental building blocks of prebiotic compounds, which may have played a key role in the origin of life. PAH molecules produce extremely bright emission bands in the infrared region when they are illuminated by stars, enabling astronomers to not only trace star-formation activity, but also to use them as sensitive barometers of the local physical conditions.

This new analysis, led by Dr. Ismael García-Bernete from Oxford University’s Department of Physics, used JWST’s cutting-edge instruments to characterize, for the first time, the PAH properties in the nuclear region of three luminous active galaxies. The study was based on spectroscopic data from the JWST’s MIRI which specifically measures light in the 5–28 micron wavelength range. The researchers then compared the observations with theoretical predictions for these molecules.

Surprisingly, the results overturned those of previous studies that had predicted that PAH molecules would be destroyed in the vicinity of the black hole at the center of an active galaxy. Instead, the analysis revealed that PAH molecules can actually survive in this region, even where very energetic photons could potentially rip them apart. A potential reason could be that the molecules are protected by large amounts of molecular gas in the nuclear region.

However, even where PAH molecules survived, the results showed that the supermassive black holes at the heart of galaxies had a significant impact on their properties. In particular, the proportion of larger and neutral molecules became greater, indicating that more fragile small and charged PAH molecules may have been destroyed. This brings severe limitations to using these PAH molecules to probe how rapidly an active galaxy makes new stars.

“This research is of great interest to the wider astronomy community, particularly those focused on the formation of planets and stars in the most distant and faint galaxies,” said Dr. García-Bernete. “It is incredible to think that we can observe PAH molecules in the nuclear region of a galaxy and the next step is to analyze a larger sample of active galaxies with different properties. This will enable us to better understand how PAH molecules survive and which are their specific properties in the nuclear region. Such knowledge is key to using PAHs as an accurate tool for characterizing the amount of star formation in galaxies, and thus, how galaxies evolve over time.”

The study is published in Astronomy and Astrophysics.

Scientists discover how galaxies can exist without dark matter