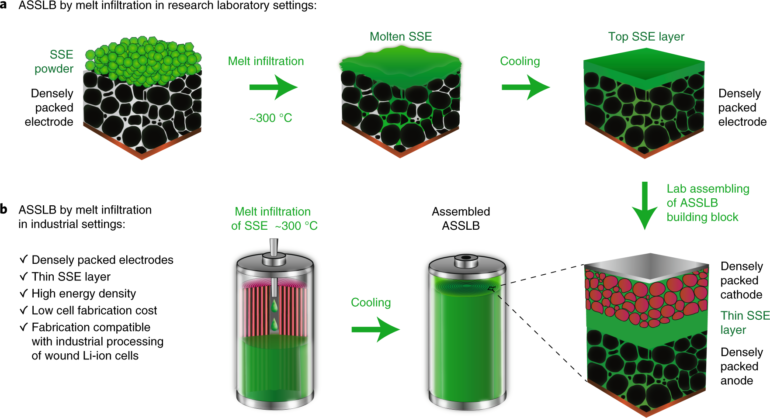 Osaka Metropolitan University scientists have successfully developed a new positive electrode material Na2FeS2, consisting of sodium, iron, and sulfur. During testing, batteries using the Na2FeS2 positive electrode had a high energy storage capacity and could be charged and discharged for more than 300 cycles. Because the Na2FeS2 is made of abundant inexpensive elements, it is expected to be used in all-solid-state sodium batteries with higher capacity and lower costs.

A research group led by Associate Professor Atsushi Sakuda, President Masahiro Tatsumisago, and Professor Akitoshi Hayashi, at the Graduate School of Engineering, Osaka Metropolitan University, has successfully developed a new positive electrode, made of Na2FeS2, for all-solid-state sodium batteries. The batteries have a high energy storage capacity, high reversibility and use inexpensive elements that are readily available.

Furthermore, the batteries using the Na2FeS2 as a positive electrode can be charged and discharged for more than 300 cycles, due to the unique crystal structure of the Na2FeS2 that gives the electrode a long lifespan. Most high-capacity metal sulfide electrodes rely on conversion-type reactions, during which large rearrangements—during charging and discharging—are associated with inhomogeneous reactions and degradation. The Na2FeS2, on the other hand, achieves a high degree of reversibility during charging and discharging, by undergoing insertion-type reactions, which allow the electrode to retain its crystal structure over many cycles.

“The new Na2FeS2 positive electrodes are well balanced in terms of materials, cost, and lifetime; we expect them to be put to practical use in all-solid-state sodium batteries,” Professor Sakuda concluded. “In the future, we will continue our research to develop cheaper all-solid-state sodium batteries with even higher performance, by examining high input and output for rapid recharging, as well as making and testing of superior anode materials.”

In Apps and WebSmartphones
on 18 February 20212 min read