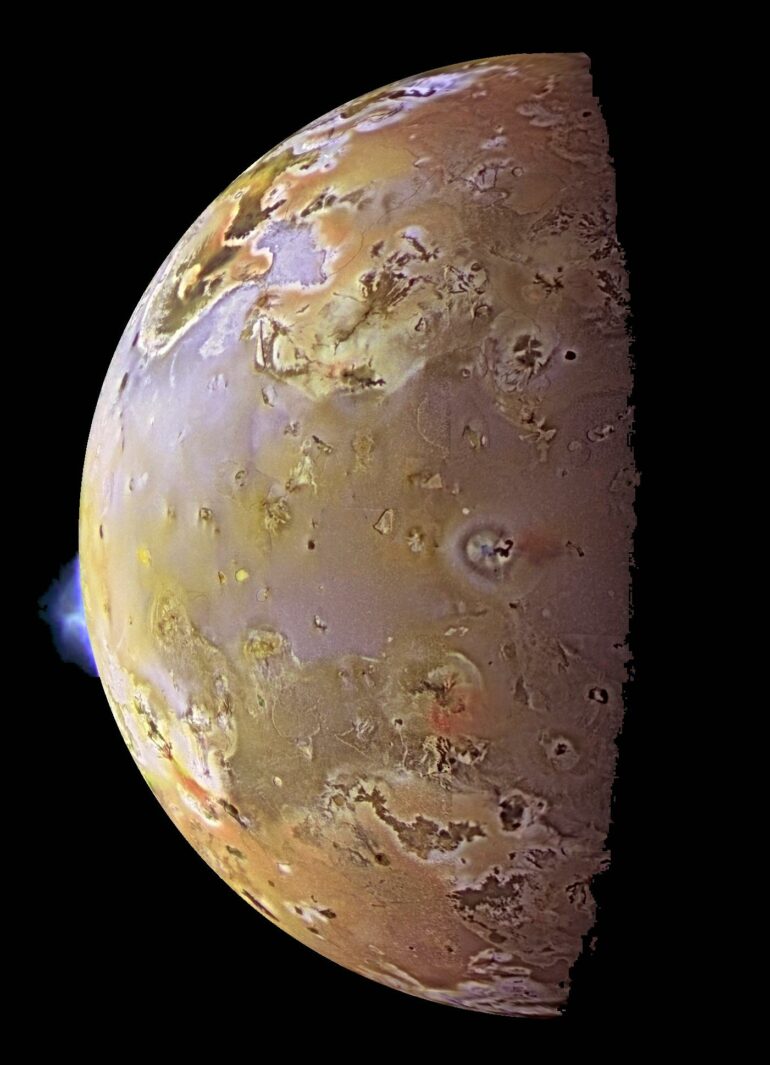 PSI Senior Scientist Morgenthaler has been using IoIO, located near Benson, Arizona, to monitor volcanic activity on Io since 2017. The observations show some sort of outburst nearly every year, but the largest yet was seen in the fall of 2022.

Io is the innermost of Jupiter’s four large moons and is the most volcanic body in the Solar System thanks to the tidal stresses it feels from Jupiter and two of its other large satellites, Europa and Ganymede.

IoIO uses a coronagraphic technique which dims the light coming from Jupiter to enable imaging of faint gases near the very bright planet. A brightening of two of these gases, sodium and ionized sulfur, began between July and September 2022 and lasted until December 2022. The ionized sulfur, which forms a donut-like structure that encircles Jupiter and is called the Io plasma torus, was curiously not nearly as bright in this outburst as previously seen. “This could be telling us something about the composition of the volcanic activity that produced the outburst or it could be telling us that the torus is more efficient at ridding itself of material when more material is thrown into it,” Morgenthaler said.

The observations have profound implications for NASA’s Juno mission, which has been orbiting Jupiter since 2016. Juno flew past Europa during the outburst and is gradually approaching Io for a close flyby December 2023. Several of Juno’s instruments are sensitive to changes in the plasma environment around Jupiter and Io that can be traced directly to the type of volcanic activity observed by IoIO. “Juno measurements may be able to tell us if this volcanic outburst had a different composition than previous ones,” Morgenthaler said.

“One of the exciting things about these observations is that they can be reproduced by almost any small college or ambitious amateur astronomer,” said Morgenthaler. “Almost all of the parts used to build IoIO are available at a high-end camera shop or telescope store.”

Having one or more copies of IoIO running somewhere else would be very helpful in avoiding weather gaps and could potentially provide more time coverage each night of Jupiter’s highly dynamic Io plasma torus and sodium nebula. “It would be great to see another IoIO come on line before Juno gets to Jupiter next December,” Morgenthaler said.