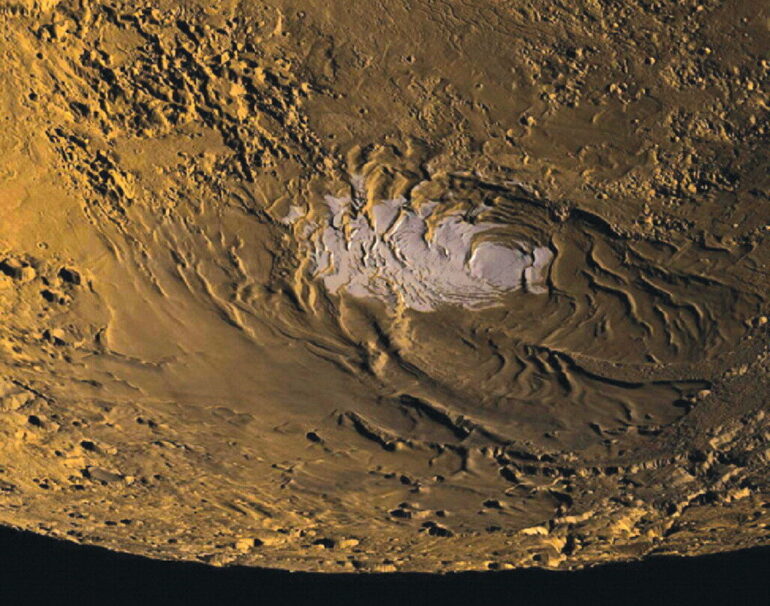 There is water in many places on Mars, including most of both polar ice caps—all in the frozen form.

But recently, bright reflections were detected beneath the surface of Mars’ South Pole Layered Deposit (SPLD), a 1.4-kilometer-thick formation of relatively pure water ice, by the European Space Agency’s Mars Express orbiter. Some scientists interpreted the observations, collected by the MARSIS (Mars Advanced Radar for Subsurface and Ionosphere Sounding) instrument, as evidence of liquid water.

Dan Lalich, research associate with Cornell Center for Astrophysics and Planetary Science in the College of Arts and Sciences (A&S), said that while such a possibility is exciting, he and other Cornell researchers argue the strong reflections are not necessarily evidence that the SPLD contains liquid water.

They’ve come up with an alternative explanation, which they detail in “Explaining Bright Radar Reflections Below the South Pole of Mars Without Liquid Water” published Sept. 26 in Nature Astronomy.

Using computer simulations, they demonstrate that similar strong reflections can be generated by interference between geological layers, without liquid water or other rare materials.

“This result, combined with other recent work, calls into question the likelihood of finding liquid water below the SPLD,” wrote the research team, which includes Alexander Hayes, associate professor of astronomy, director of CCAPS, director of the Spacecraft Planetary Image Facility and the Louis Salvatore ’92 Faculty Leadership Fellow; and Valerio Poggiali, CCAPS research associate.

“On Earth, reflections that bright are often an indication of liquid water, even buried lakes like Lake Vostok [under the surface of the East Antarctic Ice Sheet],” Lalich said. “But on Mars, the prevailing opinion was that it should be too cold for similar lakes to form.”

But the fact remains, Lalich said, that the bright reflection exists and requires an explanation.

Lalich uses radar data to study planetary surfaces, and he’s particularly interested in the recent climate evolution of Mars. He’s focused recently on modeling radar reflections off the Martian polar caps, positioning him well to investigate a claim of liquid water on the planet.

Lalich used a one-dimensional modeling procedure commonly used to interpret MARSIS observations. He created simulations with layers composed of four materials—atmosphere, water ice, carbon dioxide (CO2) ice and basalt—and assigned each layer a corresponding permittivity, an intrinsic property of the material describing its interaction with electromagnetic radiation passing through it.

Simulations using three layers—two CO2 layers, separated by a layer of dusty ice—produced reflections as bright as the actual observations.

“I used CO2 layers embedded within the water ice because we know it already exists in large quantities near the surface of the ice cap,” Lalich said. “In principle, though, I could have used rock layers or even particularly dusty water ice and I would have gotten similar results. The point of this paper is really that the composition of the basal layers is less important than the layer thicknesses and separations.”

From the models, the researchers determined that the thickness of the layers and how far apart they are have a bigger impact on reflection power than the composition of the layers. While no single simplified stratigraphy in the paper can explain every observation, the researchers wrote, “we have shown that it is possible to create bright reflections without liquid water.”

In 2021, Lalich contributed to research that found that under the right conditions, a class of minerals called smectites, common on Mars, could produce a reflection similar to the one observed from MARSIS.

It’s important to figure out what’s not liquid water on Mars, Lalich said, because the stakes are so high. “If there is liquid water,” he said, “maybe there’s life, or maybe we could use it for future human missions to Mars.”

Liquid water could also have important implications for the age of the polar cap, the internal heating of Mars, and how the planet’s climate has evolved in the geologically recent past—and Lalich does not rule it out entirely.

“None of the work we’ve done disproves the possible existence of liquid water down there,” Lalich said. “We just think the interference hypothesis is more consistent with other observations. I’m not sure anything short of a drill could prove either side of this debate definitively right or wrong.”