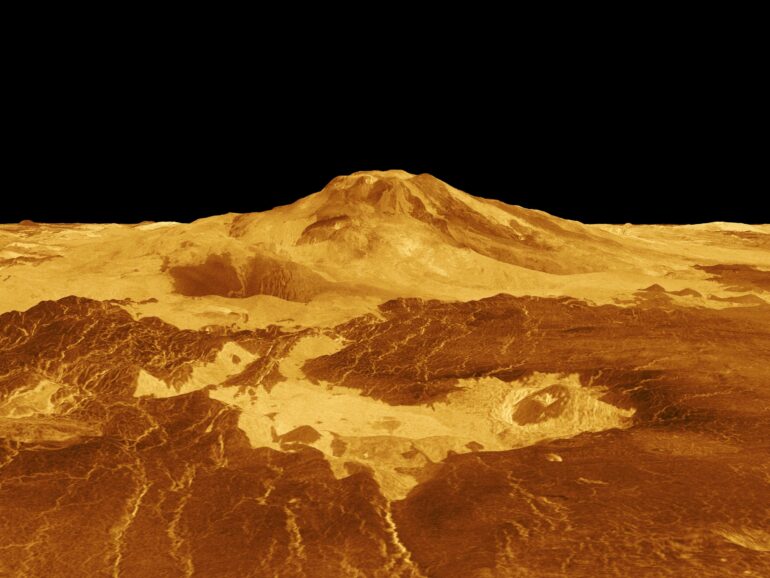 Volcanic activity lasting hundreds to thousands of centuries and erupting massive amounts of material may have helped transform Venus from a temperate and wet world to the acidic hothouse it is today, a NASA paper suggests.

The paper also discusses these “large igneous provinces” in Earth’s history which caused several mass extinctions on our own planet millions of years ago.

“By understanding the record of large igneous provinces on Earth and Venus, we can determine if these events may have caused Venus’ present condition,” said Dr. Michael J. Way, of NASA’s Goddard Institute for Space Studies in New York. Way is lead author on the paper, published April 22 in The Planetary Science Journal.

Large igneous provinces are the products of periods of large-scale volcanism lasting tens of thousands or even hundreds of thousands of years. They can deposit more than 100,000 cubic miles of volcanic rock onto the surface. At the upper end, this could be enough molten rock to bury the entire state of Texas half a mile deep.

Venus today boasts surface temperatures of around 864 F on average, and an atmosphere 90 times the surface pressure of Earth’s. According to the study, these massive volcanic outpourings may have initiated these conditions sometime in Venus’ ancient history. In particular, the occurrence of several such eruptions in a short span of geologic time (within a million years) could have led to a runaway greenhouse effect which kicked off the planet’s transition from wet and temperate to hot and dry.

Large fields of solidified volcanic rock cover 80% of Venus’ surface in total, Way said. “While we’re not yet sure how often the events which created these fields occurred, we should be able to narrow it down by studying Earth’s own history.”

Life on Earth has endured at least five major mass extinction events since the origin of multicellular life about 540 million years ago, each of which wiped out more than 50% of animal life across the planet. According to this study and others before it, the majority of these extinction events were caused or exacerbated by the kinds of eruptions that produce large igneous provinces. In Earth’s case, the climate disruptions from these events were not sufficient to cause a runaway greenhouse effect as they were on Venus, for reasons that Way and other scientists are still working to determine.

NASA’s next missions to Venus, scheduled for launch in the late 2020s—the Deep Atmosphere Venus Investigation of Noble gases, Chemistry, and Imaging (DAVINCI) mission and the Venus Emissivity, Radio science, InSAR, Topography, And Spectroscopy (VERITAS) mission—aim to study the origin, history, and present state of Venus in unprecedented detail.

“A primary goal of DAVINCI is to narrow down the history of water on Venus and when it may have disappeared, providing more insight into how Venus’ climate has changed over time,” Way said.

The DAVINCI mission will precede VERITAS, an orbiter designed to investigate the surface and interior of Venus from high above, to better understand its volcanic and volatile history and thus Venus’ path to its current state. The data from both missions could help scientists to narrow down the exact record of how Venus may have transitioned from wet and temperate to dry and sweltering. It may also help us to better understand how volcanism here on Earth has affected life in the past, and how it may continue to do so in the future.