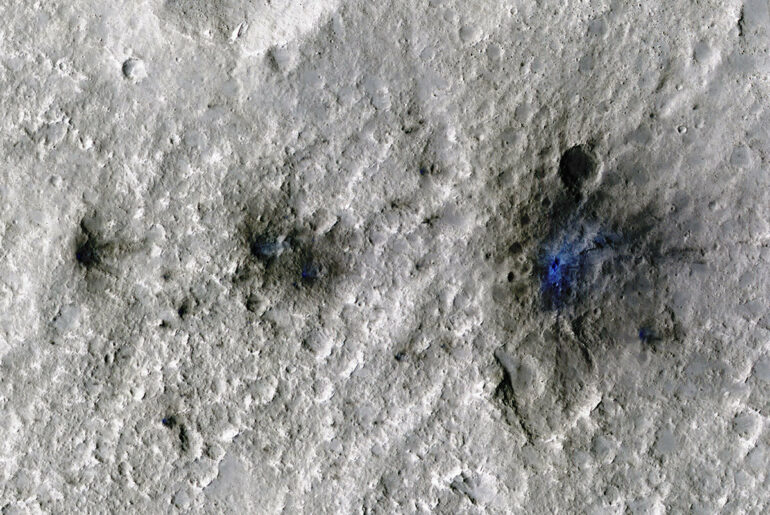 NASA’s InSight Mars lander has detected seismic waves from four space rocks that crashed on Mars in 2020 and 2021.

Not only do these represent the first impacts detected by the spacecraft’s seismometer since InSight touched down on Mars in 2018, but it also marks the first time seismic and acoustic waves from an impact have been detected on the red planet —a development providing scientists a new way to study Mars’s crust, mantle and core.

A new study published in Nature Geoscience—on which Brown University Assistant Professor (research) of Earth, Environmental and Planetary Sciences Ingrid Daubar is a co-author—details the impacts, which ranged between 53 and 180 miles from InSight’s location, a region of Mars called Elysium Planitia.

“It was super exciting,” Daubar recalled of the impacts. “My favorite images are the ones of the craters themselves. After three years of waiting for an impact, those craters looked beautiful.”

Of the four confirmed meteoroids, which is the term used for space rocks before they hit the ground, the first one the team found made the most dramatic entrance: It entered Mars’ atmosphere on Sept. 5, 2021, exploding into at least three shards that each left craters behind.

When NASA’s Mars Reconnaissance Orbiter flew over the estimated impact site to confirm the location, it used its black-and-white context camera to reveal three darkened spots on the surface. After locating these spots, the orbiter’s team used the High-Resolution Imaging Science Experiment camera to get a color close-up of the craters. There is also audio of the impacts available.

“Having a really precise location for the source of the impacts calibrates all other data for the mission,” Daubar said. “This validates the estimates we’ve made and will allow us to do this more precisely… It also tells us a lot about the impact process itself and the seismic results. We’ve never actually seen this before.”

Researchers have puzzled over why they haven’t detected more meteoroid impacts on Mars. The red planet is next to the solar system’s main asteroid belt, which provides an ample supply of space rocks to scar the planet’s surface. Because Mars’ atmosphere is just 1% as thick as Earth’s, more meteoroids pass through it without disintegrating.

Moreover, InSight’s seismometer has detected more than 1,300 “marsquakes.” Provided by France’s space agency, the Centre National d’Études Spatiales, the instrument is so sensitive that it can detect seismic waves from thousands of miles away. But the Sept. 5, 2021, event marks the first time an impact was detected.

InSight’s team suspects that other impacts may have been obscured by noise from wind or seasonal changes in the atmosphere. Now that the distinctive seismic signature of an impact on Mars has been discovered, scientists expect to find more hiding within InSight’s nearly four years of data.

For Daubar—who in addition to her role at Brown is a research scientist with the NASA Jet Propulsion Laboratory leading the Impact Cratering Working Group on the InSight mission—she sees the data’s potential for enabling further study of other planets, including Earth.

“In a broader sense, the reason we study other planets is to understand our own planet better,” she said.

Daubar has been an assistant professor of planetary sciences at Brown for three years, but her cosmic curiosity developed much earlier.

“I was lucky enough that my public high school in East Lyme, Connecticut, had a planetarium,” Daubar said. “It sparked my interest in astronomy and space.”

In college, she majored in astronomy at Cornell University. She went on to earn a Ph.D. in planetary sciences at the University of Arizona and became a research scientist with JPL.

“I love craters,” Daubar said. “I think they’re one of more exciting planetary processes we can study.”

Daubar is among several hundred scientists and engineers around the world contributing to the InSight mission, she said.

“I’m a visual person and I’ve worked on cameras a lot,” she said, “so to me, having the visual evidence of this physical phenomenon is really exciting. We actually have ‘before and after’ images. It’s so cool to me that surface of this plant is changing right now. It’s not some ancient geologic process.”

Science behind the strikes

The data from the meteoroid impacts offer various clues that will help researchers better understand Mars.

“We have tons of data, which is really exciting for scientists,” Daubar said. “We’ve explored the planet a lot. There’s a lot we know—and a lot we don’t know.”

Most marsquakes are caused by subsurface rocks cracking from heat and pressure. Studying how the resulting seismic waves change as they move through different material provides scientists a way to study Mars’s crust, mantle and core.

The four impacts confirmed so far produced small quakes with a magnitude of no more than 2.0. That doesn’t provide scientists with a glimpse deeper than the Martian crust, whereas seismic signals from larger quakes, like the magnitude 5 temblor that occurred in May 2022, can reveal details of the planet’s mantle and core.

“These particular impacts are really small and close—they didn’t go through mantle and core,” Daubar said. “But it allows us to use this knowledge for the whole catalog of events with a new understanding from these data points on location and source.”

Importantly, the impacts will be critical to refining Mars’s timeline.

“Impacts are the clocks of the solar system,” said Raphael Garcia, of Institut Supérieur de l’Aéronautique et de l’Espace in Toulouse, France, who is the study’s lead author. “We need to know the impact rate today to estimate the age of different surfaces.”

Scientists can approximate the age of a planet’s surface by counting its impact craters. On Mars, the surface has had more time to accumulate impact craters of various sizes because the planet lacks the tectonic plate movement and active volcanism that constantly renews the surface, as they do on Earth. By calibrating statistical models based on how often they see impacts occurring now, scientists can estimate how many more impacts happened earlier in the solar system’s history.

“Seismology is one way we can tell what’s inside a planet,” Daubar explained. “The InSight mission is the first mission to actually study the interior of the planet.”

InSight’s data, in combination with orbital images, can be used to rebuild a meteoroid’s trajectory and how big its shock wave was. Every meteoroid creates a shock wave as it hits the atmosphere and an explosion as it hits the ground. These events send sound waves through the atmosphere. The bigger the explosion, the more this sound wave tilts the ground when it reaches InSight. The lander’s seismometer is sensitive enough to measure how much the ground tilts from such an event and in what direction.

“We’re learning more about impact process itself,” Garcia said. “We can match different sizes of craters to specific seismic and acoustic waves now.”