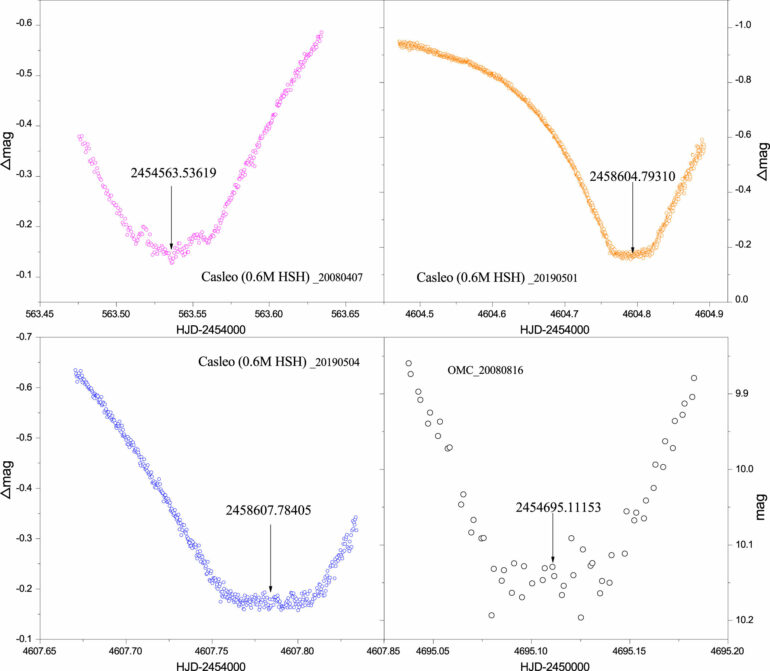 A research team led by Prof. Qian Shengbang from Yunnan Observatories of the Chinese Academy of Sciences discovered a newly formed massive contact binary in a hierarchical triple system. Its third body is also a massive star obtained for the first time.

The study was published in The Astrophysical Journal on January 10.

The researchers studied the light curves of V606 Centauri, an early B-type close binary, based on the high-precision continuous data from Transiting Exoplanet Survey Satellite (TESS). They obtained photometric observations of minima from the 0.60-m Helen Sawyer Hogg Telescope in Argentina.

Additionally, they collected the light curve data from worldwide photometric surveys, such as Digital Access to a Sky Century at Harvard, All Sky Automated Survey and Bochum Survey of the Southern Galactic Disk, and obtained more eclipse times spanning around 120 years.

Based on all available data, they constructed the O-C diagram and gave a detailed analysis of the orbital period changes for the first time.

“V606 Centauri is a marginal contact binary with a very low fill-out factor of about 2 percent,” said Ph.D. student Li Fuxing, the first author of the study. The O-C results showed a downward parabolic change together with a cyclic oscillation, and indicated the mass transfer from the more massive component to the less massive one between components with a massive third body.

Both the marginal contact configuration and the continuous period decrease suggested that V606 Centauri is a newly formed contact binary via Case A mass transfer.

“V606 Centauri is in a unique stage of evolution different from that of massive binaries that have been reported and it is a newly formed massive contact binary created by mass transfer from the primary to the secondary,” said Prof. Qian.