Say hello to Sagittarius A*, the black hole at the center of the Milky Way galaxy 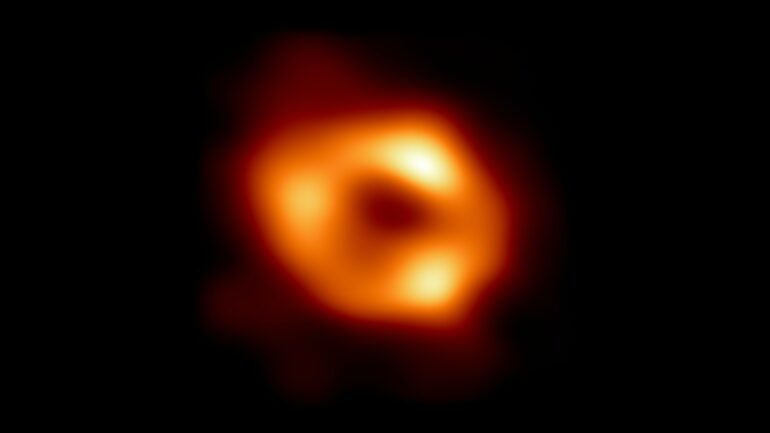 On May 12, 2022, astronomers on the Event Horizon Telescope team released an image of a black hole called Sagittarius A* that lies at the center of the Milky Way galaxy. Chris Impey, an astronomer at the University of Arizona, explains how the team got this image and why it is such a big deal.

Sagittarius A* sits at the the center of our Milky Way galaxy, in the direction of the Sagittarius constellation. For decades, astronomers have been measuring blasts of radio waves from an extremely compact source there.

In the 1980s, two teams of astronomers started tracking the motions of stars near this mysterious source of radio waves. They saw stars whirling around a dark object at speeds up to a third of the speed of light. Their motions suggested that at the center of the Milky Way was a black hole 4 million times the mass of the Sun. Reinhard Genzel and Andrea Ghez later shared the Nobel Prize in Physics for this discovery.

The size of a black hole is defined by its event horizon – a distance from the center of the black hole within which nothing can escape. Scientists had previously been able to calculate that Sagittarius A* is 16 million miles (26 million kilometers) in diameter.

The Milky Way’s black hole is huge compared to the black holes left behind when massive stars die. But astronomers think there are supermassive black holes at the center of nearly all galaxies. Compared to most of these, Sagittarius A* is meager and unremarkable.

2. What does the new image show?

Black holes themselves are completely dark, since nothing, not even light, can escape their gravity. But black holes are surrounded by clouds of gas, and astronomers can measure this gas to infer images of the black holes within. The central dark region in the image is a shadow cast by the black hole onto the gas. The bright ring is the gas itself glowing. The bright spots in the ring show areas of hotter gas that may one day fall into the black hole.

Some of the gas visible in the image is actually behind Sagittarius A*. Light from that gas is being bent by the powerful gravity of the black hole toward Earth. This effect, called gravitational lensing, is a core prediction of general relativity.

3. What went into producing this image?

Supermassive black holes are extremely hard to measure. They are far away and shrouded by the gas and dust that clogs the center of galaxies. They are also relatively small compared to the vastness of space….