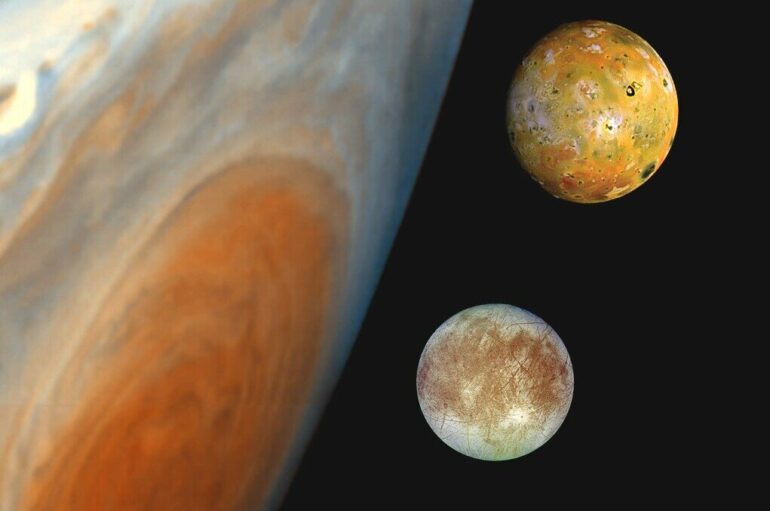 SwRI will further these studies using the Europa Ultraviolet Spectrograph (Europa-UVS), which will observe Jupiter’s fourth largest moon from aboard NASA’s Europa Clipper, scheduled to launch in 2024. Scientists are almost certain that hidden beneath Europa’s icy surface is a saltwater ocean containing nearly twice as much water as is in all of Earth’s oceans. This moon may be the most promising place in our solar system suitable for some form of life beyond Earth.

“Europa’s relatively young surface is primarily composed of water ice, although other materials have been detected across its surface,” said Dr. Tracy Becker, lead author of a paper describing these UV observations. “Determining whether these other materials are native to Europa is important for understanding Europa’s formation and subsequent evolution.”

Assessing the surface material can provide insights into the composition of the subsurface ocean. SwRI’s dataset is the first to produce a near-global map of sulfur dioxide that correlates with large-scale darker regions in both the visible and the ultraviolet wavelengths.

“The results were not surprising, but we did get much better coverage and resolution than previous observations,” said SwRI’s Dr. Philippa Molyneux, a co-author of the paper. “Most of the sulfur dioxide is seen on the ‘trailing’ hemisphere of Europa. It’s likely concentrated there because Jupiter’s co-rotating magnetic field traps sulfur particles spewing from Io’s volcanoes and slams them against the backside of Europa.”

Io is another of Jupiter’s largest moons but, in contrast, is considered the most volcanic body in the solar system. Jupiter’s magnetic field can cause chemical reactions between the water ice and the sulfur, creating sulfur dioxide on Europa’s surface.

“In addition to studying the sulfur dioxide on the surface, we are continuing to try to understand the puzzle of why Europa—which has a surface that is known to be dominated by water ice—does not look like water ice at ultraviolet wavelengths, as confirmed by this paper,” Becker said. “We are actively working to understand why.”

The research was published in The Planetary Science Journal.