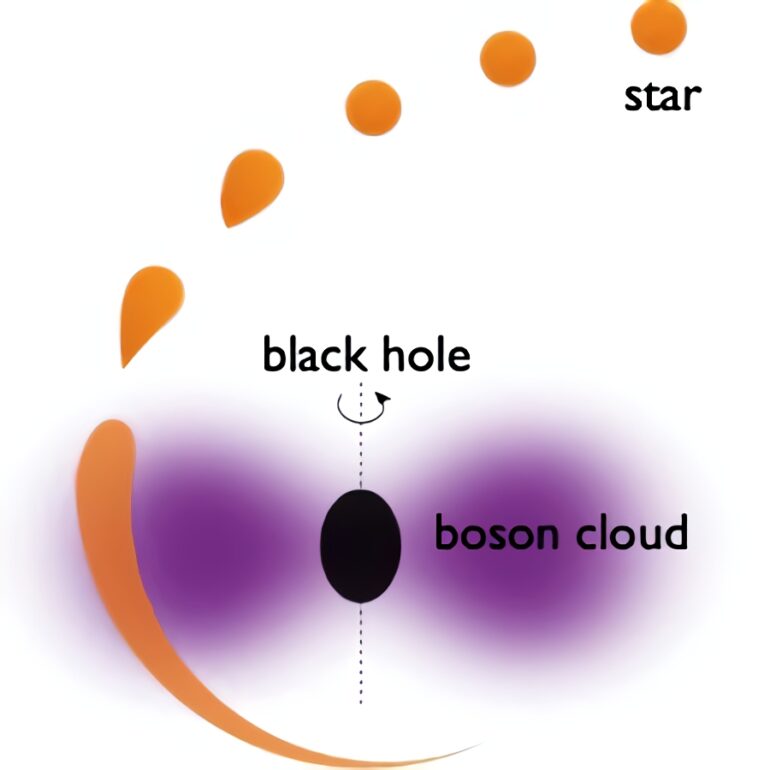 Much of the matter in the universe remains unknown and undefined, yet theoretical physicists continue to gain clues to the properties of dark matter and black holes. A study by a team of scientists including three from Stony Brook University proposes a novel method to search for new particles not currently contained in the standard model of particle physics. Their method, published in Nature Communications, could shed light on the nature of dark matter.

Stars that pass close to the supermassive black holes located in the center of galaxies can be disrupted by tidal forces, leading to flares that are observed as bright transient events in sky surveys. The rate for these events to occur depends on the black hole spins, which in turn can be affected by ultra-light bosons (hypothetical particles with minute masses) due to superradiance. The research team performed a detailed analysis of these effects, and they discovered that searches for stellar tidal-disruptions have the potential to uncover the existence of ultra-light bosons.

According to co-author Rouven Essig, the team demonstrated that due to the dependence of the stellar disruption rates on the black hole’s spin, and given that ultra-light bosons uniquely affect such spins because of the superradiant instability, stellar tidal disruption rate measurements can be used to probe these new particles.

Additionally, the researchers suggest that with the enormous dataset of stellar tidal disruptions that is provided by the Vera Rubin Observatory, these data in combination with the researchers’ work can be used to discover or rule out a variety of ultra-light boson models over wide regions of parameter space.

Their analysis also indicates that measurements of stellar tidal disruption rates may be used to constrain a variety of supermassive black hole spin distributions and determine if close-to maximal spins are preferred.

“The potential implications of our findings are profound. The discovery of new ultra-light bosons in stellar tidal disruption surveys would be revolutionary for fundamental physics,” says Essig.

“These new particles could be the dark matter, and thus the work could open up windows into a complex dark sector that hints toward more fundamental descriptions of nature such as string theory. Our proposal may have other applications too, as measurements of supermassive black hole spins can be used to study the black hole’s formation history,” says Rosalba Perna.

“And ultimately, if these new particles exist they will affect how stars that get close to a supermassive black hole are disrupted by the black hole’s strong gravitational pull,” adds Peizhi.