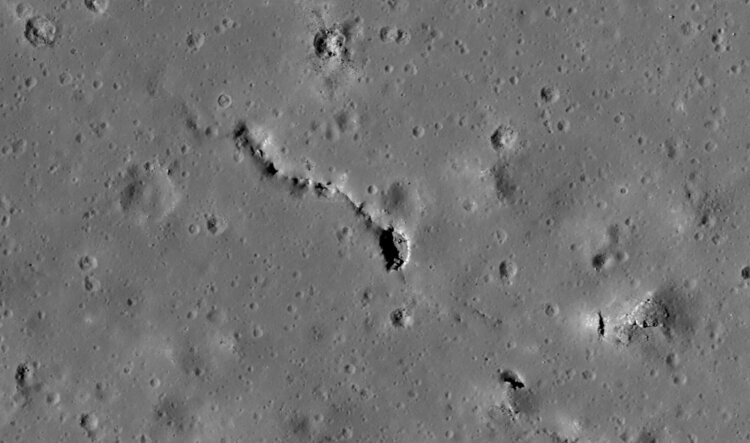 The moon may be a mostly uniform expanse of gray, but if you look closely, you can still find a few nooks and crannies in its surface, from deep trenches to pits and maybe even caves.

Now, researchers at CU Boulder have set out to explore what the environment might be like inside some of these shadowy features—many of which are too dark to see clearly from orbit.

The team’s preliminary results suggest that pits and caves on the moon showcase remarkably stable conditions. They don’t seem to experience the wild swings in temperature that are common at the moon’s surface, said Andrew Wilcoski, a graduate student in the Department of Astrophysical and Planetary Sciences at CU Boulder. He will present the group’s initial findings Friday at the American Geophysical Union fall meeting in New Orleans.

“If we’re hoping to send people into these caves in the decades ahead, we want to know what they should expect down there,” said Wilcoski, a co-author of the new research.

The take-home message: What is it like to go spelunking on the moon?

Future lunar explorers may want to pay attention. Pits and caves, Wilcoski explained, are potentially ideal places for the space colonies of the future. Their walls and crevices are naturally homey and might protect humans from the sun’s dangerous radiation. Some scientists have also wondered if lunar pits and caves could be rich in natural resources that astronauts covet. That includes ice, which explorers could mine to collect water for drinking, showers and even rocket fuel.

To find out for sure, Wilcoski and planetary scientist Paul Hayne drew on computer simulations to try to recreate the conditions below the moon’s surface.

Their initial findings present a mixed bag: The stable environments of lunar pits and caves could help astronauts weather some of the moon’s worst extremes. Those same conditions, however, may make them less-than-perfect spots to go looking for water.

“They’re attractive options for establishing a long-term human presence on the moon,” said Hayne, assistant professor in the Laboratory for Atmospheric and Space Physics at CU Boulder.

Hayne added that no one knows how many pits and caves might be hiding on the moon. One scientific team that went searching for them in 2014 found more than 200. Many looked like round holes punched into the lunar surface, and they ranged from about a half a mile wide to the size of a London double-decker bus.

Scientists are excited about their potential in part because the moon itself is such an extreme environment.

“As you get close to the equator, temperatures can reach more than 100 degrees Celsius during the day on the surface, and it will get down to 170 degrees Celsius below zero at night,” Wilcoski said.

The researchers developed simulations to track the temperatures in hypothetical lunar pits and caves of various shapes and sizes as the sun rose and set over the moon. They found that how these formations are oriented matters. If a cave’s mouth points directly at the rising sun, for example, it will get a lot warmer than if it points away.

Just like caves on Earth, caves on the moon seemed to sustain relatively balmy environments. Most of the team’s simulated caves hosted temperatures of about minus 120 to minus 70 degrees Celsius (minus 184 to minus 94 degrees Fahrenheit) throughout an entire lunar day.

Those aren’t great conditions for water frozen into ice, Wilcoski said. Previous research by Hayne and other scientists has shown that water ice may have accumulated over billions of years in certain sites on the moon that researchers call “cold traps.” But, based on results from the new simulations, many lunar pits and caves are probably too warm to harbor similar treasure troves. In other words, go somewhere else to fill up your Nalgene.

“One intriguing possibility would be to establish a protected base station inside a lunar pit or cave near one of the polar craters containing water ice,” Hayne said. “Astronauts could then venture out when conditions were right in order to collect ice-rich soil.”