These are the best places to search for habitable exomoons 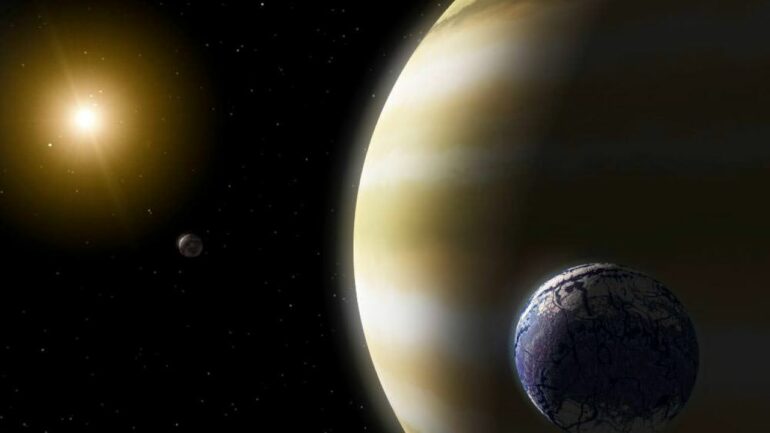 Our solar system contains eight planets and more than 200 moons. The large majority of those moons have no chance of being habitable, but some of them—Europa and Enceladus, for example—are strong candidates in the search for life.

Is it the same in other solar systems?

Moons in our solar system show as much variety as planets, maybe more. There are moons where a sheath of ice tens of kilometers thick hides a warm ocean. There’s a moon with stable bodies of surface liquid. There’s a moon that experiences near-constant volcanic activity.

Some moons formed via accretion. At least one moon, Earth’s, formed from a collision between protoplanets. Some moons are probably captured asteroids. Some moons might be captured Kuiper belt objects. There are moons larger than some of the planets and moons so small they’re barely moons at all.

The search for habitable worlds is focused on exoplanets, mainly because we can’t see exomoons. But exoplanets must have exomoons if our solar system is any indication. “Even though no exomoons are known, we have no reason to assume that moon formation does not occur the same way as it did in the solar system,” the authors of a new paper write. And there may be far more exomoons than there are exoplanets. Is there some way we can begin to understand what exomoons are promising targets in the search for habitability?

The authors of the new study think so. The study is “A target list for searching for habitable exomoons,” published in the Monthly Notices of the Royal Astronomical Society (MNRAS.) The lead author is Vera Dobos, an astronomer at the Kapteyn Astronomical Institute at the University of Groningen, Netherlands.

What we know about the habitability of exoplanets and exomoons is dwarfed by what we don’t know. Studies like this are some of our first forays into understanding exomoon habitability. We haven’t even found our first exomoon, but we soon will. (It looked like astronomers might have found one in 2018, but now it’s uncertain.) Studies like this one are helping the science community prepare for exomoon discoveries.

When we start finding them, we may face an avalanche of exomoon discoveries. As lead author Dobos says, “For this reason, it is important to have basic knowledge about exomoons by the first detections, that will help in selecting further observation targets.”

Since we haven’t discovered any exomoons yet, this study investigates the habitability of hypothetical exomoons that might be orbiting known exoplanets. “Even though no exomoons are known today, their potential habitability is an interesting and important question,” the authors write. Their study provides a target list to maximize our chances of finding potentially habitable exomoons.

The study focuses on large rocky exomoons that can hold onto their atmospheres. The authors also examined the heat available to exomoons from the star or stars in their solar system and tidal heating. They ignored radiogenic heating, which could provide enough heat to maintain a subsurface ocean, like on Europa and Enceladus, and maybe others.

The researchers started with the Extrasolar Planets Encyclopedia, then excluded exoplanets based on the following criteria:

Planets greater than 13 Jupiter masses.Planets with a host star smaller than 0.08 solar masses (to exclude brown dwarfs).Planets of which neither the orbital period nor the semimajor axis is known.Planets for which none of the following three parameters are known: mass, minimum mass, and radius.

After those exclusions, they ended up with 4,140 known exoplanets. For each of those planets, they simulated 100,000 moons. The result is the habitability probability for each simulated moon, which the researchers define as the ratio of habitable test moons compared to the 100,000 simulated moons.

But one thing modifies these results: the host stars. The team worked with the Extrasolar Planets Encyclopedia as their input, and it doesn’t list the type of star for over half of the exoplanets it contains. And for the stars it does list, their current evolutionary state isn’t listed. So some of the host stars are not conducive to habitability. So even if the simulations resulted in higher habitability probabilities for exomoons in the system, the star might negate that. However, suppose a star contraindicates habitability because of extreme flaring and radiation. In that case, a massive enough planet could shield an exomoon with a protective magnetosphere.

Many other factors determine the habitability of exomoons or even their presence. For example, when planets migrate, they can lose their moons. Some moons can survive this, depending on the physical and orbital parameters of the planet and the moon, and some moons might be captured into orbits around a new planet. But those factors are outside of the scope of this paper.

This work results in a table of exoplanets that have high probabilities of hosting potentially habitable moons. Among the exoplanets with the highest probabilities are some that readers might recognize.

Further down the list is Kepler-458 b, the first rocky super-Earth found within the habitable zone around a sun-like star. It’s sometimes called Earth’s cousin, or Earth 2.0. Its exomoon habitability probability is 60%. Then there’s Kepler-62f. Kepler-62f is considered one of the most promising habitable exoplanet candidates, mainly because it orbits a very stable, extremely long-lived star. Its exomoon habitability probability is 53%.

Proxima Centauri c also makes it onto the list. Its status as a confirmed exoplanet is debated, but it garners attention because it’s so close to us. It’s near the bottom of the list with an exomoon habitability probability of 14%.

Many of the exoplanets on the list are large gas giants. They could host several exomoons, some as large as the small planets in our solar system. When Galileo pointed his telescope at Jupiter, he found four large moons. His discovery was a huge moment in history. Maybe our first exomoon detection will be similar, and we’ll find our first four all at once.

One day we’ll have the technology and methodology to find exomoons more easily. We might soon know of thousands or even tens of thousands of exomoons. This study might help astronomers decide where best to look for habitable ones when that happens.


Citation:
These are the best places to search for habitable exomoons (2022, May 12)