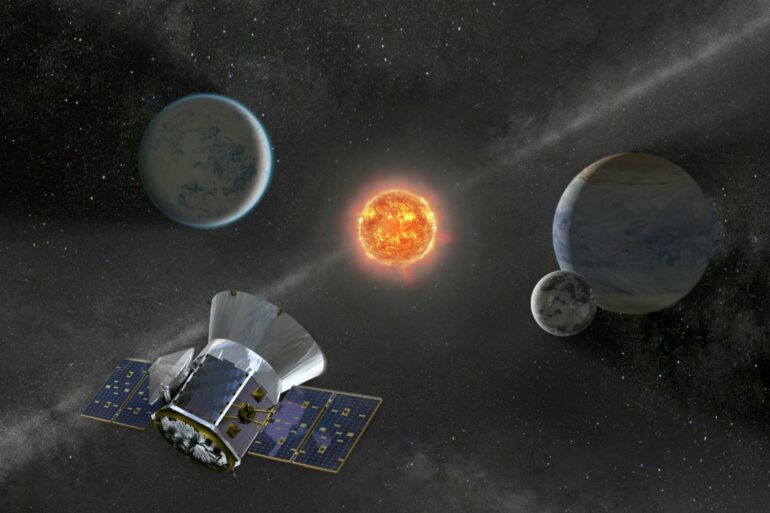 Stars with the mass of the sun or larger are typically accompanied by one or more orbiting companion stars. The system forms when gravity contracts the gas and dust of an interstellar cloud until clumps develop that are dense enough to coalesce into stars. Multiple stellar systems develop, according to one model, when the cloud has a slight spin. That generates a disk that then fragments to produce multiple stars.

In a competing model, turbulence in the cloud prompts clumps to fragment into multiple systems. When the orbit of a pair of binary stars happens to fall along our line-of-sight, the stars form an eclipsing binary. Ordinary, roughly solar-mass-sized eclipsing binaries have typical periods of days. Triplet stellar systems can also be eclipsing, but because the third star in a typical triplet orbits farther out (it is farther in order for the system to remain relatively stable and not eject one of the stars), its period is closer to a year and longer monitoring is needed to spot and study them. To date over a million known eclipsing binary systems are known, but only twenty triply eclipsing systems have been published.

Triply eclipsing systems as well as binaries offer the benefit of enabling astronomers to measure reliably several otherwise degenerate physical characteristics of the systems including orbital inclinations and eccentricities and, combined with other data, the stellar masses, radii, ages, temperatures, and chemical compositions (“metallicity”). In eclipsing triples, however, complex dynamical interactions occurring over short timescales can be studied as well. Not least, the statistics of eclipsing triplets also shed light on formation mechanisms of these systems, details that can be compared to simulations.

CfA astronomer Willie Torres was part of a team that used transiting observations from TESS (the Transiting Exoplanet Survey Satellite) to spot about fifty new triply eclipsing systems, twenty of them with reliable orbits for all three stars. The team reports on six of these eclipsing triplets for which ancillary data has enabled a more complete description of the characters of the stars. All six stellar systems are relatively old, about a billion years. All six are seen nearly edge-on with the inner binary sometimes eclipsing the outer tertiary star and sometimes vice versa.

The masses of all twelve stars in the inner binary system are in the range of .7 to 1.8 solar-masses and all of the stars are in their main-sequence phase of their lifetimes; the six tertiary stars are all larger, with masses ranging from 1.5 to 2.3 solar-masses. The authors conclude by discussing the statistics of these systems, finding that about 0.02% of close binaries host a third star in a flat configuration like their current set—implying that there are probably several hundred thousand of them in our galaxy. They also note possible links between triplets and even more complex stellar systems like so-called “2 plus 2 compact quadruple systems.”