What part of a space rock survives all the way to the ground? 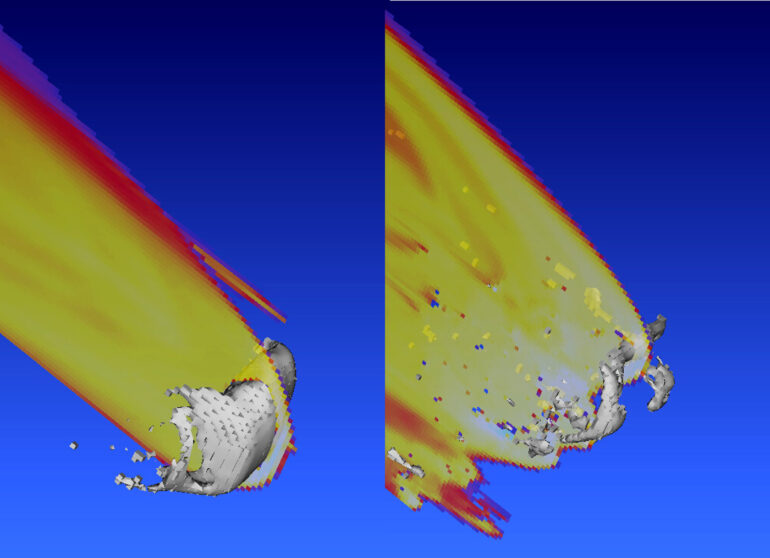 When a small asteroid enters Earth’s atmosphere from space, its surface is brutally heated, causing melting and fragmenting. Therefore, why the rocks near the surface survive to the ground as meteorites has been somewhat of a mystery. That mystery is solved in a new study of the fiery entry of asteroid 2008 TC3, published online today in Meteoritics and Planetary Science.

“Most of our meteorites fall from rocks the size of grapefruits to small cars,” says lead author and meteor astronomer Peter Jenniskens of the SETI Institute and NASA Ames Research Center. “Rocks that big do not spin fast enough to spread the heat during the brief meteor phase, and we now have evidence that the backside survives to the ground.”

In 2008, a 6-meter-sized asteroid called 2008 TC3 was detected in space and tracked for over 20 hours before it hit the Earth’s atmosphere, creating a bright meteor that disintegrated over the Nubian Desert of Sudan. The breakup scattered a shower of meteorites over a 7 x 30 km area. Jenniskens collaborated with University of Khartoum professor Muawia Shaddad and his students to recover these meteorites.

“In a series of dedicated search campaigns, our students recovered over 600 meteorites, some as big as a fist, but most no bigger than a thumbnail,” says Shaddad. “For each meteorite, we recorded the find location.”

While conducting grid searches perpendicular to the asteroid path, the researchers were surprised to find that the larger fist-sized meteorites were spread out more than the smaller meteorites. Teaming up with NASA’s Asteroid Threat Assessment Project (ATAP) at NASA Ames Research Center, they decided to investigate.

“While the asteroid approached Earth, its brightness flickered from spinning and tumbling,” says theoretical astronomer Darrel Robertson of ATAP. “Because of that, asteroid 2008 TC3 is unique in that we know the shape and orientation of the asteroid when it entered Earth’s atmosphere.”

Robertson created a hydrodynamic model of the entry of 2008 TC3 into Earth’s atmosphere that showed how the asteroid melts and breaks up. The observed altitudes of meteor brightness and dust clouds were used to calibrate the altitude of phenomena recognized in the model.

“Because of the high speed coming in, we found that the asteroid punched a near vacuum wake in the atmosphere,” says Robertson. “The first fragments came from the sides of the asteroid and tended to move into that wake, where they mixed and fell to the ground with low relative speeds.”

While falling to the ground, the smallest meteorites were soon stopped by friction with the atmosphere, falling close to the breakup point, while larger meteorites were harder to stop and fell further downrange. As a result, most recovered meteorites were found along a narrow 1-km wide strip in the asteroid’s path.

No longer trapped by the shock from the asteroid itself, the shocks from the individual pieces now repulsed them, sending these final fragments flying outwards with much higher relative speed.

“The largest meteorites from 2008 TC3 were spread wider than the small ones, which means that they originated from this final collapse,” said Jenniskens. “Based on where they were found, we concluded that these pieces stayed relatively large all the way to the ground.”

The location of the large meteorites on the ground still reflects their location in the back and bottom-back part of the original asteroid.

“This asteroid was a mixed bag of rocks,” said co-author Cyrena Goodrich of the Lunar and Planetary Institute (USRA). Goodrich led a team of meteoriticists who determined the meteorite type of each recovered fragment in the large mass area.

A lunar return, a Jupiter moon, the most powerful rocket ever built and the James Webb Space Telescope – space missions to watch in the coming months

“That agrees with the fact that other meteorites of this kind, albeit on a much smaller scale, also contain random mixtures,” said Goodrich.

These results may also help understand other meteorite falls. Asteroids are exposed to cosmic rays while in space, creating a low level of radioactivity and more near the surface.

“From that radioactivity, we often find that the meteorites did not come from the better-shielded interior,” said Jenniskens. “We now know they came from the surface at the back of the asteroid.”