Zipping up data to zap it back from an icy moon 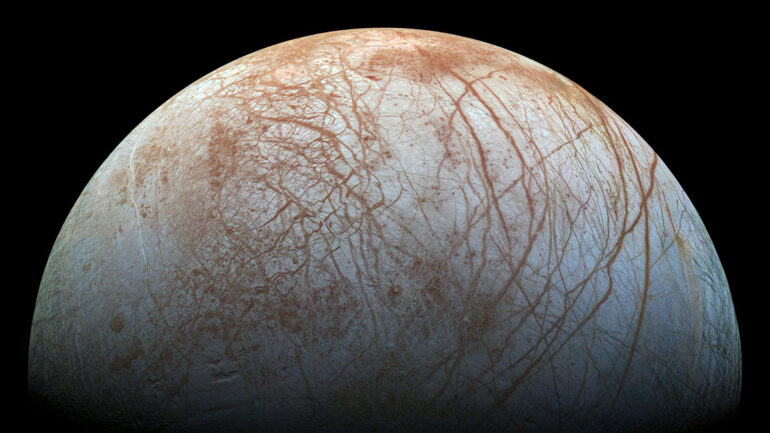 In the search for life beyond Earth, icy ocean moons like Jupiter’s Europa and Saturn’s Enceladus are promising possibilities that host potentially habitable environments. Evidence of these environments—and of possible geobiological activity—may be observable at these moons’ surfaces because of deposition of subsurface fluids by erupting plumes, in pressurized fractures in ice, or through the convective churning of ice.

Organic molecules in living organisms have unique biochemical signatures that can be instrumentally detected, and NASA is currently designing instrumentation for the Ocean Worlds Life Surveyor (OWLS) suite, which could be used in future missions that will land on and sample ice from the surfaces of Europa and Enceladus.

OWLS will include a capillary electrophoresis (CE) and mass spectrometry (MS) instrument that can separate, identify, and quantify distinct chemicals as part of sample characterization. All this sampling, analysis, and cataloging produce large amounts of raw data, however, with each CE-MS sample generating 100 megabytes or more. The problem is, How do you transfer all those data from distant moons back to scientists on Earth?

In a new study published in Earth and Space Science, Mauceri et al. investigate how best to compress and prioritize these data to reduce transmission requirements while keeping the important information from the on-moon instrument intact. To do so, the researchers created onboard software called the Autonomous Capillary Electrophoresis Mass-spectra Examination (ACME).

Using laboratory samples, the team tested how effectively the ACME system could detect signal peaks—corresponding to concentrations of different molecules—within raw CE-MS data. The researchers also simulated how information from the sampling exercise could be compressed and transmitted. They found that ACME could summarize and compress raw data by 2–3 orders of magnitude while preserving the most scientifically relevant information.

The researchers note that ACME can also prioritize which data to transmit by assessing the presence of potentially important compounds in a sample. In the future, these capabilities will help researchers target key areas for sampling and maximize the scientific return of missions to icy moons.