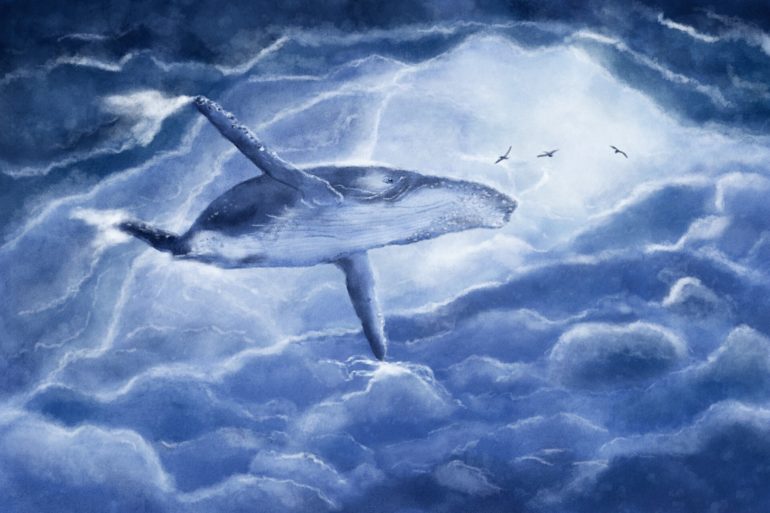 Decades of research have been dedicated to understanding humpback whale songs. Why do they sing? What and where is the intended audience of these songs? To help uncover the answers, many scientists have framed whale songs as something similar to bird songs: vocalizations designed for attracting potential mates, or warnings to competitors.

But for the past several years, a University at Buffalo researcher has been proposing a radically different story about whale songs. His latest study, published in the journal Animal Cognition, presents additional evidence to strengthen his argument for a departure from treating whale songs as the underwater analog to bird songs.

The findings reveal the changing nature of the units within whale songs, and the way those units further morph through the years. These changes present a vocal flexibility that demonstrates the inadequacy of using human labels, likes cries, chirps and moans, for a species with the capacity for much more sophisticated sound production.

“The analyses in this paper suggest that we shouldn’t be thinking about whale songs as language or musical notes,” says Eduardo Mercado, Ph.D., a professor of psychology in UB’s College of Arts and Sciences. “What the singers are doing seems to be much more dynamic, both within songs and across years.

“Maybe it’s a matter of switching from thinking about whale songs as musical notes to something more freeform, like dancing.”

Current hypotheses assume whales combine sounds (units) into patterns (phrases) to construct the displays (songs) that reveal their fitness to possible mates. From this perspective, Mercado says, single units are like individual quills in a peacock’s tail, each functionally equal, and useful only as a collective.

But the units are not functionally equal, according to Mercado’s paper, co-written with Christina E. Perazio, an assistant professor at the University of New England. The unit morphing produces some units that are much less detectable than others, a finding that challenges previous conclusions regarding fitness in favor of the songs instead revealing locations and movements, with each change making relevant units easier to hear across long distances.

To help make his point, Mercado alludes to the revision made to the barnyard moral code in George Orwell’s “Animal Farm” in the title of his paper, suggesting that some humpback units “are more equal than others.”

“There are clear differences in the units when listening to whale songs from different years,” says Mercado. “They’re so different that it’s like switching from one musical genre to another. In any given year, the whales are using an altogether different set of sounds.”

So, what’s going on? Is it all random?

Not likely, according to Mercado.

Mercado relied on a method that collected detailed measures of variations in units produced by singers and then compared those measures to characteristics produced in different years. This approach emphasized variability in vocal behavior rather than summaries of “unit types.”

“These changes are what got me interested in whale songs,” says Mercado. “I was trying to understand how they get away with this. If they’re changing sounds, how are other whales making sense of those changes? Imagine people with no preparation just shifting languages several times over a 10-year span and everyone continuing to understand everyone else despite that variation.”

The changes appear evolutionary in nature, not random. The modifications adhere to a clear set of rules, like maintaining pitch ranges even when the sounds appear subjectively to be varying quite a bit. The morphing of these units might contribute to the overall function of the songs, possibly by increasing the number of positions from which listening whales can reliably detect, localize and track them.

That flexibility further reveals the shortcomings inherent in subjective or computational methods for sorting units into discrete categories that don’t capture nuances of vocalizations.

“These labels are a bad idea,” says Mercado. “Shifts in pitch and duration might force an incorrect re-categorization of units. We might think we’re hearing something different, but the whale might be saying nothing has changed.”

Mercado adds, “Humans are not the gold standard for distinguishing sounds, and we have to acknowledge and respect that when conducting research.”

Study: Humpback whales aren’t learning their songs from one another


Citation:
Study shows a whale of a difference between songs of birds and humpbacks (2021, September 1)
retrieved 1 September 2021
from https://phys.org/news/2021-09-whale-difference-songs-birds-humpbacks.html