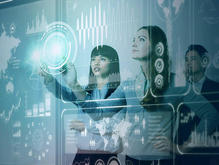 Managing AI and ML in the Enterprise

The AI and ML deployments are well underway, but for CXOs the biggest issue will be managing these initiatives, and figuring out where the data science team fits in and what algorithms to buy versus build.

The earnings landed shortly after C3 AI outlined a strategic alliance with Google Cloud to co-sell and service the company’s AI applications.

C3 AI said its partnership with Microsoft was paying off with deals worth more than $200 million to date. C3 AI also expanded its footprint in various industries.

Historically, our business has been characterized by quarter-to-quarter lumpiness due to the substantial size of our average order value. Now as application sales become an increasingly large part of our revenue mix, roughly 50% of our subscriptions last quarter in Q1 accrued from application software. We are increasingly offering lower-priced high-value products like C3 AI CRM and Ex Machina. We’ve been diversifying our distribution model to complement enterprise selling with telesales, distributors, market partners and direct marketplace selling.

Bottom line, our performance in the first quarter was strong across the board, and we’re planning for continued growth in this year and accelerated growth next year.

Later in the call, Siebel also noted that Google Cloud will be a big help accelerating growth for C3 AI. Siebel said:

(Google Cloud CEO) Thomas Kurian has really changed the nature of Google Cloud in a big way. I think they’ve gone from maybe 400 sales people of a couple of years ago who were kind of middleware salespeople to the order of 4,000 salespeople today, and these are kind of experienced enterprise sales men and women.