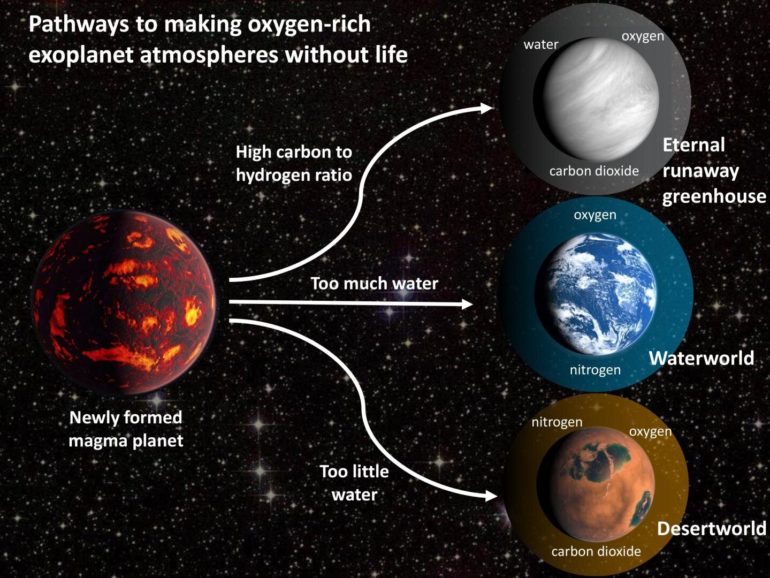 In the search for life on other planets, the presence of oxygen in a planet’s atmosphere is one potential sign of biological activity that might be detected by future telescopes. A new study, however, describes several scenarios in which a lifeless rocky planet around a sun-like star could evolve to have oxygen in its atmosphere.

The new findings, published April 13 in AGU Advances, highlight the need for next-generation telescopes that are capable of characterizing planetary environments and searching for multiple lines of evidence for life in addition to detecting oxygen.

“This is useful because it shows there are ways to get oxygen in the atmosphere without life, but there are other observations you can make to help distinguish these false positives from the real deal,” said first author Joshua Krissansen-Totton, a Sagan Fellow in the Department of Astronomy and Astrophysics at UC Santa Cruz. “For each scenario, we try to say what your telescope would need to be able to do to distinguish this from biological oxygen.”

In the coming decades, perhaps by the late 2030s, astronomers hope to have a telescope capable of taking images and spectra of potentially Earth-like planets around sun-like stars. Coauthor Jonathan Fortney, professor of astronomy and astrophysics and director of UCSC’s Other Worlds Laboratory, said the idea would be to target planets similar enough to Earth that life might have emerged on them and characterize their atmospheres.

“There has a been a lot of discussion about whether detection of oxygen is ‘enough’ of a sign of life,” he said. “This work really argues for needing to know the context of your detection. What other molecules are found in addition to oxygen, or not found, and what does that tell you about the planet’s evolution?”

This means astronomers will want a telescope that is sensitive to a broad range of wavelengths in order to detect different types of molecules in a planet’s atmosphere.

The researchers based their findings on a detailed, end-to-end computational model of the evolution of rocky planets, starting from their molten origins and extending through billions of years of cooling and geochemical cycling. By varying the initial inventory of volatile elements in their model planets, the researchers obtained a surprisingly wide range of outcomes.

Oxygen can start to build up in a planet’s atmosphere when high-energy ultraviolet light splits water molecules in the upper atmosphere into hydrogen and oxygen. The lightweight hydrogen preferentially escapes into space, leaving the oxygen behind. Other processes can remove oxygen from the atmosphere. Carbon monoxide and hydrogen released by outgassing from molten rock, for example, will react with oxygen, and weathering of rock also mops up oxygen. These are just a few of the processes the researchers incorporated into their model of the geochemical evolution of a rocky planet.

“If you run the model for Earth, with what we think was the initial inventory of volatiles, you reliably get the same outcome every time—without life you don’t get oxygen in the atmosphere,” Krissansen-Totton said. “But we also found multiple scenarios where you can get oxygen without life.”

For example, a planet that is otherwise like Earth but starts off with more water will end up with very deep oceans, putting immense pressure on the crust. This effectively shuts down geological activity, including all of the processes such as melting or weathering of rocks that would remove oxygen from the atmosphere.

In the opposite case, where the planet starts off with a relatively small amount of water, the magma surface of the initially molten planet can freeze quickly while the water remains in the atmosphere. This “steam atmosphere” puts enough water in the upper atmosphere to allow accumulation of oxygen as the water breaks up and hydrogen escapes.

“The typical sequence is that the magma surface solidifies simultaneously with water condensing out into oceans on the surface,” Krissansen-Totton said. “On Earth, once water condensed on the surface, escape rates were low. But if you retain a steam atmosphere after the molten surface has solidified, there’s a window of about a million years when oxygen can build up because there are high water concentrations in the upper atmosphere and no molten surface to consume the oxygen produced by hydrogen escape.”

A third scenario that can lead to oxygen in the atmosphere involves a planet that is otherwise like Earth but starts off with a higher ratio of carbon dioxide to water. This leads to a runaway greenhouse effect, making it too hot for water to ever condense out of the atmosphere onto the surface of the planet.

“In this Venus-like scenario, all the volatiles start off in the atmosphere and few are left behind in the mantle to be outgassed and mop up oxygen,” Krissansen-Totton said.

He noted that previous studies have focused on atmospheric processes, whereas the model used in this study explores the geochemical and thermal evolution of the planet’s mantle and crust, as well as the interactions between the crust and atmosphere.

“It’s not computationally intensive, but there are a lot of moving parts and interconnected processes,” he said.

Ancient Earth had a thick, toxic atmosphere like Venus—until it cooled off and became liveable


Citation:
Study warns of ‘oxygen false positives’ in search for signs of life on other planets (2021, April 13)
retrieved 13 April 2021
from https://phys.org/news/2021-04-oxygen-false-positives-life-planets.html