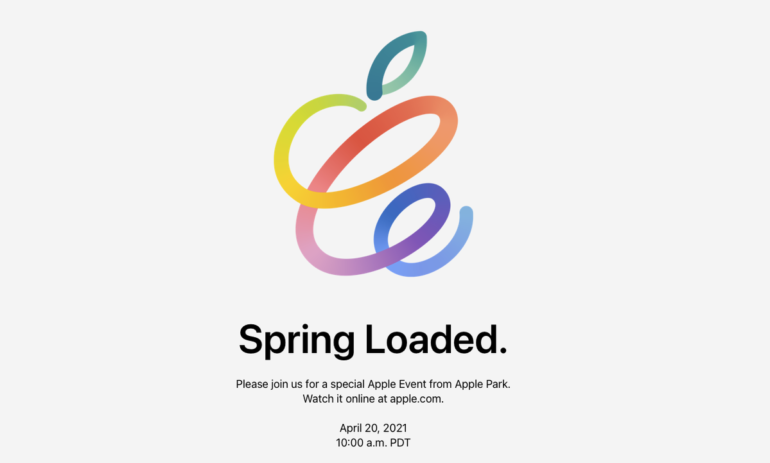 Tuesday morning, Siri let it slip that Apple would hold a special event on April 20 from its campus in Cupertino, CA. Just a few hours later, Apple officially announced the event by sending out invites. The tagline for the event is “Spring Loaded,” and it will indeed take place next week from Apple Park. Apple is once again holding an online-only event, as it did throughout 2020 due to the pandemic, and is the case for WWDC21 which kicks off June 7.

Apple fans usually try to decipher what the artwork in the invite means, and while the artwork here definitely has an Apple Pencil vibe to it, I’ll leave it to others to decide what’s going on.

Apple has had software updates for the iPhone, iPad, Apple TV, Apple Watch and Mac in beta since early February, which is a long time for a mid-cycle update. Usually larger updates, like going from iOS 13 to iOS 14, have a long beta period.

That said, there’s a lot in the suite of software updates Apple is expected to release any day now. For example, Apple’s App Track Transparency (ATT) feature will go live with the upcoming update. With the launch of ATT, Apple will require that users specifically opt-in to allow an app to track them across third-party apps and websites. This, of course, is a controversial feature for any company that relies on tracking to sell and serve ads to users.

The update also includes other new features, such as the ability to unlock a Face ID-equipped iPhone while wearing a face mask. The catch is that you need to have an Apple Watch on your wrist, which acts as a secondary authentication method.

There are many smaller features included as well. From slight tweaks the interface in apps like Apple Music and Podcasts, to new Siri voices — iOS 14.5 (and the corresponding updates across all other Apple devices) has more than just bug fixes and performance improvements.

One feature I’m personally hoping for, and it would fit nicely with a new iPad Pro that Apple is rumored to have ready, is true external monitor support in iPadOS 14.5.

It just feels like there has to be more to the pending updates than what we’ve already seen. We’ll just have to wait and see if that’s true.

It’s expected Apple will announce two new iPad Pro models. One 12.9-inch model, and an 11-inch model. The new iPad Pros will have a similar design to the current 2018/2020 iPad Pro, but instead of a standard USB-C port, the 2021 iPad Pro duo will have a Thunderbolt 4 port, according to Bloomberg.

The larger iPad Pro is also expected to be the first iPad with a Mini LED display that will provide sharper contrast, and a brighter overall picture. Another Bloomberg report indicates Apple suppliers are having issues producing enough Mini LED panels for the new iPad Pro and the larger model will be in short supply at launch.

In addition to a new display and a switch to Thunderbolt, the 2021 iPad Pros are expected to have a processor that’s on par with Apple’s M1 Apple Silicon processor and improved cameras.

With new hardware inside the iPad Pro, we could see more features announced in iPadOS 14.5 that take advantage of a faster processor and Thunderbolt.

The Apple TV is in dire need of an update. Not just a software update, but new hardware. It’s been 3.5 years since Apple released the Apple TV 4K, which is now underpowered and overpriced.

Rumors have circulated about a more robust Apple TV, with a modern processor, a new remote and even perhaps an Apple Arcade gaming controller.

In Apps and WebGamingSmartphones
on 2 June 20213 min read

There’s also been evidence found in the iOS 14.5 beta that hints at 120Hz support. With Apple TVs acting as a HomeKit hub to keep accessories and devices connected, it’d be nice to have Thread support built into the new Apple TV, along with an Ultra-Wideband U1 chip for better automation.

We’ll have to wait and see what exactly Apple has in store for the Apple TV, if anything.

We’ve heard rumors about Apple AirTags for nearly two years now, and they’ve yet to materialize. The small Tile-like device can be attached to everyday objects like your keys, wallet or even a pet. You can then use the Find My app on your Apple device to locate it or mark it as lost. Once a device is marked as lost, Apple crowdsources its location using other Apple devices to anonymously locate its Bluetooth signal and send you an alert of its current location.

Last week, Apple launched third-party support for its Find My network, allowing other companies to integrate with the service. Belkin announced some wireless earbuds that you can track in the Find My app, and Chipolo’s ONE Spot tracker, along with two new e-bikes from VonMoof also work with the new platform.

With the network now fully launched, and with third-party accessories not expected until June, I can see Apple announcing AirTags with immediate availability.

Then again, it’s been this long, maybe Apple will wait until WWDC in June to announce the tags.