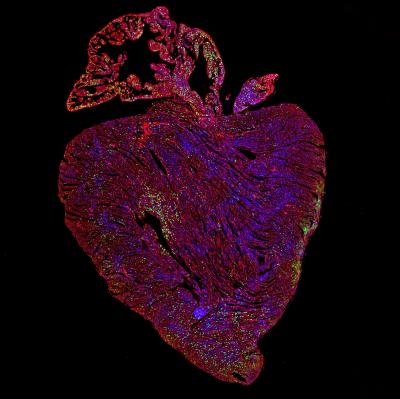 Researchers trying to turn off a gene that allows cancers to spread have made a surprising U-turn. By making the gene overactive and functional in the hearts of mice, they have triggered heart cell regeneration. Since adult hearts cannot usually repair themselves once damaged, harnessing the power of this gene represents major progress towards the first curative treatment for heart disease.

“This is really exciting because scientists have been trying to make heart cells proliferate for a long time. None of the current heart disease treatments are able to reverse degeneration of the heart tissue – they only slow progression of the disease. Now we’ve found a way to do it in a mouse model,” said Dr Catherine Wilson, a researcher in the University of Cambridge’s Department of Pharmacology, who led the study.

The cell cycle – through which cells make copies of themselves – is tightly controlled in mammalian cells. Cancer develops when cells start to replicate themselves uncontrollably, and the Myc gene plays a key role in the process. Myc is known to be overactive in the vast majority of cancers, so targeting this gene is one of the highest priorities in cancer research. Much recent research has focused on trying to take control of Myc as a means of cancer therapy.

When the researchers made Myc overactive in a mouse model, they saw its cancerous effects in organs including the liver and lungs: huge amount of cells started replicating over the course of a few days. But in the…