10 tech innovations that caught our eye 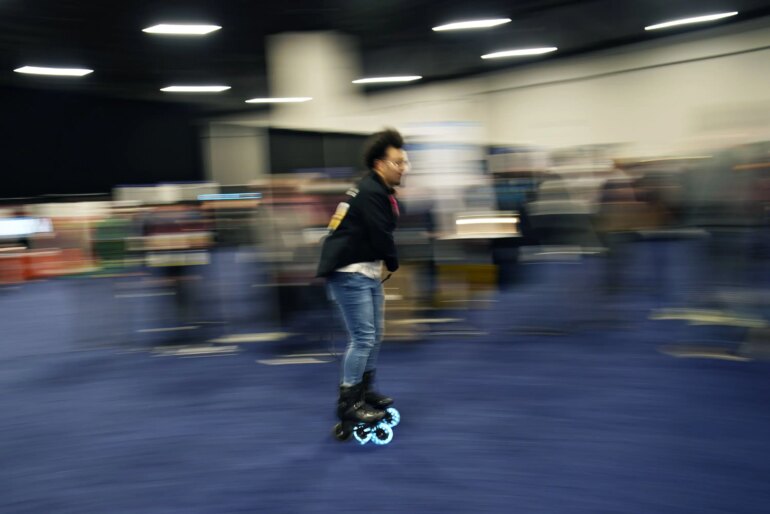 From electric cars and boats to wireless TVs to the latest phones and tablets, there was a wide range of innovations on display at the CES tech show in Las Vegas last week. Some of it aimed to solve big real world problems. Some of it aimed to make your life more fun. And some of it was just a little out there.

Here’s what caught our eye:

MOST FUN WAY TO GET TO WORK

The battery lasts for 20 miles (32 kilometers), said founder Mohamed Soliman, who hopes people will see them as a viable way to commute, like electric bikes or scooters.

“My goal is for everyone to go skating again because it’s so much fun, every time you see people skating you see them with a big smile,” Soliman said.

A waist bag holds the battery and cables connected to the skates. They also can be used as regular skates when they need to be charged or skaters simply want to travel under their own power.

The $500 skates are available for pre-order. The company has taken orders for 150 pairs so far and is aiming for 200 orders to start production.

TECH TO BRING TO A PARTY

The device uses cosmetic-grade ink with a library of thousands of designs or the option to make your own with the company’s app. After picking a tattoo, you just wave the device over wherever you want it applied. The tattoos are waterproof but wash off with soap.

There’s also an accessory to temporarily color your hair.

GE Profile unveiled a smart mixer that lets you weigh your ingredients in the bowl while you’re working.

The mixer also has an auto sensor that can monitor changes in texture and viscosity and adjust speed accordingly. It shuts itself off automatically to avoid overmixing.

And it has voice control so you don’t have to stop what you’re doing and wash your hands off to operate it.

All that precision doesn’t come cheap—the mixer costs $999.95 and is only available at Crate & Barrel.

TECH TO BUY YOUR PARENTS

Bird Buddy showed off a smart bird feeder that takes snapshots of feathered friends as they fly in to eat some treats. The startup says its AI technology can recognize more than 1,000 species of birds, allowing users to share through a mobile app what kind of birds they’re feeding.

“We try to kind of gamify the collection so it’s a really fun game that you can play—almost like a real life Pokémon Go with real animals and wildlife in your backyard,” said Kyle Buzzard, the company’s co-founder and chief hardware officer.

The product has already sparked some interest from consumers who want to show the world what birds are coming into their backyards.

The company, which began as a Kickstarter project in 2020, says it started shipping its bird feeders in September and has already sold all 100,000 in its inventory. The price for the basic feeder is $199.

TECH TO BUY YOUR KIDS

Unveiled by toy maker WowWee, Dog-E has more than a million possible combinations of lights, sounds and personality traits.

Dog-E begins as a blank canvas and develops its personality as you set it up.

The app-connected toy has audio sensors to hear sounds, touch sensors on its sides and body, and a tail that you can program to display lighted icons and messages when it wags.

Jessica Kalichman from WowWee says it’s a good option for those who can’t commit to owning a real pup, or perhaps for those with allergies.

“I do think for anyone that’s either not ready to have a dog yet, this is a great test to take care of it, learn to feed it, nurture it, and really have that trial run for a family,” she said.

WowWee expects to have Dog-E in stores in September. It will sell for $79. The app to control the toy’s movements does not require a subscription.

Knowing exactly when an avocado is perfectly ripe may sound a bit niche, but Dutch startup OneThird thinks it’s a key to helping reduce food waste.

The company unveiled an avocado scanner designed for supermarkets that’s currently being tested in Canada and can tell you whether an avocado is still firm or ready to eat.

OneThird already works with growers, distributors and others along the supply chain to predict the shelf life of avocados, tomatoes, strawberries and blueberries and is working to add more produce.

According to the United Nations, nearly a third of food of all food globally is thrown away. Reducing that would mean less food waste being tossed into methane-producing landfills.

Have you ever wondered what your dog would say if it could speak to you?

FluentPet promises the next best thing—buttons the company says you can train your pet to push if it’s hungry, needs to go outside or wants to play.

The buttons come in a hexagon-shaped plastic mat called a hextile. Hextiles can be connected to each other to form a bigger collection of buttons.

“We find that actually when dogs kind of know that they’re being understood because they have the precision and specificity of the buttons, then they complain less because they’re no longer wondering whether they actually communicated what they wanted to,” said Leo Trottier, FluentPet CEO.

At CES, the company announced FluentPet Connect, a new app that notifies owners when their dog presses a button and collects data on how the buttons are used.

Fluent Pet’s starter kit comes with hextiles, a speaker and six buttons for $159.95. The app does not require a subscription.

TECH TO MAKE YOUR NEXT CONFERENCE CALL MORE EXCITING

Tired of the same old videoconference calls? Zero Distance thinks it may have the answer.

The company’s Wehead device helps people at a meeting feel like a remote attendee is in the room with them.

The device looks something like a machine you might find at the eye doctor, but with screens on the front. The person participating from afar looks like they’re there in 3D and when they look around or nod, the machine also moves.

“If there are a few people around the table and just one screen, not everybody can see the screen, and the person in the laptop, he or she is not able to see everybody,” Wehead creator Ilia Sedoshkin said. “That’s the obvious application.”

“But for people who spend like 40 hours a week in their home office, they don’t see other people a lot. So feeling the real person in the room, using some space on your table, can give you less loneliness,” Sedoshkin said.

INNOVATION WE MOST WANTED TO TAKE HOME

The soft, fluffy pillow gently expands and contracts, vibrating as you hold it against your stomach. The idea is that you’ll breathe more slowly and deeply as your breath starts to synch with the movement of the pillow.

It was developed based on research done at the University of Tokyo.

Yukai CEO Shunsuke Aoki said the pillow can help remote workers who struggle to switch off from their jobs.

The version on display at CES is a prototype. The company is looking for partners and hopes to start producing it this year.

“I’ve wanted to get into the tech world for the longest time,” Abdul told The Associated Press, “but I wanted to do it in a way that was authentic to who I am.”

Starting at $199, the sunglasses feature a five-hour battery life and play audio from the arms of the frames via Bluetooth connectivity. You can listen to music or answer calls.

The Grammy- and Emmy-award winning artist’s first collection of eyewear is available in seven colors, with polarized and blue light filter lenses.