A step toward producing solar fuels out of thin air 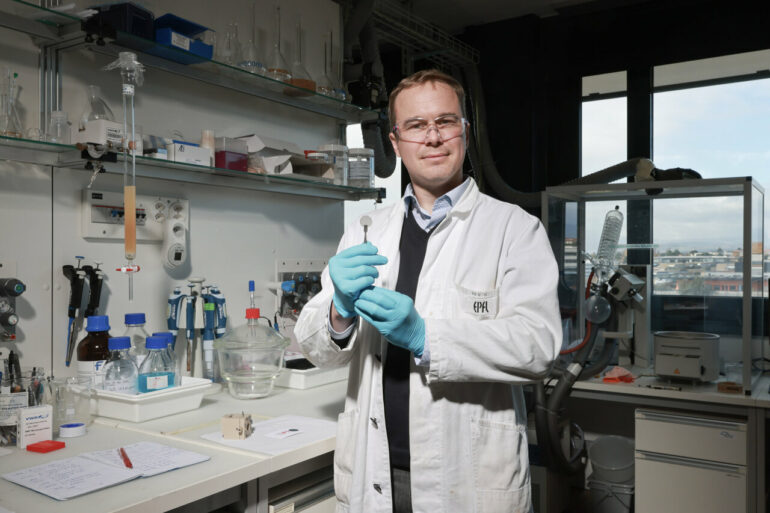 A device that can harvest water from the air and provide hydrogen fuel—entirely powered by solar energy—has been a dream for researchers for decades. Now, EPFL chemical engineer Kevin Sivula and his team have made a significant step toward bringing this vision closer to reality. They have developed an ingenious yet simple system that combines semiconductor-based technology with novel electrodes that have two key characteristics: they are porous, to maximize contact with water in the air; and transparent, to maximize sunlight exposure of the semiconductor coating. When the device is simply exposed to sunlight, it takes water from the air and produces hydrogen gas. The results have been published on 4 January 2023 in Advanced Materials.

“To realize a sustainable society, we need ways to store renewable energy as chemicals that can be used as fuels and feedstocks in industry. Solar energy is the most abundant form of renewable energy, and we are striving to develop economically competitive ways to produce solar fuels,” says Sivula of EPFL’s Laboratory for Molecular Engineering of Optoelectronic Nanomaterials and principal investigator of the study.

Inspiration from a plant’s leaf

In their research for renewable fossil-free fuels, the EPFL engineers in collaboration with Toyota Motor Europe, took inspiration from the way plants are able to convert sunlight into chemical energy using carbon dioxide from the air. A plant essentially harvests carbon dioxide and water from its environment, and with the extra boost of energy from sunlight, can transform these molecules into sugars and starches, a process known as photosynthesis. The sunlight’s energy is stored in the form of chemical bonds inside of the sugars and starches.

The transparent gas diffusion electrodes developed by Sivula and his team, when coated with a light harvesting semiconductor material, indeed act like an artificial leaf, harvesting water from the air and sunlight to produce hydrogen gas. The sunlight’s energy is stored in the form of hydrogen bonds.

Instead of building electrodes with traditional layers that are opaque to sunlight, their substrate is actually a 3-dimensional mesh of felted glass fibers.

Marina Caretti, lead author of the work, says, “Developing our prototype device was challenging since transparent gas-diffusion electrodes have not been previously demonstrated, and we had to develop new procedures for each step. However, since each step is relatively simple and scalable, I think that our approach will open new horizons for a wide range of applications starting from gas diffusion substrates for solar-driven hydrogen production.”

From liquid water to humidity in the air

Sivula and other research groups have previously shown that it is possible to perform artificial photosynthesis by generating hydrogen fuel from liquid water and sunlight using a device called a photoelectrochemical (PEC) cell. A PEC cell is generally known as a device that uses incident light to stimulate a photosensitive material, like a semiconductor, immersed in liquid solution to cause a chemical reaction. But for practical purposes, this process has its disadvantages; e.g., it is complicated to make large-area PEC devices that use liquid.

Sivula wanted to show that the PEC technology can be adapted for harvesting humidity from the air instead, leading to the development of their new gas diffusion electrode. Electrochemical cells (e.g., fuel cells) have already been shown to work with gases instead of liquids, but the gas diffusion electrodes used previously are opaque and incompatible with the solar-powered PEC technology.

Now, the researchers are focusing their efforts into optimizing the system. What is the ideal fiber size? The ideal pore size? The ideal semiconductors and membrane materials? These are questions that are being pursued in the EU Project Sun-to-X, which is dedicated to advance this technology, and develop new ways to convert hydrogen into liquid fuels.

In order to make transparent gas diffusion electrodes, the researchers start with a type of glass wool, which is essentially quartz (also known as silicon oxide) fibers and process it into felt wafers by fusing the fibers together at high temperature. Next, the wafer is coated with a transparent thin film of fluorine-doped tin oxide, known for its excellent conductivity, robustness and ease to scale-up.

These first steps result in a transparent, porous, and conducting wafer, essential for maximizing contact with the water molecules in the air and letting photons through. The wafer is then coated again, this time with a thin-film of sunlight-absorbing semiconductor materials. This second thin coating still lets light through, but appears opaque due to the large surface area of the porous substrate. As is, this coated wafer can already produce hydrogen fuel once exposed to sunlight.

In Apps and WebCompaniesGamingSmartphones
on 13 November 20208 min read

The scientists went on to build a small chamber containing the coated wafer, as well as a membrane for separating the produced hydrogen gas for measurement. When their chamber is exposed to sunlight under humid conditions, hydrogen gas is produced, achieving what the scientists set out to do, showing that the concept of a transparent gas-diffusion electrode for solar-powered hydrogen gas production can be achieved.

While the scientists did not formally study the solar-to-hydrogen conversion efficiency in their demonstration, they acknowledge that it is modest for this prototype, and currently less than can be achieved in liquid-based PEC cells. Based on the materials used, the maximum theoretical solar-to-hydrogen conversion efficiency of the coated wafer is 12%, whereas liquid cells have been demonstrated to be up to 19% efficient.


Citation:
A step toward producing solar fuels out of thin air (2023, January 4)