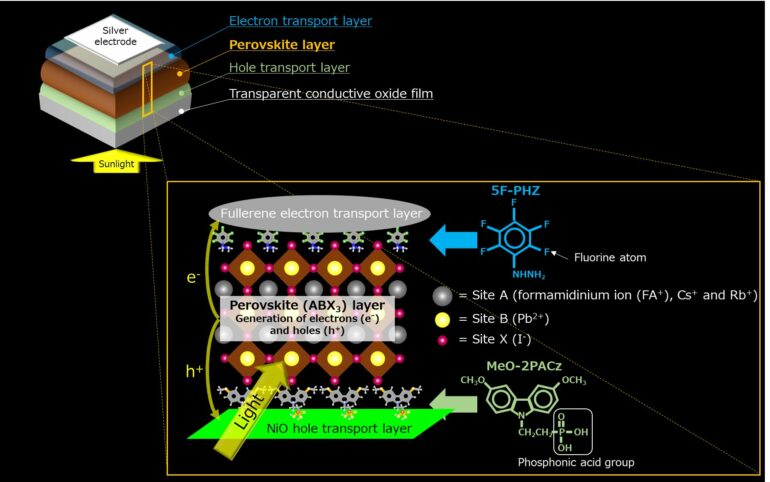 NIMS has developed a durable 1-cm2 perovskite solar cell capable of generating electricity for more than 1,000 continuous hours at a photoelectric conversion efficiency (i.e., power generation efficiency) of more than 20% in exposure to sunlight. Because this solar cell can be fabricated on the surface of a plastic material at approximately 100°C, this technique may be used to develop light, versatile solar cells.

Solar cells have been a vital component of decarbonization policies, making them the subject of intense research around the globe. Perovskite solar cells are a potentially promising next-generation solar cell technology because they can be produced more easily and at lower cost than conventional solar cells. However, perovskite solar cells also have disadvantages: they are prone to degradation when they react with water molecules and it had proven difficult to make them both durable and highly efficient.

This research team added a hydrazine derivative containing water repellent fluorine atoms (5F-PHZ) to the interface between the electron transport layer and the perovskite layer (composed of a crystalline structure, FA0.84Cs0.12Rb0.04PbI3, which can be expressed simply by ABX3, where A = a combination of formamidinium ions (FA+), Cs+ and Rb+; B = Pb2+; and X = I–).

The study is published in Advanced Energy Materials. In future research, the team plans to develop even more efficient and durable perovskite solar cells by creating a database of molecules that can be integrated into the interface, conducting data-driven research and designing molecules that can be used to improve interfacial properties.

Samsung Galaxy A52 5G might launch in India soon

In Apps and WebGamingSmartphones
on 5 May 20212 min read