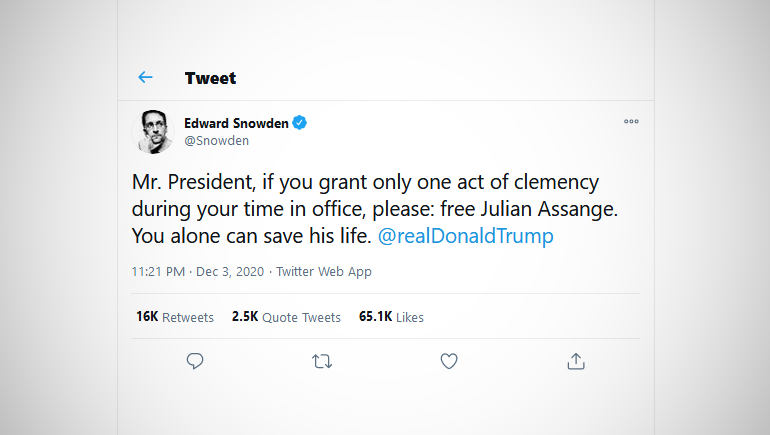 “Mr. President, if you grant only one act of clemency during your time in office, please: free Julian Assange. You alone can save his life,” Snowden tweeted.

Assange, who has gained international fame for founding the WikiLeaks portal, is currently in custody in London, UK.

He was arrested in April 2019 for breaking pre-trial release conditions in a 2012 UK case.

At the time, Assange absconded and requested political asylum in the Ecuador embassy in London, where he lived until his arrest in 2019 when Ecuadorian officials withdrew the WikiLeaks founder’s asylum status.

US authorities formally charged Assange for conspiring to leak US classified materials a month after his arrest. The indictment was updated a month later to include accusations that Assange tried to recruit famous hacker groups like Anonymous and LulzSec to carry out hacks on his behalf and steal sensitive files to publish on WikiLeaks.

The WikiLeaks founder has been fighting the extradition case ever since his arrest, but a first ruling is expected on January 4, 2021.

Assange has repeatedly threatened to commit suicide if extradited to the US, threats that his lawyers have been using as the central piece of their defense case — and the reason why Snowden mentioned that a pardon from Trump would save Assange’s life.

Last week, Tulsi Gabbard, a House representative for the state of Hawaii, also asked Trump to pardon both Assange and Snowden. In October, Gabbard also introduced a bill to have the 2013 legal case against Edward Snowden dropped and allow the former NSA threat analyst to return to the US.

However, the pardon requests may come at a bad time for Trump, recently embroiled in a bribery-for-pardon scheme.