How Leverage: Redemption brings a fan-favorite TV show back from the dead 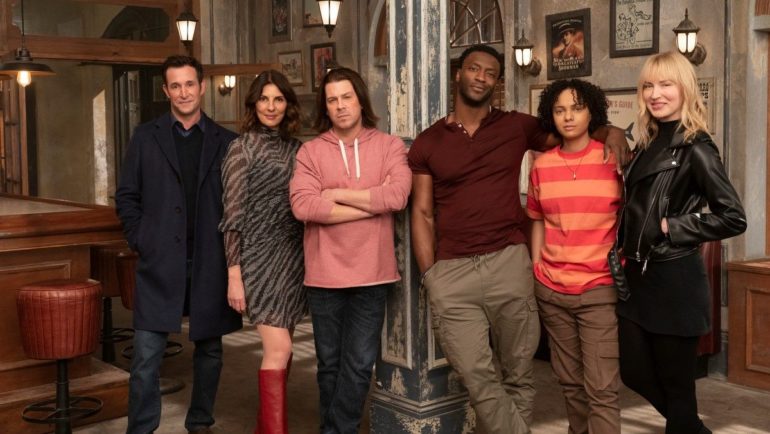 When Leverage first premiered back in 2008, its simple premise of five thieves who use their skills to help regular people fight the injustices inflicted on them by the rich and powerful made for charming and addictive TV. That formula was only enriched by fun character dynamics that evolved over the course of five seasons as the team became a family.

It’s no wonder it inspired such a fervent fan base, so much so that when the original run was cancelled in December 2012, it still went on to be nominated and ultimately win a People’s Choice Award the following year.

Fans’ love of the show hasn’t abated in the years since Leverage went off the air, and now almost a decade later they’ve been rewarded with a revival series featuring many of the original characters we came to know and love – this time on IMDb TV, the ad-supported US streaming service.

“There had been a couple of false starts of excitement. At one point, we heard something about a movie,” says Beth Riesgraf, who returns as Parker – the world’s greatest thief – in the new series. “I think enough time had passed that part of me just thought you know what, this was a moment captured in time that will always be really special to me, but it doesn’t seem like it’s coming back. Then when the tides turned and we got the call, I’m pretty sure I started screaming with excitement and disbelief at the same time.”

The one member of the original ensemble who had an inkling as to what was in the works is Christian Kane, who is back once again as the team’s formidable hitter, Elliot Spencer. Having worked with series’ creator Dean Devlin on multiple projects post-Leverage – including The Librarians and Almost Paradise – he was always aware of the reboot’s status.

“Dean would give me little snippets here and there,” Kane recalls. “It was almost to the point where I wish he’d stop talking about it because I’d get my hopes up so bad! We were out in the Philippines doing Almost Paradise and I had a lot shorter hair. Dean came out to direct the last episode, and he looked at me and said ‘stop cutting your hair.’ I knew exactly what that meant, and I just got so excited. That’s how I found out that Leverage is coming back.”

While many aspects of Leverage: Redemption will be familiar to fans, there’s a lot about the revival that’s different too. The biggest change? For circumstances that are quickly explained in the first episode, the team will be without their former leader and mastermind Nathan Ford, who was played by Timothy Hutton in the original five season run. It’s a ballsy move that will doubtless generate much discussion among fans as the series premieres.

“There was definitely a thought of how are people gonna react to this?” says Riesgraf. “But I think knowing what a special run we all had on that first series, and knowing that that wasn’t going anywhere, and that that would stay in everybody’s hearts, and that those experiences would last a lifetime, meant everything to me.”

For Gina Bellman – whose grifter, Sophie Devereaux, got engaged to Ford in the final moments of the original series – it was a chance to evolve her character, who is cajoled back into the con early on after being out of the game for years. “It’s established that Sophie and Nate have had an amazing, fulfilling, committed relationship,” says Bellman. “So I feel that this loss that she has at the beginning of the season is really a springboard to her being in a much better place as a woman. She’s more mature and she’s not so highly strung.”

Ford’s absence means there’s room for some new blood on the team. One such character is Aleyse Shannon’s Breanna, foster sister to Alec Hardison (a returning Aldis Hodge, who is only in the first two episodes). Like her brother, she’s a hacker extraordinaire, but her inexperience on the con occasionally lands her in hot water.

Luckily, Breanna has the world’s greatest thief for a mentor. Parker and Hardison are still together in Redemption, and the idea of the couple having kids was discussed. However, rather than go down that path – given the lives they lead, the child would constantly be at risk – Breanna becoming a part of the Leverage family still gives the show a fresh dynamic to play with. “With the way Breanna came in and the way we take care of one another, that is their family unit,” says Riesgraf.

The other new member of the team stirring things up is Noah Wyle’s Harry Wilson, a former high-powered lawyer who is trying to turn over a new leaf. It’s this character whom the Redemption of the title refers to most, as he comes to terms with some of the bad things he did for worse people as the show develops.

Wyle is another Devlin favorite – he played the lead role in The Librarians, which ran for four seasons – and he relished the opportunity to get stuck into Wilson’s arc. “He meets a whole bunch of bad guys to teach him how to be a good guy, and I love that arc to it,” says Wyle.

“Because, you know, people are really flawed and make mistakes. And right now we’re living in a world where we’re responsible to look at those mistakes and those flaws and act accordingly and change our behavior in the face of it. So this is a season about a guy being made aware of how responsible he really is, how blind he really has been, and how responsible he is to move forward in his life by both rectifying the wrongs but also changing his entire way of life.”

Though Wyle had to endure some hazing (“it was rather extensive and slightly illegal in some states”, he jokes), it didn’t take long for him to be get comfortable with the team, both on and off screen. It also didn’t take long for the OG team to get back to business as normal. One of the many smart decisions of Redemption’s premiere is to have all the fan favorite characters on screen at the same time within the opening minutes, in a sequence complete with the in-jokes and lovable back and forth that came to define the show.

In Apps and WebCybersecurity
on 4 April 20222 min read

“That was the first scene we shot,” says Kane. “It was a long scene, so we all got to play. Dean was very smart about that. Two minutes into it, it was like we never left, you know? And that was the best feeling in the world. We didn’t have to find the characters again. We could just have fun with it.”

The cons are also just as fun and varied as we came to expect all those years ago, with targets that are wholly deserving of some comeuppance. One standout, ‘The Paranormal Hacktivity Job’, sees all the women team up to scare the bad guys straight with a mixture of tech and guile. “Shannon, Riesgraf and I got to riff together on that episode, and it was really fun,” says Bellman. “Aleyse is a bundle of energy. She’s got great comic skills, and she’s a very good comedic actor. We did a lot of little improvisations together in that episode, and I think it really helped to elevate it.”

For Riesgraf, there was also the added challenge of being behind the camera for an episode. Having previously directed two short films in addition to shadowing other filmmakers, she jumped at the chance to finally call the shots on Redemption. “I knew that I felt comfortable with all these people in a way that I wouldn’t necessarily be going into a new set. I also felt confident in my scene partners. We help each other along the way so I can always tell if we don’t feel a take is right or whatever. It was a wild ride.”

It’s not a ride Riesgraf and co would have gotten to go on without the immense fan support that has ensured Leverage hasn’t been forgotten in the nine years it’s been off the air.

Case in point: Elliot and Hardison’s impromptu ‘Two Good Ol’ Boys’ duet in season 5’s ‘The First Contact Job’ has since become a ringtone, taking on a new life of its own. “All of that was improvisation,” says Kane. “Jonathan Frakes was directing that episode and he says he’s Star Trek: The Next Generation’s number one fan. And Jonathan was like, this is kind of weird. And I remember saying what if I sang it along with Hardison? And he loved it. So we just started in private, and now it’s a ringtone on your phone, which I absolutely love.”

More than just ringtones, however, it’s clear that Leverage’s mix of eclectic but harmonious characters and personalities resonated in a big way. “Finding out that someone’s named their baby Parker is incredibly touching,” says Riesgraf. “I’ve had teens reach out over the years who have said that they felt incredibly isolated and alone, and that seeing Parker made them realise there’s other people out there like them and they don’t feel so alone. Interactions like that really mean a lot. That’s why we want to do what we do.”

And now, almost a decade after the book looked to have been closed for good, team Leverage get to do it all over again.

The first eight episodes of Leverage: Redemption are available now on IMDb TV.