Most isolated massive stars are kicked out of their clusters 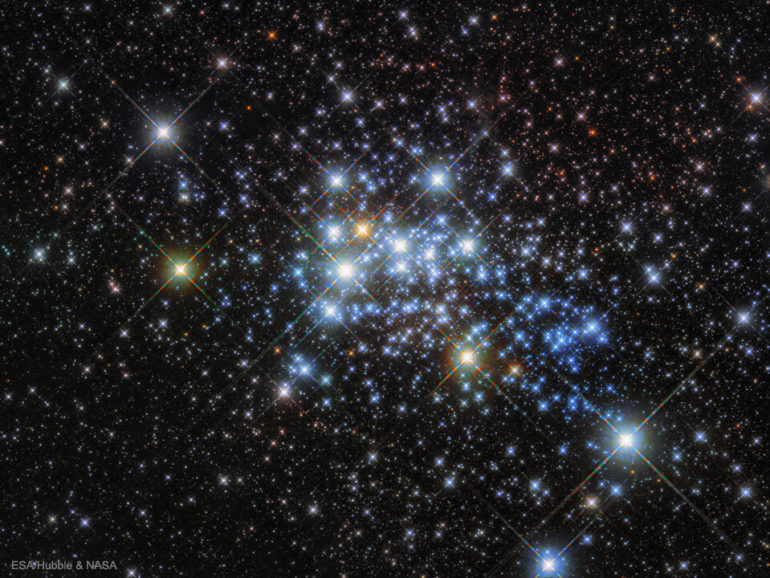 A pair of University of Michigan studies reveals how some massive stars—stars eight or more times the mass of our sun—become isolated in the universe: most often, their star clusters kick them out.

Massive stars typically reside in clusters. Isolated massive stars are called field massive stars. The papers published by U-M students examined most of these stars in the Small Magellanic Cloud, a dwarf galaxy near the Milky Way.

Dorigo Jones shows in his paper that the vast majority of field massive stars are ‘runaways,’ or stars ejected from clusters. Graduate student Irene Vargas-Salazar looked for field massive stars that may have formed in relative isolation by looking for evidence of tiny clusters around them. That means these relatively isolated stars could have formed in conjunction with these smaller stars. But she found very few of these faint clusters.

“Because massive stars require a lot of material to form, there are usually a lot of smaller stars around them,” Vargas-Salazar said. “My project asks specifically how many of these field massive stars could have formed in the field.”

Dorigo Jones examined how field massive stars are ejected from clusters. He looks at the two different mechanisms that produce runaways: dynamical ejection and binary supernova ejection. In the first, the massive stars are ejected from their clusters—by up to half a million miles per hour—because of unstable orbital configurations of stellar groups. In the second, a massive star is ejected when a binary pair has one star that explodes and shoots its companion out into space.

“By having the velocities and the masses of our stars, we’re able to compare the distributions of those parameters to the model predictions to determine the certain contributions from each of the ejection mechanisms,” Dorigo Jones said.

He found that dynamical ejections—ejections caused by unstable orbital configurations—were about 2 to 3 times more numerous than supernova ejections. But Dorigo Jones also found the first observational data that shows a large fraction of the field massive stars came from a combination of both dynamical and supernova ejections.

“These have been studied in the past but we have now set the first observational constraints on the numbers of these two-step runaways,” he said. “The way we reach that conclusion is we’re essentially seeing that the stars that trace the supernova ejections in our sample are a bit too numerous and too fast compared to the model predictions. You can imagine this being remedied by these stars being reaccelerated upon a supernova kick, having first been dynamically ejected.”

The researchers found that potentially up to half of the stars first thought to be from supernova ejections were first dynamically ejected.

Vargas-Salazar’s findings also support the idea that most field massive stars are runaways, but she looked at opposite conditions: she looked for field massive stars that formed in relative isolation in tiny clusters of smaller stars, where the massive target star is, called the “tip of the iceberg, or TIB clusters. She did this using two algorithms, “friends-of-friends” and “nearest neighbors,” to search for those clusters around 310 field massive stars in the Small Magellanic Cloud.

The “friends-of-friends” algorithm measures the number density of stars by counting how many stars there are at a specific distance from the target star and then doing the same for those stars in turn. The more tightly packed the stars are, the more likely it is to be a cluster. The “nearest neighbors” algorithm measures the number density of stars between the target star and its nearest 20 companions. The more compact and denser the group, the more likely they are to be clusters, Vargas-Salazar said.

Using statistical tests, Vargas-Salazar compared these observations with three random-field datasets and compared the known runaway massive stars to nonrunaways. She found that only a few of the field massive stars appeared to have TIB clusters around them, suggesting that very few actually formed in the field. The balance of the field stars must have originated as runaways.

“In the end, we showed that 5% or less of the stars had TIB clusters. Instead, our findings imply that the majority of stars in field samples could be runaways,” Vargas-Salazar said. “Our findings are actually supporting the result that Johnny found, wrapped in a neat little bow.”

Vargas-Salazar’s findings provide part of the answer to the question of how massive stars form, says Sally Oey, senior author on both of the papers and professor of astronomy at U-M.

A dataset for training social robots to interact with the elderly

“Johnny and Irene’s work are flip sides of the same coin,” Oey said. “Irene’s numbers are consistent with Johnny’s in that the vast majority of field massive stars are runaways, but that a few are not. This is a critical finding for understanding how massive stars and clusters form, and in what conditions.”

Star clusters are only the tip of the iceberg


Citation:
Most isolated massive stars are kicked out of their clusters (2020, October 30)
retrieved 1 November 2020
from https://phys.org/news/2020-10-isolated-massive-stars-clusters.html