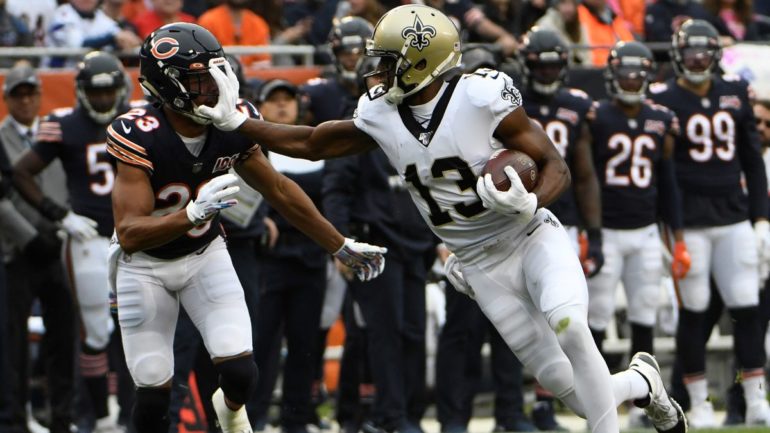 Week 7 could hardly have gone any more differently for these two franchises, with New Orleans blowing the Panthers out of the water despite missing some key personnel, while Chicago’s offense went MIA for their date with the Rams. On that note, has anybody seen them lately at all? Read on as we explain how to watch the NFL online and get a Saints vs Bears live stream wherever you are right now.

Kick-off time for today’s Saints vs Bears game is 4.25pm ET/1.25pm PT, which is 9.25pm GMT in the UK. A number of TV and streaming options are available for the game, and you can always enjoy your favorite NFL coverage wherever you are by using a reliable VPN.

After a less than stellar start, the Saints are now on a three-game winning streak, and last weekend’s victory over Carolina was a fine showing from Drew Brees and running back duo Alvin Kamara and Latavius Murray﻿. The W was never in doubt, despite the absences of star wide receiver Michael Thomas and speedster Emmanuel Sanders.

Are they finally hitting their stride? Quite possibly, but it’s hard to shake the sense that the Black and Gold are still vulnerable on the other side of the ball. Three of their four victories this season have been by a very slim margin, and they’ve only scored six more points than they’ve conceded overall, despite being 4-2.

But the Bears’ wins have been even tighter, so much so that they’re 5-2 despite conceding more points than they’ve scored – the kind of scenario that usually only rears its head in fantasy. Their offense might not be all that, but Matt Nagy’s defense has been rock solid and they’ve been quietly racking up the W’s as a result.

But on Monday, for the first time this season, Chicago’s D showed real signs of weakness, as the Rams managed to put 24 points past them in a game that was widely expected to be a defensive masterclass. Nick Foles was sacked four times and picked twice in another miserable outing for the offense, too.

The good news for the Bears is that it looks like Saints superstar Michael Thomas will have to sit out again as he continues his recovery from an ankle and hamstring injury – and their deep-threat, Sanders, is still out of action as well. The bad? They faced a Saints team missing Brees and Kamara last season, and still couldn’t win. See has it turns out this time round by following our guide below to watch the Saints vs Bears online and get an NFL live stream from anywhere this Sunday.

How to watch the Saints vs Bears from outside your country

Use a VPN to stream NFL football live from anywhere

Today’s Saints vs Bears game is being shown on Fox, with kick-off scheduled for 4.25pm ET/1.25pm PT. If you’ve already got Fox as part of cable you can tune in online via the Fox website.

How to watch Saints vs Bears FREE without cable

If you don’t have cable but still want to catch this and all the NFL games shown on Fox Sports, then Sling TV Blue Package is a top choice. For only $30 per month ($20 for the first) you get Fox Sports, Fox News, TNT, NBC, Comedy Central and a host of other top channels to watch.

Not only that, but you can try out Sling TV absolutely FREE thanks to its 3-day trial. That means you can see all of this weekend’s Fox-based football, and see whether you like what Sling has to offer.

Another option for cord cutters is fuboTV, which carries the likes of Fox, CBS, NBC, ESPN and NFL Network and has a free rial, but takes the monthly costs all the way up to $64.99.

Not interested in signing up for cable or for a streaming service? Yahoo is showing every NFL game that’s being broadcast in your local TV market for free through its Yahoo Sports app, including the Saints vs Bears.

Today’s Saints vs Bears clash kicks off at 4.25pm ET/1.25pm PT in Canada, and linear coverage comes courtesy of CTV.

When it comes to streaming, however, Canadian NFL fans are some of the the luckiest in the world as DAZN includes coverage of every single 2020/21 regular season game.

It’s an absolute steal at just CA$20 a month or $150 a year. Not only do you get every single NFL game, including NFL Game Pass and RedZone access, but DAZN’s also the exclusive Canadian streaming home of Premier League and Champions League soccer!

It comes with support for iOS, Android, Apple TV, Chromecast, Amazon Fire TV, Android TV, Roku, Xbox One, PS4, and laptop/PC streaming (including Mac devices). And if you’ve never used it before, you can take advantage of a FREE 1-month trial, too.

A robot that allows users to virtually navigate remote environments

In RoboticsSmartphones
on 24 February 202110 min read

You can tune in to the Chicago Bears vs New Orleans Saints game via the NFL Game Pass Pro, as £143.99 gets you every single game of the 2020/21 season (subject to blackouts) including the playoffs, Super Bowl, RedZone access and more!

How to watch Bears vs Saints: live stream NFL in Australia

If you live in Australia and want to watch the NFL this season, you have several options to do so and are generally well covered.

The Bears vs Saints game is being shown in Oz via the NFL Game Pass, which gives you access to every game around. Kick-off is set for 8.25am AEDT on Monday morning.

Not in Australia but still want to catch the action on Game Pass? Grabbing a VPN will let you log into an Australia IP address so you can live stream NFL as if you were at home.

If you’re not interested in a subscription just for watching NFL, an average of five games per game week are shown on Foxtel and Kayo Sports.